When I keep telling you that Scott Adams’s blog is required reading, it’s not because I necessarily agree with him. It’s because he has been the only observer that has accurately predicted the rise of Trump – and done so with eerie specificity. If you love Trump, or especially if you hate Trump, Adams is the only reliable source if you want to understand Trump.

His latest post as of this writing is one titled “Outrage Dilution,” and he once again makes a point that nobody else seems to have noticed.

I quote from him at length:

At the moment there are so many [Trump] outrages, executive orders, protests, and controversies that none of them can get enough oxygen in our brains. I can’t obsess about problem X because the rest of the alphabet is coming at me at the same time…

Instead of dribbling out one headline at a time, so the vultures and critics can focus their fire, Trump has flooded the playing field. You don’t know where to aim your outrage. He’s creating so many opportunities for disagreement that it’s mentally exhausting. Literally. He’s wearing down the critics, replacing their specific complaints with entire encyclopedias of complaints. And when Trump has created a hundred reasons to complain, do you know what impression will be left with the public?

He sure got a lot done. [Emphasis in original]

Initially, I read this and decided the conclusion was accurate but incomplete. Yes, the public will conclude, eventually, that Trump did a whole lot in his first few days, but while they may believe Trump has accomplished something commensurate with the noise he has generated, the actual changes to our national life won’t be nearly as remarkable as they think. I then imagined writing a clever post about how Trump is all bluster and no real beef.

And then, today, Trump tried to deport Muslims with green cards.

Permanent residents of the United States – people who have been vetted to every extreme possible and have been given permission to live in this country indefinitely – were told at airports that they couldn’t go home and would have to return to their countries of origin. As a guy who has tried very hard to talk people off the ledge and convince them that Adolf Hitler has not been reincarnated with an orange-ish hue, I find myself seeing a path from kicking out permanent residents because of their religion that leads to fascistic destinations where I insisted we would never, ever go.

Thankfully, the courts stepped in to temper some of Trump’s latest Kristillnachtian impulses, so maybe I was right the first time, and all this will just be noise that won’t amount to much. But increasingly, I find myself feeling like the dog in this cartoon: 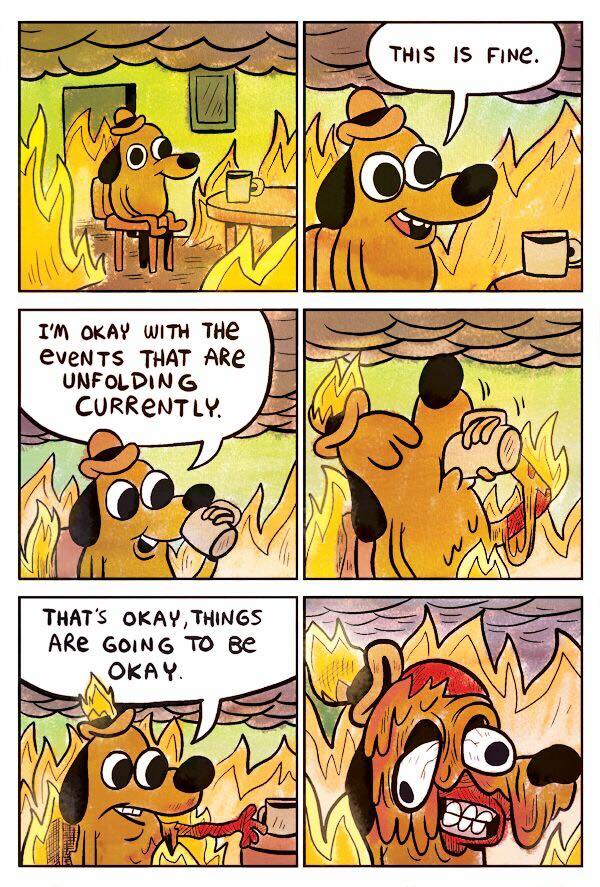 So I got to thinking about Scott Adams and his so-called “outrage dilution,” and I came to realize that he’s on to something even bigger than he initially realized.

Let me step back and recall an article written during the campaign titled “How Paul Krugman Made Donald Trump Possible.” I recommend you read the whole thing, but by way of quick summary, the piece maintains that the full-volume hysteria of the Left about every Republican candidate made it impossible for them to have any remaining credibility when someone as reprehensible as Trump came down the pike. It doesn’t mean much to say Donald Trump is Hitler if you said Mitt Romney was Hitler, too.

The brilliant Camille Paglia long ago pointed out that this was part of the problem the Right had during Obama’s first week. I’ve quoted this before, but her wisdom bears repeating:

Talk radio has been seething with such intensity since Barack Obama’s first week in office that I am finding it very hard to listen to it. How many times do we have to be told the sky is falling? The major talk show hosts, in my opinion, made a strategic error in failing to reset at lower volume after Obama’s election. When the default mode is feverish crisis pitch, there’s nowhere to go, and monotony sets in.

That’s true, but it, too, misses the salient point. Non-stop shrieking isn’t just monotonous – it leaves you powerless if the sky actually begins to fall.

The attempted deportation of permanent residents because of their faith is so egregiously beyond the pale of anything that any president in my lifetime has ever tried to do, or even thought of doing, that I find myself unable to find words to adequately express my revulsion to it. It’s several orders of magnitude worse than anything else Trump has actually done, but since every bit of Trumpism has been greeted with the outrage volume turned up to eleven, there’s no way to differentiate between faux-fascism and the real thing.

So this past week, I’ve seen hyperventilating Facebook posts that Trump has already repealed the Affordable Care Act (he hasn’t), and that he’s already slapped a 20% tariff on Mexican goods (empty rhetoric unless Congress complies), and that the wall has started construction (yes – much of it was already built before Trump took office), that he’s banned overseas abortions (no, he’s only revived a Reagan-era piece of pro-life window dressing that accomplishes nothing), and even that, according to the orgasmically overwrought Keith Olbermann, Trump’s fixation on his inaugural crowd sizes will lead inevitably to nuclear war. (Apologies to those who think “orgasmically overwrought” is too indelicate a phrase, but you have to concede that it’s Olbermannically descriptive.)

This outrage dilution has done more than just make it difficult to respond to every one of them; it’s given the illusion that each of these outrages deserves dollops of outrage in equal measure. Trump’s stupid obsession with his inaugural crowd sizes and his refusal to acknowledge hard data is maddening, yes, but it pales in comparison to the outrage of taking concrete steps to remove legal Americans from their homes because of how they worship. One is stupid; the other is fascist. Fascism deserves exponentially more outrage than run-of-the-mill stupidity.

So now, of course, I have to be concerned that my newfound willingness to drop the F word – i.e. “fascist” – in describing Trump means I’m joining the chorus of wolf-criers. It’s imperative, then, that as the outrages keep coming with relentless fury as Trump continues to tornado through the traditions that have been at the core of this Republic for over two hundred years, we learn to separate what’s truly worthy of outrage and what’s just eye-rollingly dippy.