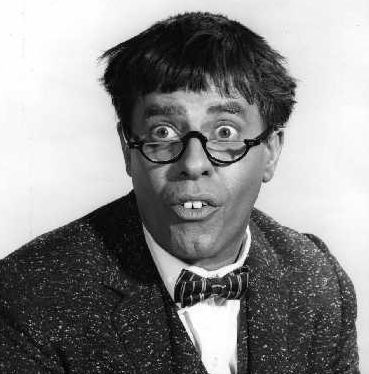 In 1972, Jerry Lewis made a movie called “The Day the Clown Cried” about a clown in a Nazi concentration camp. It has never been released. It is supposedly so awful that Lewis has gone to great lengths to keep it hidden from view, even after he dies.

“You will never see it,” he told Entertainment Weekly. “No one will ever see it, because I am embarrassed at the poor work.”

But while we will never see it, someone else has. Harry Shearer, voice of a thousand Simpsons characters and the bassist for Spinal Tap, claims to have gotten a screening of the notorious film in 1979, and this was his assessment:

With most of these kinds of things, you find that the anticipation, or the concept, is better than the thing itself. But seeing this film was really awe-inspiring, in that you are rarely in the presence of a perfect object. This was a perfect object. This movie is so drastically wrong, its pathos and its comedy are so wildly misplaced, that you could not, in your fantasy of what it might be like, improve on what it really is.

Now I have never seen this film, but yesterday, for perhaps the first time in my life, I was in the presence of a perfect object. Due to bad judgment and an OCD unwillingness to blithely accept asininity, I participated in a Facebook “discussion” with some militant Mormon Trump supporters. Their arguments were so drastically benighted, their spiritual loyalty so wildly misplaced, that I could not possibly, in my attempts to write a fictional brief in support of Donald Trump, improve on the boneheadedness of what they were actually saying.

I’m not going to name names, as my purpose here is not to shame the stupid. Indeed, what they have written here is so pure in its philistine pig ignorance that, in its own awful way, it is a thing of beauty. Behold – a perfect object.

Actually, it’s less than perfect in the sense that I have altered the object from its original form. Below is an edited version of the exchange that will transform it into an essay rather than a series of comments. Other than editing for length, I have made minimal changes. Mostly, I have cleaned up some punctuation and added some white space, as the original author chose to spew this nonsense in solid, unreadable blocks of text.

I believe at Trump’s core he is a good man. I believe he got mixed up in the world for about 10 or 15 years. I believe he has apologized for all the things he has done. (I have seen the videos myself).

We don’t know if [the Access Hollywood] video is real. It could have easily been made up. His voice is easy to copy. And you don’t actually see him say it. It is actually uncharacteristic of him to speak that way. But even if he did at that time he was entangled in Hollywood, and he has come back out of it. Hollywood hates him now. And I believe he feels the same towards it.

[In reference to Trump’s televised comment that if Ivanka weren’t his daughter, he’d probably be dating her],  I had a teacher that said something similar to me thinking it was a compliment. He was the age of Trump. Perhaps it is a generational thing. They consider it a compliment.

I also believe many people cast things upon him that weren’t true just to bring him down or get themselves votes. I believe I can forgive him (seven times seventy at least). I believe he is a different man now. He has stated that he is sacrificing himself so that perhaps he can get into heaven.

He is a charitable man. He does not drink. He loves people and believes in a positive attitude. He recognizes evil and isn’t afraid to stand against it. You may not believe me on all this but I know it all to be true. That is who he is. I studied it out getting headaches every night for a good several months.

We are a bunch of complainers that won’t take time to understand him. Laman and Lemuel were complainers. Trump is a doer. And a thumbs upper. He is doing good things now and that’s what counts. It’s okay if you don’t like his personality, but to completely overshadow his good qualities by the bad is, well, building a wall for unhappiness and unforgivess. What about his positive traits? I love his thumbs upping. I love his positive attitude. And most of the time he is very positive if you can recognize it without looking at him like a pig.

By the way, it is one thing to be mean to people. It is another to speak truth and then have people react in an offended way. He may not say it well, but he is far from a rude man. He speaks truth as it should be – loud and clear. We need that right now.

I just want to throw this out there. I want to show people that Trump is doing exactly the right thing at this time. We know the [Book of Mormon] story of King Benjamin, and if not, then I’ll fill ya in. He was a righteous good king. He had an awesome speech up on the tower and all were converted to Jesus Christ. Before that could happen, he actually had to take action on the wicked.  I bet there were many that were offended by King Benjamin.  I’m not saying Trump is King Benjamin, just saying his actions reflect King Benjamin’s. He wants to round up our enemies. He wants to throw the false preachers (the media) in line and the criminals that have taken over our system in prison. Therefore, they are not bad actions to take.

At the beginning, I couldn’t stand the thought of a man like him being President. And so I prayed. I completely opened my heart to God and His will and said what do you want me to do?!

Now he DID NOT tell me who to vote for. But he did immediately tell me very audibly, “I have paid for him.” And then basically the feeling of “what is that to you if I use him for my work.”  I can’t tell God he is wrong. Seeing through God’s eyes is an incredible journey.

I started looking at everything I could about Trump to see what was desirable about him. I looked for months and months every day getting migraines from all the exhausting work of looking at all angles and reading everything. We’ve had a media who have been lying to us. His strength of his truthful mouth is also his weakness, but he’s getting better at it and I applaud that effort.

What would you do if you were a great person running for president and the whole time people kept misreporting about you and saying you had said or done all these things that you hadn’t actually said or done? You would be frustrated because you would know that wasn’t true. You’d probably even apologize a time or two just to get past the issue. But if you knew you were good that would give you strength to keep you going.

If you knew that you had done those things you would either try to lie about it more or you would shrivel up and not be able to withstand. If you lied some more than you are in cahoots with the devil, right? So he either got there because of the devil or God. The odds were against him. It is a “miracle” that he is there. So it is either a deception or God’s miracle. But like I said, I know his true character and he is good despite the aweful things the media have cast upon him. And I know what God told me and that is enough.

Phew! Sorry, there’s just so much to this and my point is, figure it out and ask God about it. Then maybe you will see. And if not, then you can remain unhappy. But if you come to know what he’s doing then maybe there will be a release from that sadness and you can feel at peace. It’s worth a try. Anywho, thanks for discussing and I’m sure you don’t want to keep this going for days and days. Neither do I. However I am always here for questions.