I’m halfway through the run of Pioneer Theatre Company’s production of “The Will Rogers Follies.” I play Wiley Post, the aviator who was piloting the plane that went down  in Alaska in 1935, claiming the lives of both Rogers and Post as a result. I spend the entire show sitting in the audience, yelling “Let’s go flying, Will” every once in awhile. It’s kind of a running joke until the end of the show, when it finally dawns on everyone as to what happens when Will finally takes me up on my offer.

The subtitle of the plays is “A Life in Revue,” meaning that the events of Will Rogers’s life are recounted in the context of an old-style Ziegfeld Follies extravaganza, complete with massive old-school singing and dancing from a bevy of beautiful showgirls. It’s mostly lighthearted fun, but you get a clear sense of Will Rogers’s political point of view throughout, most notably his serious third-party credentials.

At one point, he is asked which political party he belongs to. “Oh, I don’t belong to any organized party,” he replies. “I’m a Democrat.” He also claims that Democratic conventions are much more fun than Republican ones, because the Democrats know they aren’t going anywhere afterwards. In real life, he stepped away from the Democrats in 1928 to run for president as the head of the Debunk Party, which actually carried the District of Columbia in the general election.  Rogers said he took that as a personal compliment, seeing as how the people in DC are the ones who have to live with whoever gets elected for the next four years.

The show turns serious right near the end, as Will Rogers goes on the radio to address the country in the wake of the Great Depression.  The dialogue in the show is a condensed version of a speech that’s come to be known as ““Bacons, Beans, and Limousines.” You can watch it for yourself here:

Watching the speech every night has been a delight, as David Lutken’s performance in the role of Will Rogers has been a joy from beginning to end. Having seen it multiple times, I have had ample opportunity to consider not just the performance but Will Rogers’s message, which has sparked an economic epiphany for me.

Specifically, I’ve decided that a major source of the world’s economic and political missteps come from the mistaken assumption that money and wealth are the same thing. That was an assumption that Will Rogers embraced, and the speech in the show contains couple of moments that demonstrate that he didn’t make any distinction between the two.

The first comes when Rogers, talking about how to relieve the suffering of the unemployed, insists that this shouldn’t be too difficult to do. “We’ve got the money,” he says. “There’s as much money in the country as there ever was, only fewer people have it.”

In a strict sense, that’s true, but it’s also irrelevant. There probably were just as many pieces of paper with pictures of dead presidents on them after the 1929 stock market crash as there were before it. But that same amount of money represented a smaller amount of wealth. When old people go on and on about how, in their day, it only cost a nickel to ride the bus, they’re ignoring the fact that a nickel back then reflected essentially the same amount of wealth as the two bucks it takes to ride the bus today. Probably more, in fact, given the technological improvements that have cut the real costs of public transportation. Money is a reflection of wealth, not the other way around.

When the stock market crashed, the money didn’t go anywhere, but a huge amount of wealth disappeared. (Actually, in strictly economic terms, that’s not entirely true, as the stock market was trading on an assumption that the country had more wealth than it actually had, and the crash was the free market making a ruthless correction to bring fantasy in line with reality. But that’s getting a little too far into the weeds on this.)  So while Will Rogers could stand up and say there was just as much money as there ever was, he couldn’t accurately go on the air and say there was just as much wealth in this country as there ever was, because there wasn’t.

If money and wealth were identical, the way out of the Depression would be for the government to write everyone a check for a million dollars. In fact, why doesn’t the government just write us all billion dollar checks and be done with it? We could all be rich! I get first dibs on the private jet with the cool flames on the sides.

But that doesn’t work, because giving everyone a bunch of money for no reason just makes everything cost more. When you increase the money supply without a commensurate increase in wealth, a billion dollars can’t buy you a private jet any more than today’s nickel can get you a bus ticket. You end up having to take wheelbarrows full of dollar bills to the grocery stores to buy one loaf of bread. That’s why governments that try to dig their way out of debt by printing up more money end up collapsing into crushing poverty that takes generations to overcome. If you doubt me, take a vacation in Venezuela and see how well printing money has solved all their problems.

The second part of Rogers’s speech that raised some economic red flags was when he started talking about how we get money. “A man can make a million dollars overnight and he’s on every front page in the morning,” he says. “But it never tells you who gave up that million that he got. You can’t get money without taking it from somebody else.”

This is the kind of zero-sum thinking that fuels President Trump’s rants against China. He’s always complaining about how much money we “lose” in trade with other countries, when neither country loses anything. When people pay money for something, they’re doing it to get something in return. When we give China a billion dollars, they give us a whole bunch of stuff, much of which we can resell at a higher profit than what we paid for it. In international trade, its usually the case that after money changes hands, both sides walk away wealthier.

Of course, a great deal of money spent on perishable goods that don’t appreciate in value, but even in those exchanges, both parties walk away satisfied, because nobody feels wealthier if they go to bed hungry when they refuse to buy food for dinner. Money, therefore, is usually offered as a reward for creating wealth, and those who “give up that million that he got” always gets something of value in return for their cash.

Those misunderstandings aside, Rogers is on to something when he talks about wealth disparity and the social responsibility we have to care for our neighbors. While the free market is very good at creating wealth, it’s entirely indifferent to the needs of those who, for whatever reason, are not able to create enough wealth to meet their needs. Good government is able to balance the need for a vibrant free market with concern for the poor. Such balances require active compromise and consensus, and they require input from all sides.

This is probably why Will Rogers’s maxim that he never met a man he didn’t like is so valuable in today’s political world. He’s not saying that he endorses everyone’s point of view; he’s saying that even people who do the wrong things are often doing it for the right reasons. Accepting the good faith of an ideological opponent is a great way to build a country, and a great way to live a life.

To sum up: Will Rogers had some economic misunderstandings, but overall, he was on to something. You’ll get a better sense of the if you come see my show. Get a ticket on the third row, and you can even sit next to me!

I’m now writing a lot more than I ever have, but not much of it is posted here. I’m sorry this blog is being neglected, but, since nobody pays me to write it, I’ve been forced to shift my focus to wordsmithing in ways that produce income.

That said, there’s a bunch of stuff I’ve written that I haven’t linked to anywhere, so I thought I could kill two birds with one stone by shamelessly plugging some of my stuff and reviving this moribund blog at the same time.

Here’s a piece I did on the National Endowment for the Arts that echoes an earlier blog post I wrote about my experience as a musical theatre panelist for the NEA.

Here’s one where I review the Netflix movie “The Most Hated Woman in America”, which I doubt anyone else but me has actually seen. I think Madalyn Murray O’Hair was a fascinating figure, despite the fact that I disagree with her profoundly.

It looks like Disney isn’t going to put Carrie Fisher into Episode IX at all, so this article about repurposed footage is probably irrelevant now. But here it is anyway.

I turned a Facebook status update game into a column! Behold the Jim Bennett Guide to Broadway Musicals.

This is NOT a review, but it is a nice little piece about my experience in The Will Rogers Follies.

Incidentally, every time I do a show for Pioneer Theatre Company, I feel a need to take a picture of myself in costume next to the portrait of my great-grandfather that hangs in the lobby of the theatre, like so: 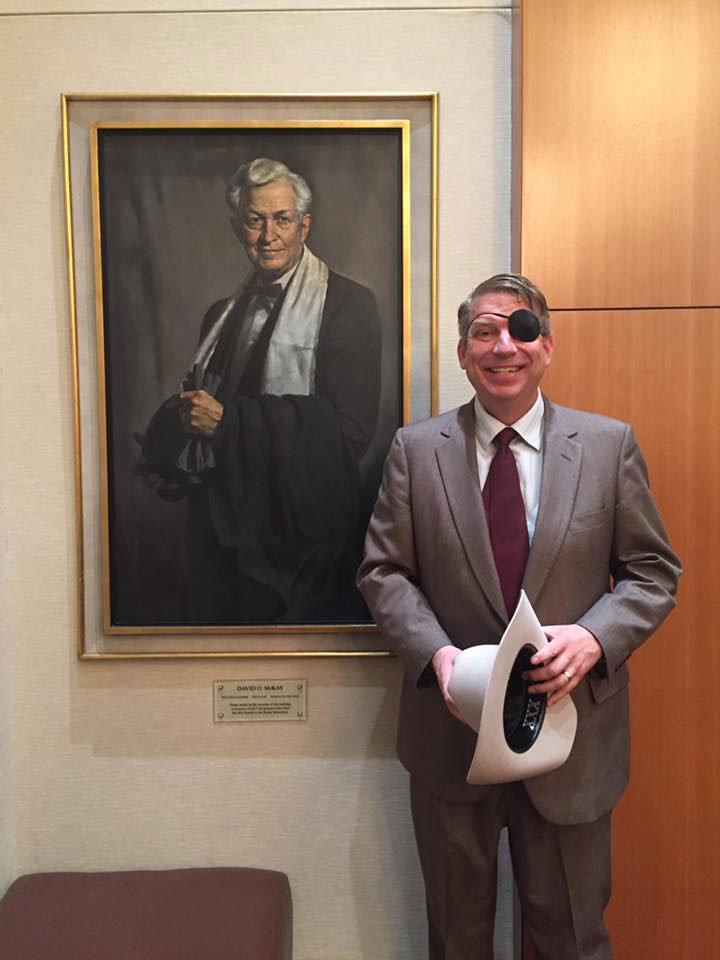 The eyepatch is cool but problematic, as I have to sit in the audience and watch the whole show without any depth perception.

The show is getting some great reviews, and I’m even mentioned in a couple of them.

Here’s the Deseret News review, which includes the following line:

Wiley Post, Rogers’ fellow aviator (played by Deseret News columnist Jim Bennett) delighted the audience as an agitator who would occasionally stand up and holler at Rogers.

Nice to get a mention, although I’m hardly an “agitator.” Pretty much all I say is “Let’s go flying, Will!” Glad to know that’s all it takes to “delight the audience.”

I’m mentioned in this review, too –

Wiley Post (Jim Bennet (sic)) has some of the funniest lines–but I grew to dislike him–the character, not the actor. If I tell you why, it’s a spoiler if you don’t read the Wikipedia link I added. Bennet (sic) has great timing and it was fun that he did his entire performance from a seat in the audience.

It’s nice to be disliked for the right reasons, so I won’t dislike the reviewer for spelling Bennett with only one T. And, really, I should be nice to her, because the reality is that I don’t have any funny lines at all. Unless, again, you think “Let’s go flying, Will!” is funny.

In this piece, I slam the new Alec Baldwin Match Game.

And in this piece, I praise Mystery Science Theatre 3000, because it’s awesome.

That’s all I’ve got. Come see me at Pioneer Theatre! Show runs until May 20. If you get a seat on the third row, you can even sit next to me.