I recently had a conversation with someone who had missed an LDS Woman’s Conference back in 1995, but she ended up at a reception later that evening with Marjorie Hinckley, wife of then-LDS Church President Gordon B. Hinckley.

“Did I miss anything at conference today?” she asked.

Yet that was the conference in which the Church presented the Proclamation on the Family, which has become near-canonized scripture and the bedrock of much of the opposition to greater acceptance of LGBT+ individuals in the Church. To hear many speak of it now, it’s the equivalent of the tablets Moses brought down from Sinai, but at the time, it wasn’t enough to merit a shrug of the shoulders from the prophet’s wife on the very day it was announced. 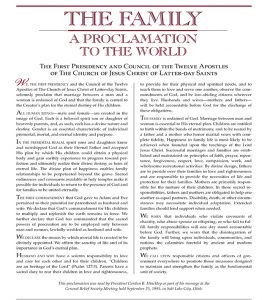 There is much consternation about whether or not the Proclamation should be treated as a revelation, and whether or not that distinction matters. In practical terms, the Proclamation was the product of lengthy discussion and committee processes, unlike the vast majority of the revelations recorded in the Doctrine and Covenants, which Joseph dictated as the came, often in front of others. He would occasionally edit them after the fact, but they were generally received in toto, which is quite different from how the Proclamation came to be.

That’s not to preclude the possibility of inspiration and spiritual guidance in the creation of the Proclamation, but rather to say that if you’re thinking it was delivered out of whole cloth from heaven in the same way that most of the canonized revelations were received, you’re incorrect. In his recent talk on the Proclamation, Elder Oaks – now President Oaks – described how he “went to work” to craft a document that would effectively state the Church’s position, and that it required lengthy revision and considerable effort.

“Subjects were identified and discussed by members of the Quorum of the Twelve for nearly a year,” he said. “Language was proposed, reviewed, and revised. Prayerfully we continually pleaded with the Lord for His inspiration on what we should say and how we should say it.”

That’s not the case, with, say, Section 76 of the Doctrine and Covenants, which is considerably longer, more intricate, and substantive than the Proclamation, yet it was written in a single sitting with no major revision afterward.

The issue of whether or not the Proclamation constitutes a revelation was the source of considerable controversy back in 2010, when President Boyd K. Packer gave a controversial talk where he insisted, contrary to the Church’s position, that nobody was born gay.

From Peggy Fletcher Stack at the Salt Lake Tribune:

Perhaps the most controversial paragraph in Packer’s text that he read Sunday said, “Some suppose that they were pre-set and cannot overcome what they feel are inborn tendencies toward the impure and unnatural. Not so! Why would our Heavenly Father do that to anyone? Remember he is our father.”

Now the word “temptations” has replaced “tendencies” and the question about God’s motives has been removed entirely.

But there was another revision to his talk, too. Again from the Tribune:

In his original talk, Packer said the church’s 1995 statement, “The Family: A Proclamation to the World,” “qualifies according to scriptural definition as a revelation.” That descriptive phrase has now been omitted, leaving the proclamation simply described as “a guide that members of the church would do well to read and to follow.”

Make of that what you will, but it’s pretty significant that the Church felt it important enough to correct the President of the Quorum of the Twelve on this subject. I think this incident suggests that it’s probably a mistake to say that the Proclamation is, indeed, a revelation on par with scripture.

But okay, fine. Whatever it is, it matters enough for Elder Oaks to say that it “has been the basis of Church teaching and practice for the last 22 years and will continue so for the future.” And as such, the Proclamation is constantly held up as an insurmountable obstacle against greater inclusion of LGBT+ individuals in the Church.

In reality, much of the opposition to LGBT+ issues attributed to the Proclamation comes largely by way of inference and is not actually present in the text of the document itself. Homosexuality, for instance, is not mentioned at all, nor is same-sex marriage. The Proclamation begins by announcing “that marriage between a man and a woman is ordained of God,” which is a statement that ought to be unobjectionable to everyone. At no point does it say marriage between two men or two women is condemned of God. Most people, including those who wrote the document, draw that conclusion, but the explicit condemnation is simply not there.

Gender identity does get a mention, as gender itself is described as “an essential characteristic of individual premortal, mortal, and eternal identity and purpose,” which is something gay individuals seldom dispute. A gay man, for instance, is still a man, and his gender is not in question. True, this phrase may pose problems for transgender people, although they could argue that they’re attempting to align with an eternal gender that is inconsistent with their biological one. In any case, a gay married couple is not likely to be confused about their gender, and the Proclamation’s reference to same presents no obstacle to acceptance of their union.

Perhaps the strongest language in the Proclamation that would condemn LGBT+ sexual expression is the sentence that declares that “God has commanded that the sacred powers of procreation are to be employed only between man and woman, lawfully wedded as husband and wife.” Except the euphemism employed here – “powers of procreation” – provides an interpretation that would not necessarily bar intimate relations between gay married couples.

Spencer W. Kimball once wrote that “[w]e know of no directive from the Lord that proper sexual experience between husbands and wives need be limited totally to the procreation of children.” In a gay marriage, procreation is biologically impossible. One could then credibly argue that gay or lesbian individuals who are intimate with their spouses are therefore not exercising “powers of procreation,” and that this phrase in the Proclamation simply warns against conceiving children out of wedlock.

There are several other phrases consistent with the ones above, such as: “Marriage between man and woman is essential to [God’s] eternal plan.” Yes, absolutely it is. Were same-sex marriage to replace or cancel out marriage between a man and a woman, that would be a serious problem. But that isn’t happening, nor is it going to happen. Surely celebrating and sustaining traditional marriage does not require condemnation of nontraditional marriages.

“Children are entitled to birth within the bonds of matrimony, and to be reared by a father and a mother who honor marital vows with complete fidelity.” Yes. This, as I’ve written many times before, is the one compelling secular argument against same-sex marriage – that, all things being equal, the best environment for raising children is with a married mother and a father. But all things are never equal, and the Proclamation allows for that reality when, after outlining the ideal, it then concedes that “[d]isability, death, or other circumstances may necessitate individual adaptation.”

What qualifies as “other circumstances?” Why can’t the non-hetero sexual orientation of the parents fit into that category?

Speaking of individual adaptation, I’ve spent the weekend on my Facebook newsfeed discussing the latest post from Josh Weed, who was the subject of one of my previous blog posts when, five years ago, he announced that he was a gay man happily married to a woman in what he described as “Club Unicorn,” a fantasy world where gay people can pretend to be straight and live happily ever after.

In a heartbreaking post, Josh Weed announces that he and his wife are divorcing, and that he has come to the conclusion that “unicorns don’t actually exist. The idea of our marriage as successful and healthy, we have finally realized, is just that: mythical. Impossible. Not real.”

I really think every Mormon ought to read his post. He was held up for so many years as the ideal of how to reconcile homosexuality with Mormonism that the reality of his struggle and the ultimate collapse of the “mixed orientation marriage” model needs to get as much attention as his initial announcement did.

He discusses the fact that he and his wife are trying to figure out an individual adaptation that would allow them both to participate in the raising of their children – they want to purchase a “homestead” that would allow them to live near each other on a large property that would also allow them each to find new partners. (Personally, I think that’s a very problematic solution, but that’s another discussion.) They both want to stay active in the Church and be present in their children’s lives, so more power to them as they try to adapt to imperfect, non-ideal circumstances.

The bottom line is that our fellowship with our LGBT+ members is woefully inadequate at present, and we ought to be looking for ways to be more inclusive. How we do that is another lengthy discussion, but we should stop hiding behind the Family Proclamation or using it as an excuse to ignore and cast aside our brothers and sisters in need.