Enough time has passed that I’ve allowed my “Last Jedi” experience to simmer and given me some added perspective on the whole thing. 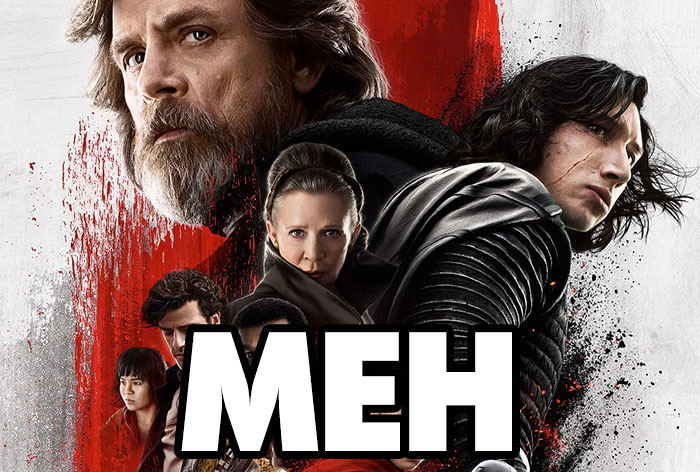 I’ve mentioned My Esteemed Colleague many times on this site, and given that he’s probably the biggest Star Wars geek I know, I texted him not long after I had seen the movie.

“Have you seen the Last Jedi yet?” I asked.

His reasoning was that Star Wars is the chronicle of Anakin Skywalker, and he didn’t want to ruin that story by polluting it with these new movies that essentially undo everything that happened up until “Return of the Jedi” by pulling a new Empire out of the ether and just hitting the reset button.

At the time, I thought his reaction was rather extreme, but as I’ve thought about it, I realized that I have absolutely no desire to Episode IX, and for similar reasons. What more is there to see? What mysteries await? None to speak of. Last Jedi has not only wiped away all progress made in the Original Trilogy; it has also wiped away any characters I care about. Han and Luke are dead, and Leia is going to die offscreen between movies, so all that’s left are these ciphers who have already demonstrated what their ultimate fate is going to be.

Is there any question as to who is going to prevail in the final confrontation between Rey and Kylo Ren? Is there anyone who gives a rip about what will happen to Poe or Finn? Are we really supposed to be invested in some weak love triangle between Rey, Finn, and Rose? Honestly, who cares?

Ironically, the final shot of “Last Jedi” is the appropriate way to end this particular story. A lonely kid in a horse stable wields the power of the Force as he looks to the stars in support of the Resistance. It’s a promise that Empire 2.0 won’t last, and that the grass roots efforts of billions will eventually triumph. Do we really need to see a “1-2-3-Kick” movie where that happens in entirely predictable ways?

But it’s not just that. It’s that what we actually did learn in Last Jedi didn’t defy expectations so much as spit on them.

What, you expected Rey’s parentage to be significant, mainly because of the multiple cues in “The Force Awakens” suggesting that it was? Well, ha ha on you – it isn’t. You thought it was necessary to explain how an ancient, heretofore unseen Sith Lord could have built a bigger, better Empire out of nowhere when he wasn’t even mentioned in the Original Trilogy, and when his existence was explicitly ruled out by the “Rule of Two” established in the prequels? Well, guess what, stupid – you’ll never know who Snoke was. Just shut up and watch our endless casino planet subplot that goes absolutely nowhere.

You get this sense right away the minute you see Luke toss the lightsaber over his shoulder. I laughed right along with everybody else, but it’s an almost spiteful gesture. Think of how much emphasis “The Force Awakens” put on that lightsaber. It fell into Maz’s hands and then called to Rey, triggering a vision that included Obi-Wan Kenobi saying “Rey, these are your first steps.” So the saber is kind of significant, no?

“Where did you get that?” Han asks.

“A story for another time,” Maz answers.

Except no. Ha ha! It’s a story that will never be told, and you’re a chump for thinking it matters. It goes over the shoulder along with everything else.

Rian Johnson and his defenders act as if the dismissal of these story threads is some kind of act of genius, which piles insult on injury. It’s cruel to yank an audience around like that, and it’s not surprising that so many audience members weren’t willing to applaud their own abuse.

Including me. I’m not going to vow not to see Episode IX, but I’m not making any real effort to see it. At the very least, don’t expect me to be first in line on opening weekend.

The Road Not Taken: Poetry's Greatest Prank
The Proclamation on the Family: A Closer Look