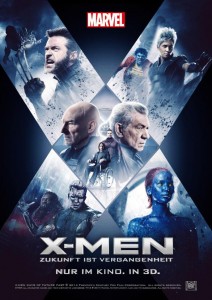 So I saw “X-Men: Days of Future Past” with my twin boys last night.

We had a good time. It was a good movie, probably the best of the X-films, with the possible exception of “First Class.” If you like this sort of thing, rest assured you will enjoy yourself during the watching process.

I am not particularly interested in reviewing it. It’s good. Quicksilver’s ten minutes are some of the best superhero moments ever filmed. Go see it. I will not stand in your way. I will, however, spoil the plot details for you from here on out if you have not seen it. (So, you know, spoiler warning, abandon all hope, yada yada yada.)

One of the big selling points of this movie has been that it’s designed to clean up the continuity messes made over the course of the X-film series. And according to every review I’ve read, it has succeeded brilliantly in doing so.

Well, I am here to tell you, unequivocally, that it hasn’t. If anything, it has made the problems far worse.

By the end of this new movie, none of that actually happened. Isn’t that great? DOFP washes away all the X3 stink. Except the consequences of the X3 events ought to have been adequately addressed by the DOFP plot, and, for the most part, they’re ignored completely.

Let’s begin with the good professor, shall we? In X3, his body is completely obliterated by Jean Grey’s telekinesis, and they have a funeral for him and everything. Yet he pops up in the post-credits stinger of last year’s “The Wolverine” movie alive and well. That didn’t bother me, as I presumed they’d explain his miraculous rise from the dead in “Days of Future Past.”

Nope. They didn’t even mention it.

And before you get all geek-huffy on me, I recognize that there was a post-credits resurrection moment for Dr. X at the end of X3. We’re therefore supposed to assume that this was how he came back, and there’s no need to waste any screen time in explaining it further.

But for pity’s sake, doesn’t anybody remember how he came back?

There’s a scene in X3 where Charles Xavier is teaching a class on mutant ethics. He cites as a case study the healthy body of a man with no consciousness. If a mutant had the power to inject his consciousness into this brain-dead body, would that be an ethically acceptable thing to do? Before he can get an answer, however, the demands of the plot interrupt him, and the issue is never raised again – until the very, very end, when the woman monitoring the brain-dead dude hears him speak with Patrick Stewart’s voice. So Xavier has leapfrogged all ethical obstacles and transferred his mental hard drive into all-new hardware.  Presto! Our hero has returned!

Yeah, that’s swell. Except nobody seems to notice that our hero has returned in someone else’s body. Why, then, does he still look like Patrick Stewart?!

In Googling this, I came across an explanation from X3 director Brett Ratner, who apparently said in the DVD commentary that this body belonged to Professor X’s identical twin. Um, ok. That’s ridiculously lazy writing, as there’s never been any reference to Xavier having a twin brother who has been a vegetable on life support for six decades or so, but fine, that’s probably the best you can do.

So why does this convenient, out-of-nowhere spare body donor on reserve in case of Xavier’s death also have a spinal cord injury? Shouldn’t Patrick Stewart’s Professor X be up and walking now that he’s traded in his old fleshware for the new? Nope. he’s still tooling around in his really cool wheelchair. Why? Well, because. Stop asking questions.

As for Magneto, his return to form didn’t bother me as much in light of the last pre-credits shot of X3 when he barely moves a metal chess piece without touching it. But that’s a far cry from the kind of magnetic firepower he wields in the third movie. But OK, the future part of the third movie takes place decades after X3, so his powers could have come back over time. But what about the post-credits scene in “The Wolverine?” Magneto’s back in full force there, and that movie shows Wolverine dealing with the aftermath of the third film as if it happened relatively recently. So the X3 mutant “cure” wore off pretty quickly, didn’t it? Doesn’t that entirely negate the entire premise of the third film?

DOFP did nothing to resolve the myriad of  continuity issues with that Xavier/Magneto/Logan moment in the second solo Wolverine movie. There are so many crammed into such a short span of time that they simply stagger the imagination. Rewatch it, and then come back to me.

There, as Wolverine walks through airport security, he sees TV ads for Trask Industries that suggest they’re just starting to roll out the Sentinels that make life for all mutants hell on earth. These ads are being broadcast circa 2013.

But in “Days of Future Past,” the Sentinels are rolled out by Richard Nixon way back in 1973. You can say that this whole process was sped up by the events in DOFP, but at the beginning of the new movie, they announce that Mystique’s murder of Bolivar Trask at the Paris Peace Accords sets the Sentinel Project in motion in the timeline of the original X-films. Yet in that timeline, the first mention of the Sentinels project isn’t until 2013! What accounts for the four-decade discrepancy here, other than extreme sloppiness?

All right, maybe if you have really strong belief suspension skills, you can assume that Trask Industries has been building Sentinels all along, and nobody’s ever bothered to bring it to our attention. But even if the audience didn’t know that, surely Wolverine would have. Yet when he’s approached by Professor X and Magneto at the airport, they warn him of the grave threat that threatens to destroy all mutants, and it’s the first time he’s heard about it. Magneto even says that there are “dark forces building [present tense] a weapon that could be the end of our kind.” So the idea that the Sentinels have been coming off the assembly line since the Watergate years pretty much falls apart.

There are so many more problems, and I’m already over a thousand words. More tomorrow.

Talking of Tenets
Dark Thoughts from a Calabasas Kid