It seems I have slandered Davey Jones, Mike Nesmith, Peter Tork, and Mickey Dolenz. Time to set the record straight.

I wrote a column for the Deseret News entitled “Hey Miley Cyrus, what’s wrong with being wholesome?” The point of the column was that artists who think they’ll be taken seriously by being sleazier usually fall flat on their faces. I cited several examples, including George Michael, Julie Andrews, and, yes, the Pre-Fab Four, AKA The Monkees.

I later recieved a thoughtful email from one Bret Wheadon, the Webmaster of Monkees – The Complete Guide that set me straight.

Here’s what he wrote:

Hi, I enjoy your columns, and generally agree with them wholeheartedly – but one paragraph in your column: “Hey Miley Cyrus, what’s wrong with being wholesome?” caught my eye. You wrote:

If Miley doesn’t want to learn from George Michael, then she ought to pay attention to the object lesson provided by the Monkees, the screwball quartet that took the nation by storm with a goofy-yet-clean sitcom, which they followed up with a filthy, incoherent feature film called “Head” that froze the Monkees’ collective career for a couple of decades. When they came to their senses and embraced all things wholesome again, they achieved new success by reconnecting with the audience they’d alienated.

From that paragraph, I’m betting dollars to doughnuts that you have never seen the movie HEAD that you vilify here. I’ve seen it – and there’s nothing “filthy” about it – there’s no nudity, bad language, violence or gore. Yes, it’s at times incoherent, in a mild psychedelic way, which was a deliberate effort by the Monkees to deconstruct the samey-same scripted act they were known for. But it is rated “G” and watching it today – it totally deserves that rating (unlike something like the original “Planet of the Apes” which is definitely NOT rated G entertainment.

It’s a musical psychedelic comedy where comedy sketches begin, but then fall apart as the Monkees decide they’ve lost interest. And the “head” of the title is Victor Mature’s giant head where the Monkees play dandruff.

Here’s what I wrote back:

You got me, sir. I have seen excerpts, and I actually had a class with Charles Macaulay at USC, who was in the film, and he dismissed it as a “drug-frenzied nightmare,” so I was going by reputation. I’ll put a correction up on my blog.

Thanks for writing to me!

Longtime readers of this blog will recognize Mr. Macaulay as Landru from the original Star Trek TV series. 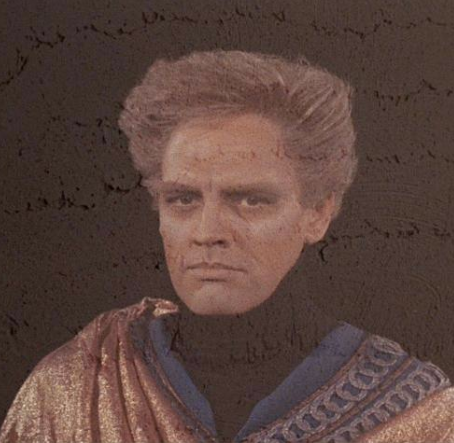 Mr. Wheadon wrote back and said the following:

Well, and let me backpedal (a bit) I seem to remember one clip which features a famous black and white film clip of the execution of a (Vietnamese?) citizen – all while Davy Jones is doing a softshoe in white tie and tails… more of a bizarre social commentary than anything else.

You won’t find that in a Disney movie!

So there it is. Just wanted to correct the record.