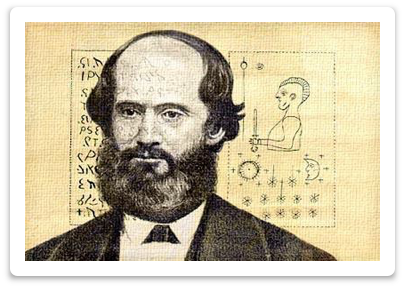 This should be good for a laugh.

James Strang and his claims are absolutely fascinating.

If you’re fascinated by pale imitations and weak retreads.

He was basically Joseph Smith 2.0 – but with a twist.

And the twist is – Strang’s church went nowhere and now has less than 300 followers.

And unlike Joseph, Strang had no other witnesses to this angel or to any of his revelations.

And unlike Joseph, nobody else ever saw his Urim and/or Thummim.

And unlike Joseph, there was nothing remotely supernatural about the experience. 11 people watched Strang dig up eighteen paper-sized plates that had likely been buried there by Strang the night before.

And unlike Joseph, who translated a 265,000-word, complex, internally consistent 1,000-year history in sixty days despite being functionally illiterate, the well-educated Strang took a decade to produce a book about a fifth as long with no coherent narrative.

– Established a new Church:   The Church of Jesus Christ of Latter Day Saints (Strangite).   Its headquarters is still in Voree, Wisconsin.

And unlike Joseph, Strang’s church dwindled to the point where it had “had around three hundred members in 1998.”

Be it known unto all nations, kindreds, tongues and people, to whom this Book of the Law of the Lord shall come, that James J. Strang has the plates of the ancient Book of the Law of the Lord given to Moses, from which he translated this law, and has shown them to us. We examined them with our eyes, and handled them with our hands. The engravings are beautiful antique workmanship, bearing a striking resemblance to the ancient oriental languages; and those from which the laws in this book were translated are eighteen in number, about seven inches and  three-eights wide, by nine inches long, occasionally embellished with beautiful pictures.

And we testify unto you all that the everlasting kingdom of God is established, in which this law shall be kept, till it brings in rest and everlasting righteousness to all the faithful.

And unlike Joseph, none of these witnesses report any supernatural or even spiritual experience or event. These plates were on public display until the turn of the century – plenty of other people saw them, too. They were not in any identifiable language, and they rival the Kinderhook plates for evidence of authenticity, or lack thereof.

In addition to the above 7 witnesses, there were 4 witnesses who went with Strang as they unearthed the Voree Plates:

TESTIMONY OF WITNESSES TO THE VOREE PLATES

1. On the thirteenth day of September, 1845, we, Aaron Smith, Jirah B. Wheelan, James M. Van Nostrand, and Edward Whitcomb, assembled at the call of James J. Strang, who is by us and many others approved as a Prophet and Seer of God. He proceeded to inform us that it had been revealed to him in a vision that an account of an ancient people was buried in a hill south of White River bridge, near the east line of Walworth County; and leading us to an oak tree about one foot in diameter, told us that we would find it enclosed in a case of rude earthen ware under that tree at  the depth of about three feet; requested us to dig it up, and charged us to so  examine the ground that we should know we were not imposed upon, and that it   had not been buried there since the tree grew. The tree was surrounded by a sward of deeply rooted grass, such as is usually found in the openings, and upon the most critical examination we could not discover any indication that it had ever been cut through or disturbed.

2. We then dug up the tree, and continued to dig to the depth of about three feet, where we found a case of slightly baked clay containing three plates of brass. On one side of one is a landscape view of the south end of Gardner’s prairie and the range of hills where they were dug. On another is a man with a crown on his head and a scepter in his hand, above is an eye before an upright line, below the sun and moon surrounded with twelve stars, at the bottom are twelve large stars from three of which pillars arise, and closely interspersed with them are seventy very small stars. The other four sides are very closely covered with what appear to be alphabetic characters, but in a language of which we have no knowledge.

3. The case was found imbedded in indurated clay so closely fitting it that it broke in taking out, and the earth below the soil was so hard as to be dug with difficulty even with a pickax. Over the case was found a flat stone about one foot wide each way and three inches thick, which appeared to have undergone the action of fire, and fell in pieces after a few minutes exposure to the air. The digging extended in the clay about eighteen inches, there being two kinds of earth of different color and appearance  above  it.

4. We examined as we dug all the way with the utmost care, and we say, with utmost confidence, that no part of the earth through which we dug exhibited any sign or indication that it had been moved or disturbed at any time previous. The roots of the tree stuck down on every side very closely, extending below the case, and closely interwoven with roots from other trees. None of them had been broken or cut away. No clay is found in the country like that of which the case is made.

5. In fine, we found an alphabetic and pictorial record, carefully cased up, buried deep in the earth, covered with a flat stone, with an oak tree one foot in diameter growing over it, with every evidence that the sense can give that it has lain there as long as that tree has been growing. Strang took no part in the digging, but kept entirely away from before the first blow was struck till after the plates were taken out of the case; and the sole inducement to our digging was our faith in his statement as a Prophet of the Lord that a record would thus and there be found.

And, again, unlike Joseph, there’s nothing supernatural or even spiritual in this testimony. There’s also absolutely no reason to doubt it or renounce it. I’m pretty sure these guys actually did dig up the plates Strang had buried the night before. 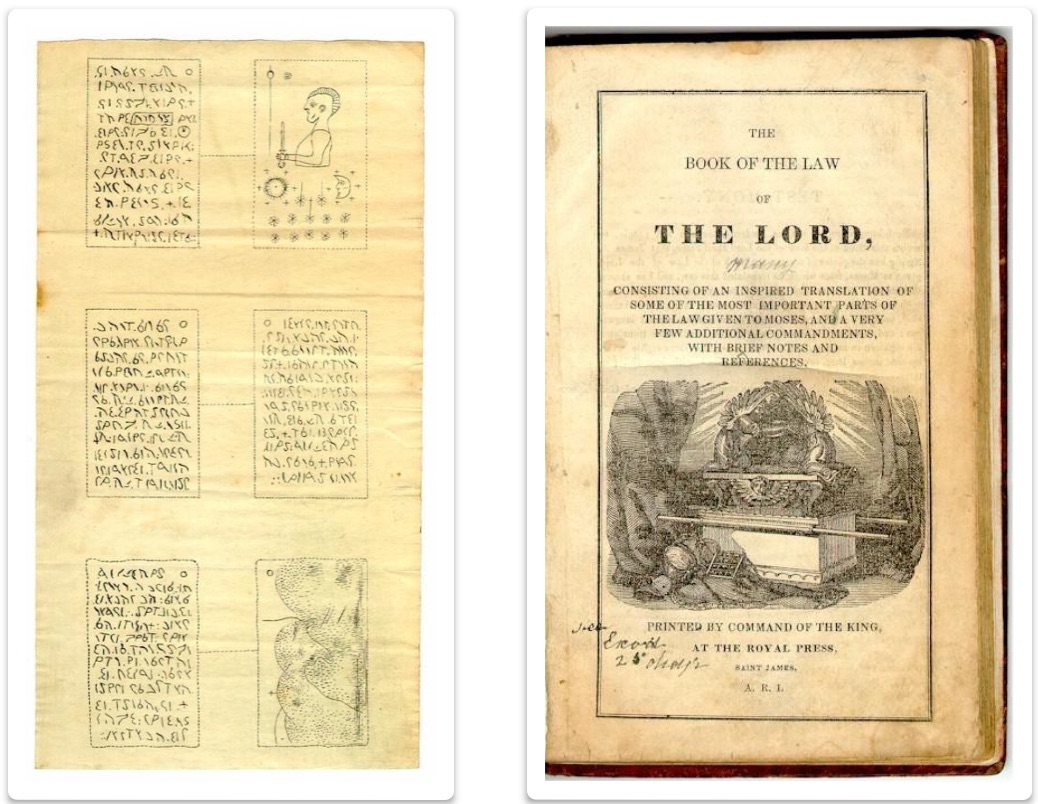 And there they are. Very cool. Now you’re a witness, too!

Like Joseph, Strang had a scribe (Samuel Graham) who wrote as Strang translated.

And unlike Joseph, Strang, who was well-educated, didn’t actually need one. His use of a scribe was just one more way to imitate Joseph.

Along with several of the witnesses, Graham was later excommunicated from Strang’s Church. There is no direct evidence that any of the above 11 Strang witnesses ever denied their testimony of James Strang, the Voree Plates, Strang’s church or Strang’s divine calling.

I added some emphasis there to highlight your hypocrisy on this point. Because every piece of hearsay that could possibly prove embarrassing to Martin Harris is cited by you as unimpeachable gospel even if it comes from conversations that took place decades after the fact and after Harris was dead, but the contemporaneous hearsay that had two of the witnesses denouncing Strang as a fraud and one of them admitting he helped Strang forge the plates is only indirect evidence, so you can conveniently ignore it.

The hearsay in question, as quoted by from the infallible Wikipedia:

Some have insisted that the Voree plates were forged by Strang. Isaac Scott, an ex-Strangite, claimed that Caleb Barnes, Strang’s former law partner, said that he and Strang had fabricated them from a tea kettle belonging to Strang’s father-in-law, as part of a land speculation scheme they had hatched.[13]

According to Scott, Barnes and Strang “made the ‘plates’ out of Ben [Perce]’s old kettle and engraved them with an old saw file, and … when completed they put acid on them to corrode them and give them an ancient appearance; and that to deposit them under the tree, where they were found, they took a large auger … which Ben [Perce] owned, put a fork handle on the auger and with it bored a long slanting hole under a tree on ‘The Hill of Promise,’ as they called it, laying the earth in a trail on a cloth as taken out, then put the ‘plates’ in, tamping in all the earth again, leaving no trace of their work visible.”[13]

As for denying this testimony, what’s to deny? They dug up the homemade plates that Strang had buried the night before. I have no reason to doubt it, because it’s a mundane, everyday sort of event. Similarly, when I was twelve years old, someone put a dead fish in my tent at Boy Scout camp. I’ve never denied my testimony of that event, and I never will.

Every single living Book of Mormon witness besides Oliver Cowdery accepted Strang’s prophetic claim of being Joseph’s true successor and joined him and his church.

Which is very peculiar if they actually knew Joseph Smith was fraud. Why seek out a successor to a bogus prophet after the bogus prophet dies? Their interest in perpetuating the cause of the Book of Mormon demonstrates that their belief in it was wholly sincere.

Also, it’s not true. Only two of the Eight Witnesses followed Strang – Hiram Page and John Whitmer. In any case, they were all quickly disillusioned and abandoned Strang completely.

And then walked away after they realized he wasn’t what he claimed to be.

What does this say about the credibility of the Book of Mormon witnesses if they were so easily duped by James Strang and his claims of being a prophet called of God to bring forth new scripture from ancient plates only to later turn out to be a fraud?

It says they still believed in Joseph’s prophetic mission and the veracity of the Book of Mormon and were eager to find the appropriate spiritual home for their testimony, and that, after making the mistake of thinking that Strang could provide that home, quickly corrected course.

Tomorrow: Where are the signatures?