In an attempt to influence and abate public rumors of his secret polygamy, Joseph got 31 witnesses to sign an affidavit published in the LDS October 1, 1842 Times and Seasons stating that Joseph did not practice polygamy.  Pointing to the above-mentioned D&C 101:4 scripture, these witnesses claimed the following:

“…we know of no other rule or system of marriage than the one published in the Book of Doctrine and Covenants.”

Nope. Quote the rest of it, please.

We the undersigned members of the church of Jesus Christ of Latter-Day Saints and residents of the city of Nauvoo, persons of families do hereby certify and declare that we know of no other rule or system of marriage than the one published from the Book of Doctrine and Covenants, and we give this certificate to show that Dr. J. C. Bennett’s “secret wife system” is a creature of his own make as we know of no such society in this place not never did. [Emphasis added]

This was not, in fact, an affidavit “stating that Joseph did not practice polygamy.” It is an affidavit disavowing “Dr. J.C. Bennett’s ‘secret wife system,” i.e. the “spiritual wifeism” I described earlier, which was a flimsy pretext for adultery and antithetical to the principle of plural marriage as practiced by Joseph.

The problem with this affidavit is that it was signed by several people who were secret polygamists or who knew that Joseph was a polygamist at the time they signed the affidavit. In fact, Eliza R. Snow, one of the signers of this affidavit, was Joseph Smith’s plural wife.

She was also, if some sources to be believed, on the receiving end of John C. Bennett’s predatory “spiritual wife” advances. She would have every legitimate reason to come out in full force of Dr. Bennett’s gross distortion of the principle of plural marriage.

In addition, the fact that 31 witnesses could make this statement with a clear conscience undermines your implication that they saw a conflict between the predatory seduction they were denouncing and the principle of plural marriage they were practicing.

Joseph and Eliza were married 3 months earlier on June 29, 1842. Two Apostles and future prophets, John Taylor and Wilford Woodruff, were very aware of Joseph’s polygamy behind the scenes when they signed. Another signer, Bishop Whitney, had personally married his daughter Sarah Ann Whitney to Joseph as a plural wife a few months earlier on July 27, 1842; Whitney’s wife and Sarah’s mother Elizabeth  (also a signer) witnessed the ceremony.

So if this was such a blatant lie, why did no one object? Are we to assume that all of these people were as blithely dishonest as you suggest Joseph Smith was? The far more plausible explanation the idea that this affidavit was denouncing a practice that they believed was wholly inconsistent with the doctrine they were then living.

What does it say about Joseph Smith and his character to include his plural wife and buddies – who knew about his secret polygamy/polyandry – to lie and perjure in a sworn public affidavit that Joseph was not a polygamist?

It says that you have unwittingly misinterpreted this affidavit as perjury when it was not.

Now, does the fact that Joseph Smith practiced polygamy and polyandry while lying to Emma, the Saints, and the world about it over the course of 10+ years prove that he was a false prophet?  That the Church is false?  No, it doesn’t.

Well, that’s mighty big of you, but it’s also a distortion of reality. Joseph practiced no polyandry – sealings, no marriage, no sex. You really have no idea what he told Emma. No question he was less than fully honest in discussing the practice with the world, but the fact that he still attempted to reconcile honesty with concern for the safety of the Saints speaks well of him.

Also, 10+ years is really stretching it. He was first married to a plural wife in late 1835/early 1836, and he was dead by 1844, so nine years is the best you can do. Given that almost all of Joseph’s practice of the doctrine took place in the two-and-a-half years of his life, that’s an unsustainable accusation.

What it does prove, however, is that Joseph Smith’s pattern of behavior or modus operandi for a period of at least 10 years of his adult life was to keep secrets, be deceptive, and be dishonest – both privately and publicly.

Is a bishop or stake president who refuses to discuss the private confession of an adulterer in public being secretive, deceptive, and dishonest? If you ask a bishop directly if Brother So-and-So had an affair, would he be wrong to try and find some way to deflect the question to protect the sanctity of the confidentiality to which he is bound? Should we applaud a bishop who blabs about such private matters because that bishop is being honest?

This is a line I have had to walk in my own family. Having been involved as a bishopric member in administering disciplinary councils, I learned things about my fellow ward members about which I cannot speak or even hint to own wife. When such things come up in passing, I try not to be dishonest, but I definitely do everything I can to skirt the subject. Does this make me a liar? By your definition, yes. From my perspective, I’m trying to balance the value of honesty with the value of protecting those who trust me to keep things confidential.

Just as I do not deny that polygamy is strange and even troubling, I think it is impossible for any remotely objective observer to deny that Joseph believed it to be the will of God, and that he practiced plural marriage as a religious principle, not as a vehicle for sexual predation. As such, he felt duty bound to keep such matters confidential in the same spirit that church leaders today do not publicize the confessional discussions they have with church members.

It’s when you take this snapshot of Joseph’s character and start looking into the Book of Abraham, the Kinderhook Plates, the Book of Mormon, the multiple First Vision accounts, Priesthood restoration, and so on that you start to see a very disturbing pattern and picture.

When you apply a single lens colored with a blanket assumption of dishonesty, then of course every pattern is disturbing. You’re like the citizens of the Emerald City who wear green glasses so that everything looks green. (That doesn’t happen in the movie, but it’s in the book.)

You’ve been unable to objectively demonstrate dishonesty in the coming forth of the Book of Mormon, the Book of Abraham, or the multiple – and consistent – First Vision accounts. All you’ve been able to do is show your own assumption of dishonesty in instances that are often based on your own misunderstandings and not the facts.

Do you really think this approach is exclusive to Joseph Smith?

If you assume from the outset that Martin Luther King or Gandhi were fundamentally dishonest (they both had extramarital affairs about which they lied), or that George Washington was inherently wicked (he owned other human beings), or that Barack Obama is a bloodthirsty killer (he ordered the murder of Osama bin Laden), then every perception of these largely decent and upstanding men is tainted, and they can do nothing right.

What’s truly disturbing to me is that every time it’s possible to give Joseph the benefit of the doubt, you choose not to grant it to him. In fact, you choose to interpret all of his actions in as harsh a light as possible. I think it would be wise to readjust your snapshot. 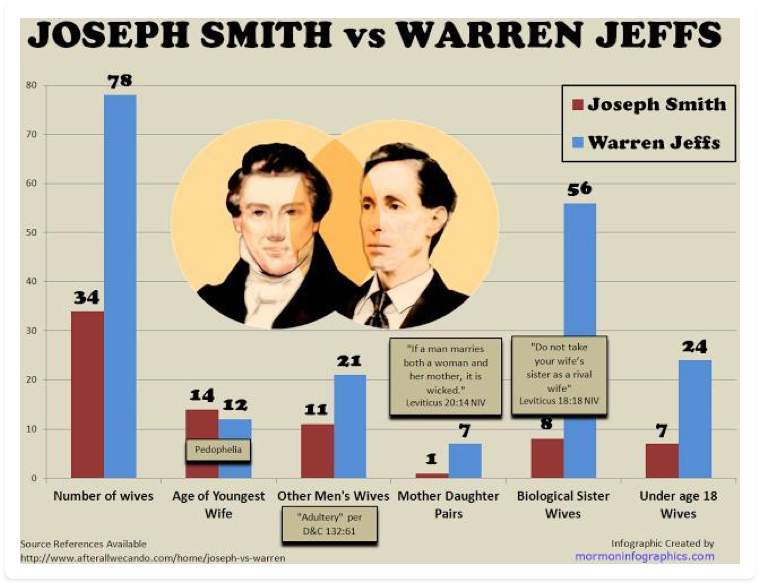 Warren Jeffs is more closely aligned to Joseph Smith Mormonism than the LDS Church is.

Sorry to be crude, but this is like saying rape and marital intimacy are essentially the same thing.

How many of Warren Jeffs’ relationships were sealings, not marriages, with no sex? As repeatedly mentioned above, Joseph had no sexual relations with underage girls and was therefore no pedophile, and he had sealings/no marriage/no sex with any other men’s wives and was not an adulterer. The only new accusation in here is that Joseph, by marrying women who were related to each other, was in violation of the Law of Moses, a law fulfilled by the coming of Christ that we are no longer commanded to live. I’m not sure, but I’m willing to bet Joseph ate shellfish on occasion, too, which, under the Mosaic law, constitutes “an abomination.” (Leviticus 11:12.) One more thing you can use to pile on, Jeremy.

But enough of my yakkin’. What else do the unreliable and inflammatory folks at Mormoninfographics.com have to say? 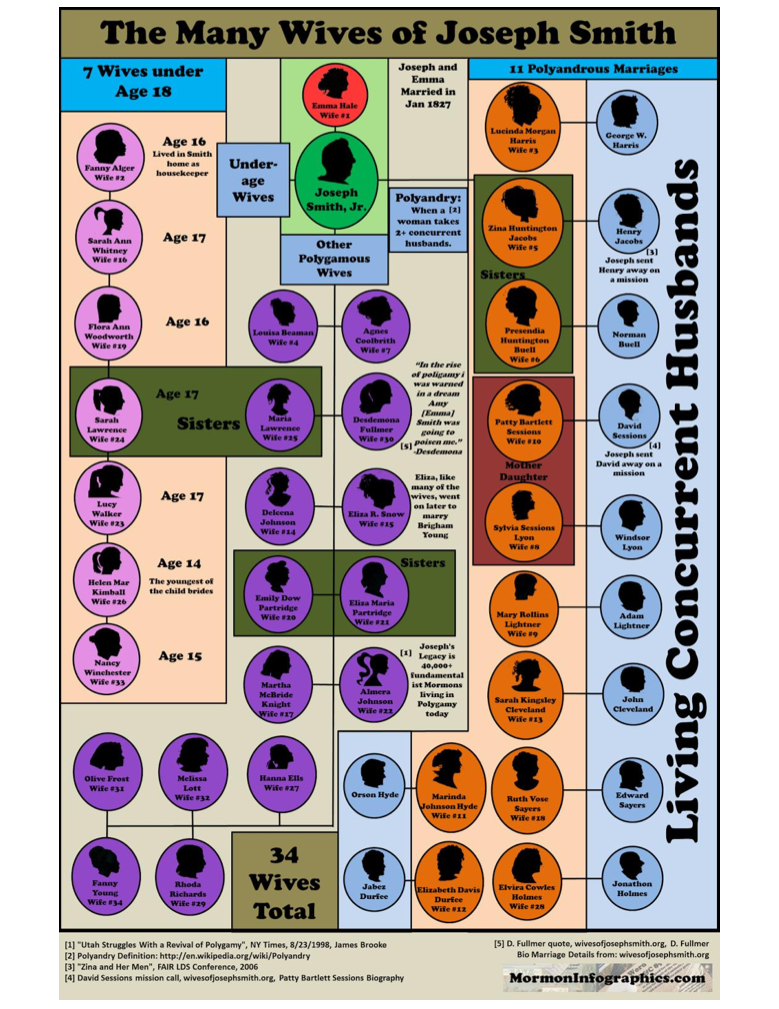 Again, we’re just retreading all the same ground here – so many of these are not sexual relationships and not even marriages, and simply repeating the same accusations graphically is kind of tedious, albeit a bit more colorful. Saying the same thing over and over doesn’t make it more true.

Interesting, however, that the graphic identifies Fanny Alger as a “housekeeper” and not a “foster daughter,” which is how you erroneously described here earlier. I do concede, however, that the (irrelevant) dream about Emma Smith poisoning Desdemona Fullmer is a nice touch if your goal is to think as poorly of Joseph Smith as is possible, which seems to be the purpose here. Context suggests that the recounting of the dream, which Fullmer recounted in 1868 when the Utah church was deeply suspicious of Emma, was more of an attempt to smear the RLDS folks than indict Joseph. Perhaps we should forgive her for such a slight, as Fullmer remained faithful throughout her life.