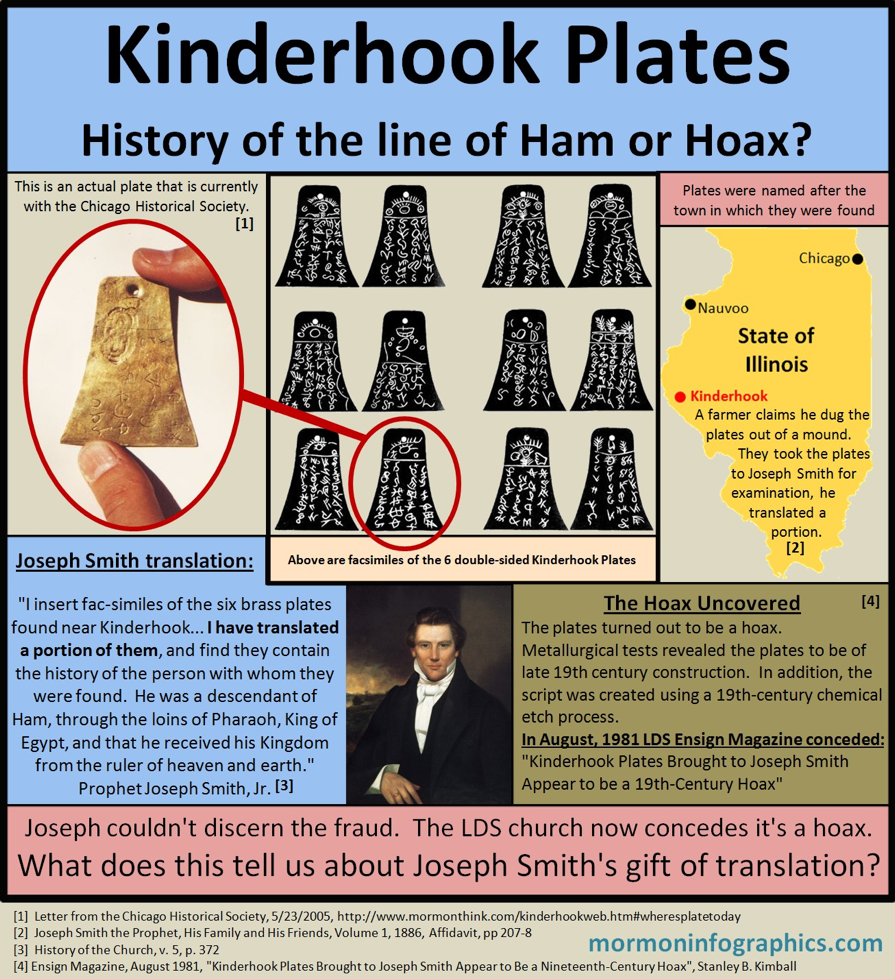 What’s with all the MormonInfographics cribbing? Do you owe those guys money?

What we do know is that when Joseph received the plates, he compared one character to a character on the Kirtland Egyptian Papers and found what appeared to be a match. So perhaps Clayton was accurate in saying he had “translated a portion of them” – i.e. a single character. One of the plates has a thingee that looks similar to a Ham-referencing boat-shaped symbol in the Kirtland Egyptian Papers. That was it. Nothing supernatural took place. My guess is that after that single moment of excitement, Joseph quickly realized someone was pulling his leg and just moved on to other things.

Best detailed summation of all things Kinderhook can be found online here.

As outlined in the “Book of Abraham” section, Joseph Smith got everything wrong about the papyri, the facsimiles, the names, the gods, the scene context, the fact that the papyri and facsimiles were 1st  century CE funerary text, who was male, who was female, etc.  It’s gibberish.

You’re just repeating yourself here. My prior response still stands.

I clicked on your link and got pages and pages of stuff like this:

In any case, we’ve been over this. Non-LDS Egyptologists generally don’t pay attention to the Book of Abraham, and there are startling parallels between the book and ancient Abrahamic traditions.

Joseph Smith made a claim that he could translate ancient documents.  This is a testable claim.

Not if you don’t have the original documents to compare to the translation.

Joseph failed the test with the Book of Abraham.

Only if you assume that the scraps we have are the actual source material, which they aren’t.

He failed the test with the Kinderhook Plates.

He did? Do you know of a translation of the Kinderhook Plates that everyone else has missed? Since he didn’t translate the fake plates, how could this matter have any bearing on his abilities as a translator?

With this modus operandi and track record, I’m now supposed to believe that Joseph has the credibility of translating the keystone Book of Mormon?

Except the Book of Mormon came first and established the M.O. It’s a complex and internally consistent document that stands on its own merits. Certainly you have not offered a coherent alternative explanation for its existence. Now you’re trying to fallaciously discredit it based on the false premise that we have the source material for the Book of Abraham. You’re also falsely claiming that Joseph translated false plates that he didn’t translate.

With a rock in a hat?

Sure. Why not? How is a rock in a hat inherently weirder than ancient biblical granny glasses tied to a metal breastplate? Just saying “rock in a hat” doesn’t do anything to discredit the Book of Mormon – it’s still here, and making fun of it doesn’t make it go away.

That the gold plates that ancient prophets went through all the time and effort of making, engraving, compiling, abridging, preserving, hiding, and transporting were useless?

Who says they were useless? They were extraordinarily useful. They provided tangible evidence of the Book of Mormon’s divine origins, and they were viewed by multiple witnesses, including many not mentioned in the official Three and Eight Witness testimonies. They also provide a stumbling block for critics who want to pretend Joseph made it all up have to account for the overwhelming physical evidence that Joseph actually had some kind of plates. (Hence the theories of forged tin plates, etc.) The plates tangibly tied the Book of Mormon to the ancient world. Very useful indeed, in my opinion.

Moroni’s 5,000 mile journey lugging the gold plates from Mesoamerica (if you believe the unofficial apologists) all the way to New York to bury the plates, come back as a resurrected angel, and instruct Joseph for 4 years only for Joseph to translate instead using just a…rock in a hat?

So we keep coming back to the hat rock. What have you got against rocks in hats?

I wonder what process would have been sufficient to impress you. You sound like Naaman in the Old Testament. He got ticked off because the prophet told him to bathe seven times in the Jordan River to cure his leprosy. He wanted some far grander process, or at least a better river. If the rock hadn’t been in the hat, would that have been better? Maybe if Moroni had stuck around personally to dictate to Oliver?

The rock in the hat is culturally odd to Jeremy Runnells and Jim Bennett and 21st Century folks, but it wasn’t culturally odd to Joseph Smith, and since he was the one doing the translating, I don’t see any problem with the Lord communicating with him by means of methods that would have been familiar to Joseph, even if they are strange to us.

A rock he found digging in his neighbor’s property in 1822; a year before Moroni appeared in his bedroom, 5 years before he got the gold plates and Urim and Thummim, and the same stone and method Joseph used for his treasure hunting activities?

That’s the one! It probably put his mind at ease to be able to have familiar frame of reference to help him relate to the overwhelming task of transitioning from “a boy of no consequence in the world” to a prophet, seer, and revelator. 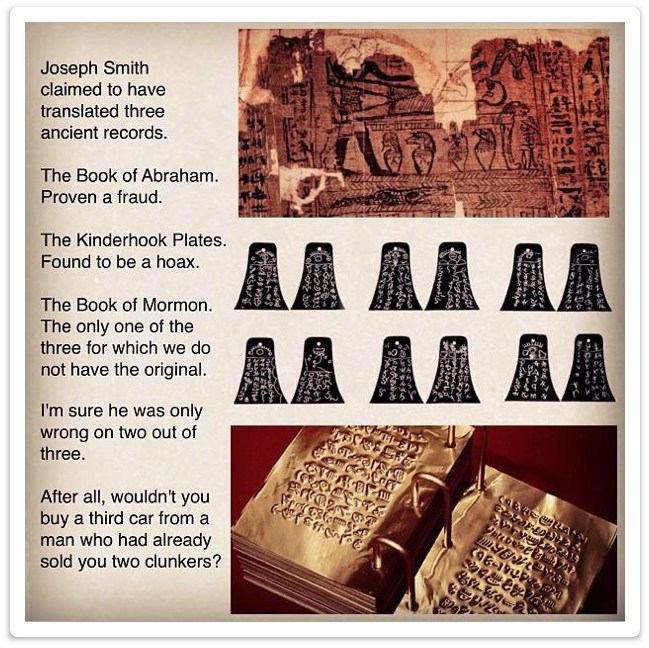 Again, Joseph Smith never translated the Kinderhook Plates or claimed that he had. That leaves us with two, not three, ancient records, and we do not have the original text for the Book of Abraham, so it has not been proven a fraud. Also, it’s weird to call the Book of Mormon the third “clunker” when it’s the one that came first.