Allow me to quote from my very first post on this blog, On Being Stallion Cornell:

I was a theatre major at USC, and, as such, it was my duty to dig up a string of monologues for class assignments, and, invariably, the same monologues kept being recycled, and I can only take so much Christopher Durang. So I started writing my own and, to be sure that I was being judged on my acting and not my writing, I attributed them to a fictional author, the good Mr. Cornell.

These monologues got goofier and goofier, and they usually involved bizarre situations with really loud people. The first of these, which included all manner of shrieking punctuated by the phrase “I’d offer you a biscuit first, but I don’t like you very much,” still remains my favorite, although the one where a guy rips out his own heart and smothers it in mustard remains a close second.

Perhaps the highlight of my university education came when a classmate and I wrote and assembled several of these monologues for a one-night-only performance of “An Evening with Stallion Cornell” at USC’s Bing Theatre. Great actors performing truly stupid monologues is a joy forever. And this guy’s performance, which involved ripping out a heart/KFC chicken sandwich from his chest and proceeded to pour ketchup all over it and eat it, still makes me laugh every time I think about it. (He was supposed to use mustard, but I freely forgave the departure from the script.)

I now offer a modified quote from another post:

If you’ve ever taken an acting class, then you know the constant demand for new material – especially monologues. People don’t generally speak in monologue form, so most plays focus on one line at a time, not whole paragraphs. Still, every acting teacher or auditioner demands that the actor perform a monologue, and the number of good monologues out there seems to shrink with each passing year.

That actually makes sense if we’re playing it old school. If you’re doing a classical piece, then there are only 37 Shakespeare plays to choose from, and everyone’s heard all the good stuff in them before. But the Troubled Young Actor Community is stuck on all the same tired modern pieces, and you hear the same ones over and over.  You get very sick of them very quickly.

Now I recognize that for auditions, I could have just written my own monologue, but the minute you did, you were being judged not just as an actor, but as a writer. And the actors who did that always looked like pretentious buffoons. Auditioning is nerve-wracking enough without having to have another layer of judgment slathered on top of the first one.

So I used my pseudonym Stallion Cornell to become a monologist.

I remember taking the stage on one audition and unleashing Stallion once again.

What piece would I be performing? I was asked.

“An excerpt from ‘The Worms of Hell,’” I answered.

The Worms of Hell? The director cocked his head. I’ve never heard of that.

“It’s by Stallion Cornell,” I said, assuming that he, like anyone who was anyone, would have heard of him. Which is an easy assumption to make, because everyone in the theatre likes to appear well-read and contemporary and comments on books and plays that they’re supposed to know.

All right, fine, said the director. Go ahead.

“What makes you think you’ll ever be able to understand?” I said. I was powerful. Commanding. And, most importantly, loud.

I laughed scornfully. Scorn is always good, too.

“What is time to a man like me? I’ve seen a nation die–I’ve seen all I’ve ever worked for crumple into one bloody heap! Can you give me time? Time for revenge? For death? For the angry fire that I will never tame? The churning, fiery volcano of hate that burns hotter than the sun itself?”

Oooh, I was cooking now. Time for just a smattering of PG-rated profanity.

“Damn you! Damn you to Hell! And may the infernal demons which slather for your soul consume your very innards in their unyielding flames! I’d offer you a biscuit first, but I don’t like you very much. So die! And let the worms nibble on your bowels.”

I got the part, and the director didn’t get a biscuit.

It was hard to keep my secret from my classmates, but the adults, if they ever caught on, never said anything. And it didn’t hurt that Stallion’s pieces were now being used at several auditions, on campus and off. My fellow actors, it seems, were just as bored with the old stuff as I was, and they used the Stallion pieces to cut through the noise.

So it became a simple thing to toss off a ridiculous monologue here and there, and everyone felt like they were getting away with something.

One of the proudest moments of my life was hearing that one of the actresses in my class used a Stallion Cornell monologue to land a recurring role on a soap opera back in New York. And back in Los Angeles, the last week of my tenure at USC, some the best actors in the school gathered in the largest theatre on campus and produced, to a full house, the entire collection of monologues I and a friend had written over the past four years, each as scornfully and loudly as possible.

It was billed as An Evening with Stallion Cornell.

My favorite was Jovan Yvan Rameau, now a world-renowned actor who spent that evening in a white spandex unitard, performing a monologue to his dead wife that involved him ripping a KFC chicken sandwich out of his chest and then pretending it was his heart, which he then proceeded to eat with a big mess of ketchup. The guy who videotaped the performance got some pretty rocky footage of that one, because he was trying to keep from rolling in the aisles. Jovan then pretended to die of leg injuries.

End this quote and all quotes.

I’ve mentioned Jovan twice now, but I wanted to cover this ground sufficiently so you could understand the context of what I’m about to share with you.

You can now watch, in its entirety, An Evening with Stallion Cornell, transferred from VHS and now on Vimeo in digital glory. 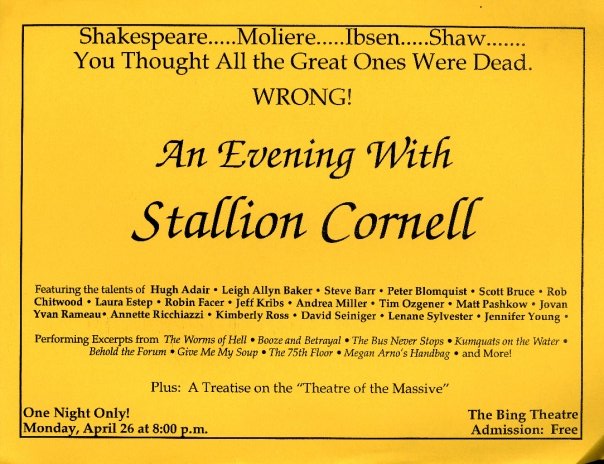 The conceit was that Stallion was one of the great playwrights of the ages, and all of these monologues were excerpts from his famous plays, works like “Booze and Betrayal,” “Rat in a Box,” and “Love and Guts.” Oh, boy, love and guts.

I don’t know if you will enjoy it or appreciate it as much as I do. Probably not. It’s utterly ridiculous, for the most part, but it truly represents the highlight of my theatrical life. It;s a thrill to watch so many young, talented people completely committed to hamming up material that is too absurd for words. The goal was for the actors to have more fun than the audience – except the audience ate it up. And how could you not?

One of the delights of rediscovering this is Ed Hofmeister’s treatise on a new theatrical art form that the fictional Stallion embodied – the Theatre of the Massive. I really wish this were a real thing. Maybe, after this goes viral, it will be.

Or maybe nobody will care. Maybe it’s just a bunch of punks having fun a quarter of a century ago. I can appreciate it on that level, too. I adore all the people in this video, and I miss seeing them every day. I am so grateful to them for this moment we shared, and for their genius and friendship, not necessarily in that order. I’ve reconnected with a few of them, but I’d love to see them all again. Maybe we could get together and do an encore.

Regardless, in case you want to skip to the best part, Jovan’s monologue begins at 55:00.

Two Years of Trump
Is That Doctrine?