None of these subject deserve a full-fledged rant of their own, and/or some of them are the subject of previous rants, so I’ve edited down these additions to four bite-sized chunks.

Mini-Rant #1 – The Earth Isn’t Getting Bigger

I could write – and have written – dozens of global warming-themed rants, because global warming alarmism keeps people in developing nations in crushing poverty and does so under the pretense that the alarmists hold the moral and scientific high ground. This is despite the fact that there has been no warming for 17 years and nine months, something the much-ballyhooed “consensus” utterly failed to predict, and the fact that none of the so-called “solutions” would alter global temperatures at all, something the much ballyhooed “consensus” has been forced to concede. 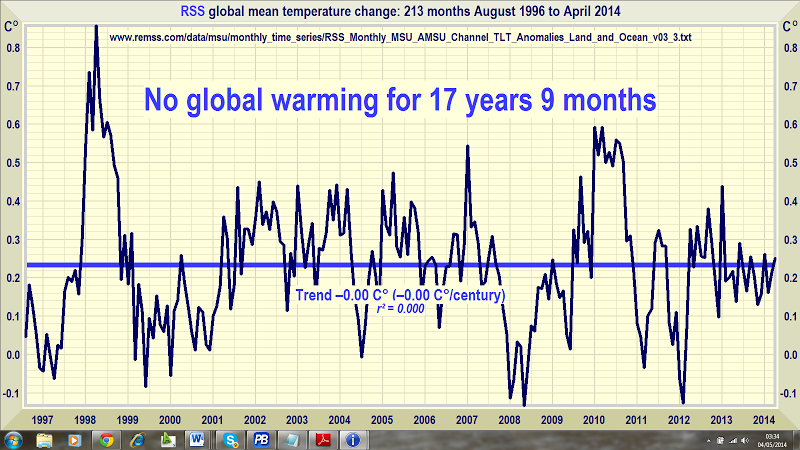 It’s not surprising, then, that alarmists are scraping the bottom of the panic barrel to come up with new nonsense to scare people into voluntarily supporting the willful impoverishment of just about everyone on the African continent. And today’s announcement that the earth is “expanding” because of our SUVs represents precisely that. They even have a picture where they can say “you can almost see it happening!” (Click on the link in the previous sentence to almost see it.)

“You can almost see it happening” reminds me of my cousin’s excuse for not lending a hand when my sister was moving – he couldn’t commit to help because “something might come up.”

Bill Maher, who I don’t like, referenced Kathleen Parker’s column about the Donald Sterling controversy where she called for all of us to edit our more outrageous thoughts before we give voice to them, even in private. “Always editing? I’d rather be a Mormon,” Maher said. “And that’s what we’d all be: Mitt Romney.” ‘Cause, you know, all Mormon are inexpressive automatons.

Granted, this isn’t nearly as bad as some of the dreck Maher has said, but it’s still stunning to me that nobody bats an eye when Mormons are mocked. This quote came to my attention when Mrs. Cornell told me she had heard it on Sean Hannity’s radio show, and that Hannity agreed with Maher and had no problem with Maher’s casual dismissal of all Latter-day Saints

This isn’t a crisis, but it’s obnoxious, and people ought to recognize the double standard.

Speaking of Mormons who do, in fact, speak their minds, I read this piece by an old friend of mine from college, titled “On The Subject Of My Highest And Holiest Calling,” wherein she takes issue with the church for referring to motherhood as a woman’s highest and noblest calling. To quote from the piece:

Telling women that parenting is our highest and holiest calling—while failing to say the same to men—displays a freakishly bad double standard.

She makes some very good points in that piece. Mother’s Day is often an exercise in cringeworthy patronization as Mormon men take to the pulpit to condescendingly praise the little women by their sides who made it all possible. (That wasn’t the case this Mother’s Day in our ward, though, as the speaker was pretty much perfect – and he even sang beautifully, too!)

Much of what thus writer mentions here is right on target.

I take issue, however, with the idea that Mormon men aren’t told that fatherhood is their highest and holiest calling. I have been told this innumerable times, and it’s also been pointed out to me that God could have us address Him with any number of titles, but we are supposed to approach him in prayer as “Our Father in Heaven,” so God Himself sees fatherhood as His highest and holiest calling, and we should do likewise.

I just read this piece over at NPR that tells us we should all be offended when we hear an ice cream truck drive through the neighborhood playing “Turkey in the Straw,” because “Turkey in the Straw” was used as the melody in the antebellum South for a really awful racist ditty whose title is too offensive to repeat here.

How stupid is this? Very.

Fact is, most melodies that have been around for centuries have been attached to a number of different lyrics. The text of Martin Luther’s “A Mighty Fortress Is Our God” is  sung to the tune of an old drinking song, and “The Battle Hymn of the Republic” was grafted on to the melody of “John Brown’s Body Lies A-mouldering in the Grave” to redeem that song from the various filthy lyrics that Civil War soldiers used to improvise in order to one-up each other. These songs are not stained by the history of the tunes that accompany them.

As for “Turkey in the Straw,” kids and adults who hear that annoying piece of drivel recognize it as, you know, “Turkey in the Straw” –  or maybe “Do Your Ears Hang Low,” which may be offensive to those with really big ears that they can tie in knots. It seems churlish to remind anyone that this innocuous tune was misappropriated a century and a half ago by racists who have been mouldering in the grave for over a hundred years.

I still take offense, though, because I loathe any MIDI jingle being broadcast by loudspeakers on top of a van in front of my house.

A FairMormon Rant
Bigotry on the Brink of Theocracy