Man, can you believe Rick Santorum said this? 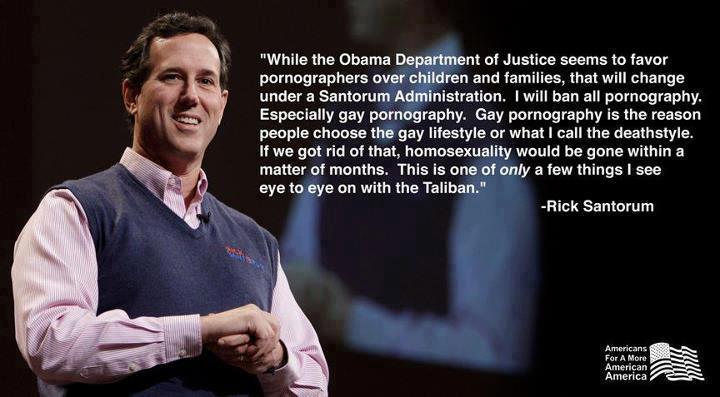 This was posted on Facebook by the group Americans Against The Tea Party. It has been “liked” by 2,348 people, generated 2,418 comments, and been shared 2,130 times. The fact that Rick Santorum never actually said this doesn’t seem to matter. Are we that eager to believe the worst about people we disagree with that we’re willing to resort to making stuff up?

On a completely unrelated note, can you believe the president said this?

I’ve tried to imagine how someone could film a more skewed, vicious portrayal of Mitt Romney’s religion than this BBC documentary, but, for the life of me, I can’t imagine what it would look like.

It doesn’t make me angry, necessarily, but it does bother me that John Sweeney, the guy narrating this ominous thing, gets all the simple details wrong. For example, he constantly refers to chapels as temples; yet when he stands outside the Boston Temple, he claims Mitt Romney was “a bishop here.” Well, no. Regular meetinghouses and temples serve very different purposes. If you’re going to warn the world about Mitt’s scary cult, maybe you could get the little things right if you want us to trust you on the big things.

It’s clear who Sweeney trusts, though – dissidents. He spends about twenty minutes interviewing modern polygamists who have zero connection to the church to which Mitt Romney belongs, and then another twenty or so interviewing unstable people who’ve left the church, one of whom claims to have been “followed,” although whether or not it was the church that was following him, he can’t be sure. Sweeney makes one offhand comment that the vast majority of the people who knew Mitt as a bishop really liked and respected him, but that comment comes before a lengthy interview with the one woman who didn’t.

At one point, for instance, some wackadoodle, random hairy dude claims that Mormon spies are trained by the CIA to learn how to snoop on church members’ private lives. Sweeney then cuts to a spooky shot of the Church Office Building and scarily intones that he has contacted a CIA agent “who refuses to reveal his name.” This CIA wannabe Deep Throat confirms… that the CIA does, in fact, employ Mormons. That’s it. That’s the smoking gun evidence of some secret Mormon spy network. No word if Lutherans who work for the CIA are also being trained to spy on parishioners.

After giving full hearing to reports by the angriest people imaginable about all the horrors of Mormonism, he then ambushes Elder Jeffrey R. Holland and asks him to deny these horrors, which he does, after which Sweeney presents some variation of “Oh, sure, Elder Holland. You may claim that you don’t follow people and shun people and cut them out of their families, but I’ve found thirty people” – Sweeney’s own, admitted number – “who beg to differ.”

That’s the tone of this piece – thirty loopy, ex-Mormon cranks vs. the entire faithful membership of the LDS Church, the whole of which gets about a fifth of the total screen time.

Yeah, that ticks me off. And there’s just going to be boatloads more of this crap between now and November.

You know who doesn’t make me angry? Gary Shapiro. He wrote a blistering indictment of Maureen Dowd’s anti-Mormon bigotry that is better than anything I could have come up with. It includes such gems as the this:

If a Presidential candidate was Jewish, a similar column could have been written about how Jews have strange views of the coming of the Messiah and are disproportionately wealthy and dominate so many visible professions and businesses. Yet, the New York Times would never print such a column.

Dowd has crossed a line of unacceptable bigotry by castigating a candidate because of his religion. No amount of quotes from other people (including saying that many “others” consider Mormonism a “cult”) makes it better. Holding one person accountable for all acts by their religion is as absurd as holding all Muslims responsible for extreme Islamic terrorists, all Jews responsible for the Jewish Defense League and all Germans for the Holocaust.

It is wrong and un-American to attack a candidate on the basis of religion, sex, race or ethnicity. If a major media outlet had attacked Sen. Joe Lieberman or New York City Mayor Michael Bloomberg for being Jewish, Obama for being black, or even Barney Frank for being gay, there would be outrage. Yet the Times published this xenophobic column.

Read the whole thing here while I find something else to get angry about.

Things That Make Me Mad
Me Am Conservative