I planned to focus this rant focusing on policy, but the news that Monica Lewinsky is resurfacing to air her dirty laundry over at Vanity Fair got the Clinton pathogens in my blood boiling again.

Here’s the deal – I don’t care if you agree with his politics. I don’t care if you think he’s charming. The fact of the matter is that Bill Clinton is a repugnant person, and he should be shunned by decent human beings. He treats women with less dignity than what he scrapes off the bottom of his shoe.

I remember the 1990 Clarence Thomas hearings, wherein the then-nominee for the Supreme Court was accused of making crude remarks about public hair and Coke cans, talking about pornographic movies, and badgering a woman for dates. The single source who made these accusations was countered by a score of women who insisted that Thomas’s behavior was above reproach, and, at the time, opinion polls suggested that the American electorate overwhelmingly believed Thomas and not his accuser.

This outrage led directly to what pundits called “The Year of the Woman,” which resulted in the election of two female senators from California and the election of perhaps the dumbest person, male or female, ever to serve in the U.S. Senate – I speak, of course,  of Patty Murray, Senator from Washington, who thinks Osama bin Laden built day care centers. 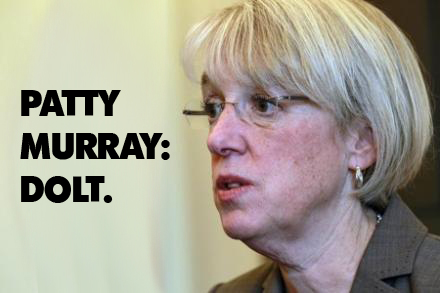 Four years later, I went to work for Senator Alan K. Simpson of Wyoming, who, as a senior member of the Senate Judiciary Committee,  questioned Anita Hill and poked significant holes in her story, which drew the ire of leftist women across the country. I spoke to many such women when I answered phones in Senator Simpson’s office. The message was that Simpson and other men “just didn’t get it,” and that a woman’s complaint of sexual harassment should be believed over the word of a boor like Clarence Thomas who was clearly just trying to cover his tracks.

The hypocrisy of this position in light of the left’s kamikaze defense of the Clintons is almost physically painful to contemplate.

Suppose, for instance, that everything Anita Hill said about Clarence Thomas was true. What would that mean? It would mean that Thomas spoke about a pornographic movie in a work environment, made a joke about a pubic hair being on a can of Coke, and badgered Anita Hill to go out with him. These are the actions of a boorish oaf. Such boorish oafishness, while certainly offensive, has a long way to go before it approaches Clintonesque behavior.

Clinton was first accused of rape in 1969 by a 19-year old English woman named Eileen Wellstone. Clinton admitted to the sex but said it was consensual, and, apparently, the Anita Hill standard that the woman is to be believed didn’t apply in 1969. Nor did that standard apply in 1972, when an unnamed 22-year-old woman made similar accusations to the Yale University police. These cases never went to court, which isn’t surprising, given the large number of rape cases that go unreported and unprosecuted today, when the legal environment is much more sensitive to the crime of rape than it was four decades ago.

But since then, the accusations have come from all quarters and from independent sources. Arkansas state troopers reported that seven different and unrelated women reported various sexual assaults by Bill Clinton over a period of decades. One of Clinton’s students when he taught at the University of Arkansas claimed that Clinton refused to let her leave the classroom and forcibly shoved his hand down her blouse.  A similar incident was reported by Kathleen Willey, who approached President Clinton in the Oval Office on the day her husband committed suicide, only to have the president forcibly place her hand on his erect penis. Feminist Gloria Steinem then wrote an op-ed piece insisting that Clinton should be praised for his the Willey incident because he stopped his sexual assault after that. (This became known as the “One Free Grope” rule.)

You know the names of some of the more famous Clinton accusers – Paula Jones, Kathleen Willey, and Juanita Broaddrick, who credibly claims Clinton raped her in 1978 – but there are many, many more that you probably don’t know.  The allegations have accumulated over a span of decades. They come from women of every education level and every socioeconomic class, although Clinton minion James Carville dismissed them all. “Drag a hundred dollars through a trailer park,” Carville said, “and there’s no telling what you’ll find.”

Just imagine if Alan Simpson had said something like that about Anita Hill – he’d have been tarred and feathered and run out of town on a rail. But Bill Clinton is feted and adored by millions, and none of these accusations have done anything to tarnish his reputation, even after the man lied under oath about his relationship with Lewinsky – which was legally abhorrent, but mild in comparison to the kinds of behaviors that Clinton has been accused of over the years.

“But they’re just accusations,” I can hear a straw man say. “None of them have been proven in a court of law.”

Well, first of all, some of them have. In a tearful 60 Minutes interview with his faithful wife Hillary by his side, Clinton vigorously denied his affair with Gennifer Flowers, even after audio tapes of him and Flowers surfaced. Clinton later acknowledged that affair in his Paula Jones deposition.  His relationship with Lewinsky, about which he perjured himself in both the Jones deposition and his later grand jury testimony, is now a matter of record. And it’s hard to pay off Paula Jones with a high six-figure settlement and then claim that her accusations were a whole lot of nothing.

But, okay, fine. He’s not a convicted rapist. And I’m confident that some of the allegations against him are baseless. But,  Mr. Straw Man,  do really believe that all of them are?

Democrats who once told us that the singular accusation of boorish oafishness against Clarence Thomas was to be taken at face value, and all those who doubted Anita Hill’s story were lowlife scum. But the dozens of accusations against Clinton, who has provably lied under oath about his sexual misbehavior, should all be dismissed, and the man is the keynote speaker of a Democratic National Convention where the theme is that Republicans are engaged in a “war on women.” And the warriors supposedly fighting for women call Clinton’s victims trailer park trash.

The hypocrisy is enough to make you want to gouge your own eyes out with a handful of toothpicks.

As long as the Democratic party hails Bill Clinton as its champion, it has no moral authority on any subject whatsoever. Columnist George Will once said that Clinton was not our worst president, but he was the worst man ever to serve as president. Yet in two years,  he will likely become the worst person, male or female, to ever serve as the president’s spouse.

A Prequel Rant
A FairMormon Rant