Kellyanne Conway has blessedly introduced the phrase “alternative facts” into the national lexicon, and she has been roundly and rightly excoriated for her claims that hard data is actually a matter of opinion. I mean, yes, the sky is blue, but I offer the assertion that the sky is green as an alternative fact. Others have offered any number of examples of this brave new subjective world, and most of them are funnier than mine has been. Here’s my favorite, provided by my Sanders-supporting daughter: 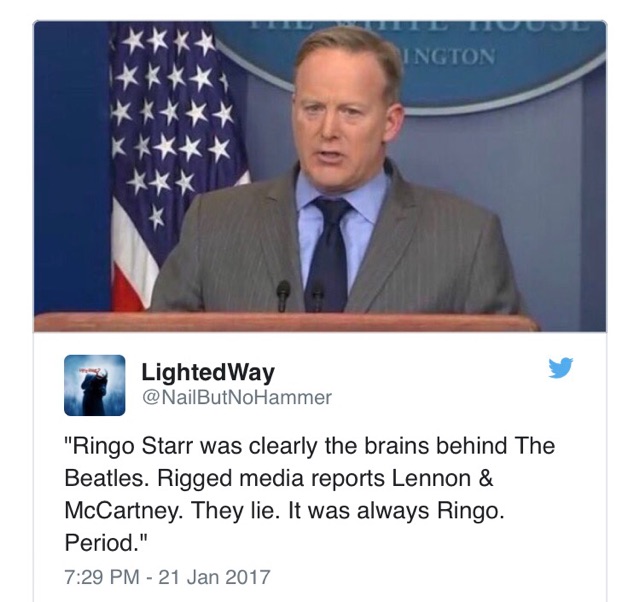 (Disclaimer: I love Ringo. Please note, however, that Paul is objectively the best Beatle. That’s beyond dispute.)

All this mockery is well-deserved, but there’s another lesson here that many Trump haters have overlooked.

I take you back to the halcyon days of the mid 1990s, when O.J. Simpson was found not guilty and large numbers of African-Americans erupted in applause. I remember seeing television footage of black people cheering when the verdict was announced, and I was dumbfounded. All the contemporaneous polls indicated a stark racial divide in how the verdict was interpreted, with a majority of whites overwhelmingly convinced that Simpson got away with murder, while a majority of blacks were celebrating because one of their own finally beat a corrupt and racist system.

For me, personally, it was jarring to see all this happening in my hometown. I grew up in LA. I attended many a family dinner in my cousin’s Brentwood home that was within walking distance of where Ron and Nicole were killed. How was it possible that so many people from the same place could interpret those facts so differently?

It wasn’t too long after that I was watching an interview with actor LaVar Burton, who put the whole thing into perspective for me. I can’t remember his exact words, and I can’t find them online, but his premise was that for many of his fellow African-Americans, it was almost secondary as to whether or not O.J. had actually stabbed and nearly beheaded his ex-wife and her friend Ron Goldman. So many of them had seen so many of their friends and family suffer at the hands of racist law enforcement that they assumed, from the outset, that there was no way O.J. could get a fair shake. To many, O.J. symbolized all victims of America’s collective racial sins. The actual facts, and even the alternative ones, weren’t nearly as important.

Or, as LeVar Burton summed it up – and these words I remember verbatim:

Seeing so many Trump opponents recoil in horror and astonishment at the victory of our new Cheeto-in-Chief reminds me of me watching the O.J. Verdict. For many of them, this may have been the first time that they were confronted with the reality that roughly half of the country is interpreting reality in a very different way. Because even Republicans who know full well that a good chunk of what comes out of Trump’s mouth isn’t worth the spittle that accompanies it also see him as a symbol of a Republican willing to fight back. In a warped way, even the alternative facts Trump serves up can feel like justice.

Again, I have to reiterate that I’m not a Trump supporter. I remain a conservative and a supporter of free markets, and many of the things at the top of the Trump agenda are anathema to my political point of view. In some very crucial ways, Trump is not a conservative, and because Trump has corrupted the party, I’m no longer a Republican. But I know full well what it’s like to be a Republican in a country where all the culture at large feels stacked against you.

I don’t think many Democrats know how it feels to watch a movie or TV show and have all the good guys making fun of everything they believe. I think many get offended when Republicans complain of bias in the news media because they’re not used to ABC, CBS, NBC, and every major metropolitan newspaper in the country taking editorial positions telling them their ideology is not only wrong, but evil.

(A tangent, but if you feel the need to comment on this post with an argument about how conservatives are wrong to complain about media bias, or who want to use this as a vehicle to launch into a tirade against Fox News or Rush Limbaugh, I respectfully suggest that you’re missing my point, which is that conservatives feel like elite opinion is stacked against them, and they respond accordingly. Whether or not these feelings are justified is a separate – and probably unproductive – discussion.)

So, okay, fade out, fade in. Along comes Trump. And for the first time in living memory, a Republican is fighting back. A Republican is telling the press that they’re biased; they’re liars; they’re hacks. And he wins by beating up on the biased, lying hacks, who have never before been defeated as soundly as they were on Election Night. Does that feel like justice to many? You bet it does.

So, yes, of course there were fewer people at Trump’s inauguration than were at Obama’s in 2009. (Why Trump keeps hammering on this point is beyond me. 2017 inaugural attendance was entirely in line with previous presidents, and a POTUS’s power and authority does not in any way correlate with the number of people who stand outside on a cold January morning to hear him speak live.) But please know that your mockery of Kellyanne and her “alternative facts” is likely to galvanize the Trumpers, not shame them into submission. The angrier you get, the happier they get. To them, your rage feels like justice.

The saddest part about all of this is that justice isn’t about feelings. It’s about facts, and not alternative ones. And if we’re ever going to live in a country where we all acknowledge the same set of facts, we have to be willing to walk a mile in the other side’s shoes. (Just make sure that if you’re going to walk in rare Bruno Magli shoes, don’t allow photographs of you wearing them surface after bloody size 13 Bruno Magli footprints have been identified at a murder scene.)