So the new Star Trek Into Darkness teasers were released today.

Now watch and behold the Japanese version, which exactly the same, except for the mind-blowing Wrath of Khan homage in the final shot.

Good stuff, I think. Yet the web is still abuzz as to who the bad guy is.

The answer is that it’s Gary Mitchell.

We’re talking about this guy:

Allow me to elaborate.

Buzz about the bad guy began years ago, and for quite some time, all we had to go on was a statement by an “insider” who said the following:

“It’s definitely a character that will make fans of TOS excited. Think along the lines of Harry Mudd or Trelane or Gary Mitchell or the Talosians or the Horta. Actually it’s one of those that I named.”

That hasn’t stopped people from saying it’s actually Khan, Ricardo Montalban’s iconic TOS villain who was the baddie in what is still unarguably the best piece of Trek ever put to film. Even now, at the Internet Movie Database, Benedict Bumberbatch, who is playing the new baddie, is listed as playing “Khan (rumored),” despite adamant denials by many.

“It’s not Khan,” insists Simon Pegg, AKA Scotty. “That’s a myth. Everyone’s saying it is, but it’s not.”

No, it’s not. It’s Gary Mitchell. Karl Urban, who played Doctor McCoy, let the cat out of the bag in July when he said, “””[Cumberbatch is] awesome, he’s a great addition, and I think his Gary Mitchell is going to be exemplary.” But then the producers, in the same article, denied it was Mitchell. So who is it?

Well, start with the “insider” perspective. If he’s telling the truth, the baddie is either Harry Mudd, a slovenly con man who was never more than comic relief…

Or it’s Trelane, an effete, foppishly omnipotent child who likes to dress up in Napoleanic getups and play the harpsichord… Or perhaps a Talosian, aliens with cranial issues…

Or maybe a really grumpy Horta, a big lumpy thingee that eats rocks. 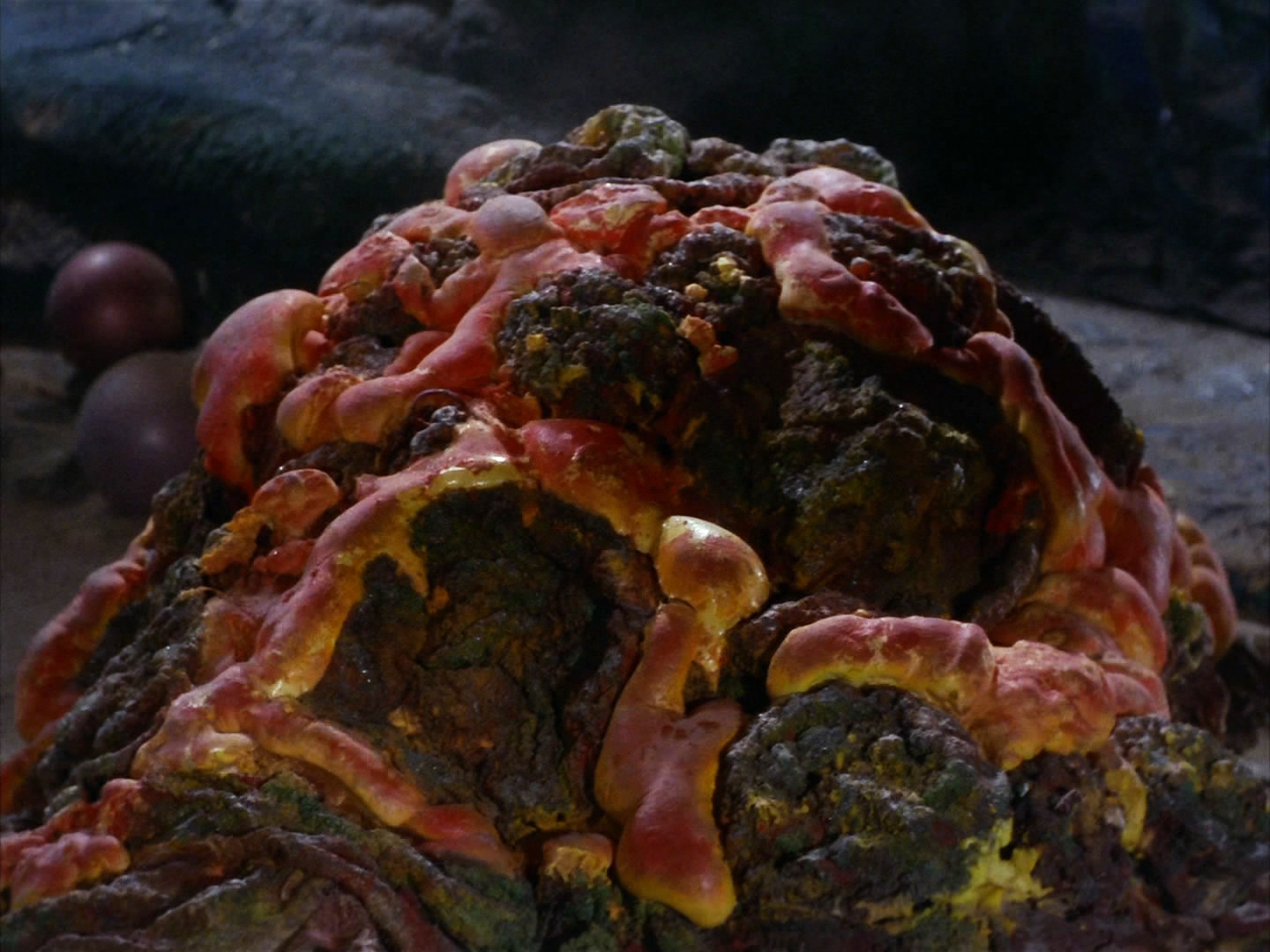 None of these fit at all. Mitchell does. It’s Mitchell.

And who is Mitchell?

Fans recall that our pal Gary was the bad guy in the second pilot episode of the original series – he’s an old friend of Kirk’s that gets godlike powers when they pass through the barrier at the edge of the galaxy, and Kirk is forced to kill him. The episode is “Where No Man Has Gone Before.” Spock yells a lot in it, and McCoy hadn’t joined the cast yet. And Mitchell makes a grave for his old friend mistakenly labeled “James R. Kirk.” I recommend a refresher viewing of the episode – it’s really quite good. (I wish I had a link for you. You used to be able to watch it on YouTube, but they took them all down.)The producers commissioned a series of comic books that they insist are part of the canon and lead up to the movie, and the first two issues were a note-for-note retelling of “Where No Man Has Gone Before,” only with the Chris Pine cast. The story is identical, except they take out Elizabeth Dehner, Mitchell’s love interest, who helped kill Mitchell originally. This time, Spock nerve pinches Mitchell and Kirk shoots him in the chest with a laser, and then they send his coffin into space a la Wrath of Khan. Dehner was played by Sally Kellerman, and she looked an awful lot like the blonde chick in the trailer, with identical blue shirts and hairdos.

They do mention, for no reason at all, that the blonde lady is an old flame of McCoy’s. Seems like foreshadowing to me.

Yeah, really pretty sure the baddie is Mitchell. We’ll know officially soon enough. The plan is to release the first nine minutes of this film in IMAX in front of The Hobbit. I’m thinking those nine minutes will be will be the filmed version of the first two issues of the Trek comic the writers commissioned, which constitute a beat-for-beat remake of “Where No Man Has Gone Before.” It will be told all flashbacky and speeded up, condensing the episode into a much shorter time frame, and, because it’s a recap of the second TOS pilot, fans will have no problem with it, and director J.J. Abrams will get credit for respecting his source material.

The writers have gone to great lengths to insist that the comics are part of the Trek canon. If so, why start the comics with a simple remake of the Gary Mitchell plot if it weren’t going to have implications for the movie? It also provides a perfect red herring for the producers, since Mitchell dies in it. “Look! Mitchell is dead! Can’t be him, surely. (Wink, wink.)” Much like Spock’s “death” at the beginning of TWOK during the Kobayashi Maru simulation.

Why leave out Dehner from the comic version, and why mention she’s a McCoy ex? Clearly Denner’s going to show up sometime later – pretty sure that’s her up above.

Also, Spock stops Mitchell with a nerve pinch, which is consistent with the first stills we’ve seen from this production. Behold:

the official synopsis released by Paramount lines up with Mitchell quite well:

When the crew of the Enterprise is called back home, they find an unstoppable force of terror from within their own organization has detonated the fleet and everything it stands for, leaving our world in a state of crisis. With a personal score to settle, Captain Kirk leads a manhunt to a war-zone world to capture a one-man weapon of mass destruction. As our heroes are propelled into an epic chess game of life and death, love will be challenged, friendships will be torn apart, and sacrifices must be made for the only family Kirk has left: his crew.

In the comic, the godlike Mitchell is presumed dead, but since he’s, you know, God, he isn’t dead. He’s just really ticked. He returns. Seeking vengeance on Kirk and Spock, who “killed” him. A one-man weapon of mass destruction. It all fits.

Some say, “it can’t be Mitchell, because Mitchell isn’t British.” To use a British word, that’s rubbish. In this reality, Nero’s machinations somehow moved the Mitchells to England before little Gary showed up. Honestly, the accent is such a minor nitpick – and it’s certainly not Khan’s accent.

Again, Khan makes no sense. Not an inside Starfleet guy; no reason for vengeance on Kirk in this continuity, and repeated, emphatic denials from everyone involved with the movie that Cumberbatch isn’t Khan. The glass scene in the Japanese trailer is clearly an homage to TWOK, but why does that mean Khan has to be the villain? Bond films have homages to earlier Bond films, but the appearance of the Connery-era Aston Martin in Skyfall didn’t mean that Javier Bardem was playing Goldfinger.

There’s more speculation out there. Some say its Soran from Star Trek: Generations. Some say Sybok from Star Trek V. Gack. Soran? Sybok? Villains from the two absolutely worst Trek movies ever made? Really? There are legions of fans who insist the atrocity that is Star Trek V isn’t canon. Who on earth would mine that dungheap for a classic villain?

Garth of Izar from the original series is being talked about, and while you probably have no idea who he is, he’s at least plausible, but he’s hardly godlike and not tied as personally to Kirk as Mitchell is. Given the Mitchell appearances in the comic, they seem to be laying the groundwork for Mitchell, who, as the featured player in the episode that started it all, has a more iconic status and a better revenge motive than Garth.

Some are saying perhaps its Jean-Luc Picard or his baddie clone, Shinzon, from Star Trek: Nemesis. The reason? Cumberbatch sounds a lot like Patrick Stewart. That’s really goofy, it seems to me. In practical terms, it requires a convoluted time travel subplot, and why does Picard or Shinzon need revenge on Kirk? And if it’s Shinzon, why is anyone paying attention to the appalling ST: Nemesis now when they completely ignored it when it was foisted on us ten years ago?

It’s Gary Mitchell. And the fact that I know that and care enough to write over 1,300 words about it in the middle of the night makes me a first class geek.