I’m a big fan of comedian Jim Gaffigan, whose penchant for sloth and junk food is consistent with my own. In one condiment-themed comedy bit, he highlights the absurdity of individual ketchup packets that bear a label stating “not for resale.”

He then sagely observes that, “If you’re in a position where you have to sell ketchup packets, ‘not for resale’ isn’t going to hold you back.”

That principle has eluded many of my Facebook friends, who have taken to posting the following graphic in response to the murders at UC Santa Barbara. 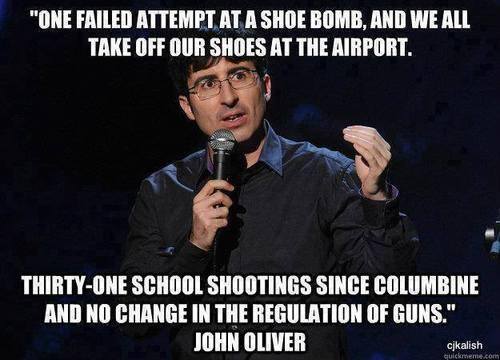 Yeah, swell. Except if you write a 100,000+ word manifesto about the need for a Day of Retribution to punish the universe for not letting you hook up with hot blondes, what are the odds that a change in the regulation of guns is going to hold you back?

Of the six people killed this weekend, half of them were slaughtered in their sleep by the combination of a hammer to the head and a knife to the neck. Which proposed change in gun regulation would have stopped that from happening?

This infuriates me every time there is a mass shooting like this. Yes, I agree there have been too many of them, although even one is too many. Yes, there will likely be many more. And I would be willing to do just about anything to keep them from happening.

“You would? Really?” I hear a straw man ask, more than a little incredulity in his voice. “Well, how about more gun control, then?”

All right? How about it? I’m on board.  Yes, Mr. Straw Man, I would be happy to accept more gun control. Heavens, I’d be happy to confiscate guns, ban guns altogether, and shred the Second Amendment to the Constitution.

“Oh, you have an ‘if’,” the straw man sneers. “Typical Republican gun nut. I knew there was a catch.”

‘No, I don’t. It’s time we did something, and you’re just making excuses.”

I’m really not. I have no affinity for guns. I do not own a gun; I have no intention of owning a gun. My ‘if’ is not offered in defense or praise of guns. It is, rather, a consideration that ought to be applied to every piece of legislation ever written, not just about guns.

Would more laws make these things stop? There is extensive research on the subject that shows that more gun laws would actually make the problem worse, not better. Law-abiding gun owners are the only ones who would stop getting guns if such laws were passed. The people planning Days of Retribution see such prohibitions as little more than a “Not for Resale” label on a ketchup packet.