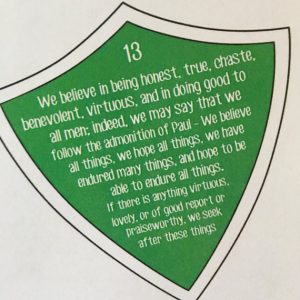 The LDS Church has 13 official Articles of Faith that have been canonized as scripture, and I believe all of them. Over time, I have come to a more comprehensive understanding of my own personal faith, and I have compiled a list of additional things I, personally, believe.

This list is in no way comprehensive and is certainly not infallible. It is also subject to revision, addition, and subtraction as circumstances may warrant. I have resisted the temptation to number them, because they are listed not in order of importance but in the order in which I thought of them.

I believe the Book of Mormon is exactly what it purports to be – not a fraud or “inspired fiction,” but an ancient religious record translated by the gift and power of God. It is the anchor of my testimony and the primary reason that, despite all my frustrations with the LDS Church, I will remain an active and faithful member.

I believe the Church of Jesus Christ of Latter-day Saints is the theologically truest church on the earth. If I discover a truer church, I will join it, although I don’t anticipate such a church existing.

I believe that “whether by mine own voice, or the voice of my servants, it is the same” means that the Lord honors the things he says through his servants, not that everything his servants say is the word of the Lord.

I believe that Latter-day Saints have an unhealthy aversion to the concept of Christ’s grace, and that has resulted in many Mormons believing that they earn the majority of their salvation, which is wildly incorrect.

I believe I have as much direct access to heaven as Russell M. Nelson does.

I believe that temples need not be nearly as ornate as they are and that we should spend far less money on them.

I do not believe that the U.S. Constitution is or will be hanging by a thread, or that the Mormons will be called upon to save it.

I believe that agency and infallibility are incompatible, which means prophets can make mistakes, sometimes very big ones.

I believe that the denial of the priesthood and temple blessings to people of African descent was, indeed, a mistake, perhaps the biggest mistake the modern Church has ever made.

I believe the November 2015 policy punishing innocent children of gay parents is the biggest mistake that is currently on the books.

I believe that there is a great deal of further light and knowledge the Church needs to receive with regard to our LGBT brothers and sisters, and that we are not actively seeking that knowledge with the vigor commensurate with the love we should have for our fellow children of God.

I believe that no question should ever be feared or blithely dismissed, and that it is possible to directly confront the thornier elements of Church history and doctrine and come out with a strengthened testimony on the other side.

I believe the possibility of the ordination of women ought to receive more careful and prayerful consideration than it has gotten thus far.

I believe that mixtures of religion and politics are toxic by default.

I believe the BSA has never had a mandate from heaven and that nearly all of my childhood traumas can somehow be traced back to the Boy Scouts of America. I’m immensely grateful to the Church for finally severing that connection.

I believe militant atheism is intellectually ridiculous. It’s one thing to doubt the existence of God; it’s another, much dumber thing to be certain no God exists.

I believe that religion has nothing to fear from science, and that the Old Testament makes no effort to distinguish the literal from the figurative and is therefore useless as any sort of scientific treatise.

I believe that truth exists independent of human interpretation thereof. That includes truth of all kinds – scientific, moral, ethical, spiritual, and musical.

I believe D&C 121 provides the template for how all authority should be wielded, regardless of whether that authority is sacred or secular.

I believe that “Mormon Doctrine” by Bruce R. McConkie, “The Miracle of Forgiveness” by Spencer W. Kimball, and “For Young Men Only” by Boyd K. Packer were all well-intentioned works that ended up doing far more harm than good. In particular, Elder Packer’s pamphlet, given to me when I was twelve years old and had no earthly clue what he was talking about, severely warped my adolescence by making me afraid of my own body.

I believe every temple sealing should be directly preceded by a non-temple wedding ceremony that anyone can be invited to attend, because no parent should be denied the right to see their children get married, and alienating an existing family is a terrible way to mark the creation of a new one.

I believe “Us vs Them” is a terrible way to live your life, regardless of who is “Us” and who is “Them.”

I believe most sports analogies are directly inspired by Satan.

I believe people who believe all manner of nonsense should be welcome in the Church, provided they are not actively seeking to tear down the faith of other members.

I believe it is in the best interests of both priesthood leaders and children to have parents present during interviews.

I believe kindness is a mandatory prerequisite for all of our interactions with other human beings.

I believe that’s all I have for now, but I reserve the right to revise and extend these articles as occasion permits.

Decency in an Era of Ding Dongs
Dinner Table Politics: Trump, Russian, and How to Pronounce "Magnitsky"