Yesterday, out of the blue, a reader commented on a post made just before the 2008 election about the following video. You don’t have to watch the video – indeed, I recommend you don’t. Just know that it’s a bunch of washed-up has-been celebrities praying to Barack Obama to save America and lower gas prices.

Well, three and a half years on, the gas prices are higher than they were before Cyndi Lauper and George Costanza gave their alms to the Almighty Obama. Why, Barack? Why are your people still in darkness? Why haven’t their petroleum prayers been answered?

Well, if you listen to the president’s remarks yesterday, you’d think it were all Rutherford B. Hayes’ fault.

President Obama is seeing his poll numbers plunge in direct correlation to the price at the pump, and, as is his wont, he’s chosen to blame somebody instead of take practical steps to solve the problem. He’s not blaming Hayes directly, but he’s comparing current Republican contenders to be our forty-fifth president to President #19. It seems the Republicans, like “founding members of the Flat Earth Society,” despise science and are therefore resisting the technological changes necessary to transfer from fossil fuels to the alternative sources of energy that would bring down fuel costs.

From the president’s speech in Largo, MD:

One of my predecessors, President Rutherford B. Hayes, reportedly said about the telephone: ‘It’s a great invention but who would ever want to use one?’ That’s why he’s not on Mt. Rushmore. He’s looking backwards, he’s not looking forward. He’s explaining why we can’t do something instead of why we can do something.

If that’s the case, Mr. President, then your predecessor has for more in common with you than he does with your Republican opponents. None of them oppose alternative sources of energy. They simply recognize that they’re nowhere near ready to pick up the slack, so, in the meantime, they think increasing domestic production of fossil fuels is a really good idea. They’re right. More domestic energy production will lower costs, decrease reliance on foreign oil, and create a buttload of jobs.

So who’s the one telling us we can’t do it?

“Since it’s an election year, they’re already dusting off their three-point plans for two dollar gas. I’ll save you the suspense: Step one is drill, step two is drill, and step three is keep drilling… We’ve heard the same thing for thirty years…It’s not a strategy to solve our energy challenge.” – Barack Obama. February 23, 2012

Really? Why can’t it be done, Mr. Hayes?

Yes, the President has made some recent halfhearted gestures toward increased drilling – it is a presidential election year, after all – but for every step forward, he takes a Keystone Pipeline-sized step back. In North Dakota, the fracking boom has lowered that state’s unemployment to 3.2% and forced McDonalds to pay burger flippers $15 an hour after getting $300 signing bonuses. There are similar resources in oil shale throughout Utah, Wyoming, Colorado, and New Mexico. Yet Obama ludicrously maintains the US only has 2% of  the world’s oil reserves.

When you include oil shale, the U.S. has 1.4 trillion barrels of technically recoverable oil, according to the Institute for Energy Research, enough to meet all U.S. oil needs for about the next 200 years, without any imports. And even this number could be low, since such estimates tend to go up over time.

So tell me again why it can’t be done, Mr. Hayes? 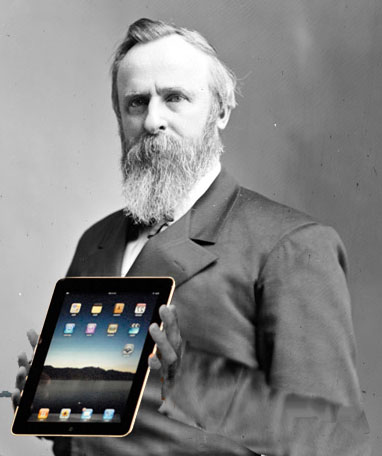 Actually, comparing Barack Obama and Rutherford Hayes isn’t fair at all to President Hayes. Because while ol’ Rutherford may have been a telephone skeptic, he didn’t bring the full weight of the federal government to bear against the telephone industry. He didn’t insist that we all wait until technology produced the iPad and we could FaceTime cheaply and conveniently. To be like Obama, Hayes would have had to give a speech saying “Skype is the future, my friends. We can’t just phone our way out of our communication problems.” Yet one of President Obama’s first acts in office was to cancel 79 oil and gas leases in Utah that had been in the works for seven years. He canceled the Keystone Pipeline. With a few token exceptions, he has done everything in his power to stifle domestic oil production.

UPDATE: Charles Krauthammer says all this better than I do here.