The Trayvon Martin case is really beginning to infuriate me.

I didn’t really plan on writing anything about it, because, really, what more is there to be said? But as a single, isolated tragedy becomes the genesis for a larger, warped racial narrative, I get more and more irate. And then I stumbled on this little gem, which was published in the free paper Salt Lake City Weekly: 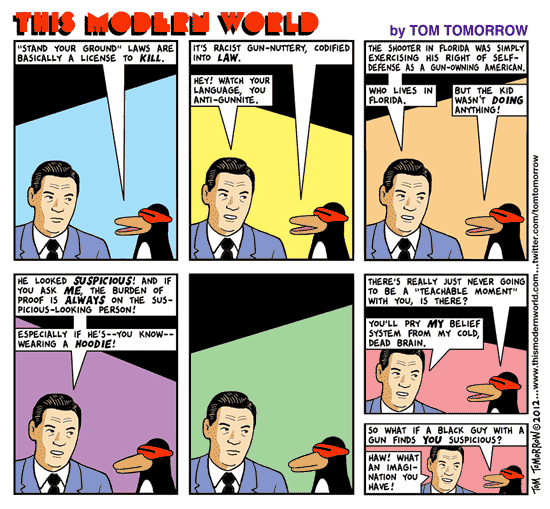 This sent me over the edge.

I have a question for the race-baiting thugs who are trying to exploit this young boy’s death to score cheap political points. Can you cite me a single, genuine instance of a conservative saying anything what this straw man in a suit says in this cartoon? Find me just one right-wing pundit or GOP elected official who thinks it’s OK to gun down defenseless black kids wearing hoodies. Go ahead, dig through the latest bile from Beck, Limbaugh, Hannity et al. Check out all of Gingrich, Santorum, or Romney’s speeches. For Pete’s sake, read Ron Paul if you have to. Go back a few years, or as far as you want. I’ll wait.

You will never, ever find anyone of any reputation saying anything remotely like this.

What you will find, however, is Spike Lee tweeting the home address of the wrong George Zimmerman in the hopes that some vigilante will break into his home and wack him. You’ll find a Twitter account advocating the murder of George Zimmerman that, as of this writing, nobody has bothered to take down. You have the New Black Panthers offering a $10,000 bounty on George Zimmerman, dead or alive.

In the aftermath of this hideous event, right-wingers are repeatedly accused of violent intent. And, meanwhile, all the incitements to violence are coming solely from the Left. What’s wrong with this picture?

This reminds me of when Representative Gabrielle Giffords was shot, and all the pundits instantly blamed the Tea Party. Then they discovered that the shooter was a deranged, stoner leftist who hated the Tea Party. Remember all the televised apologies from the people who claimed Sarah Palin had Gabby Giffords’ blood on her hands? Neither do I.

So now we have a case where a young black man was gunned down on the street by a white man supposedly for no other reason than he “looked suspicious” and was “wearing a hoodie.” Except the facts that keep coming in contradict the conventional wisdom at every turn. Some witnesses say Trayvon was the aggressor who had broken Zimmerman’s nose in a scuffle. The white-on-black racist angle is undermined by the fact that Zimmerman is Hispanic. There is much more to this story, but that hasn’t kept people from calling for blood and indicting all white people – or at least white conservatives – as innately genocidal, and that George Zimmerman is indicative of what all Republicans want to do when they see a person of color with a hood over his head.

Yes, that makes me mad.

Do all black people want to gun down British tourists? Do all Hispanics secretly long for the murder of six-year-old girls?  If you’re from Texas, does that automatically mean you’re eager to kidnap, torture, and murder teenagers? Even if the all the initial assumptions about the Martin case were accurate, which they’re not, how is this incident an indictment of every white person in the United States?

How did George Zimmerman somehow become my spokesman?

I lament Trayvon Martin’s tragic, needless death. I also lament the fact that some people are eager to find widespread racism where there is none and then stoke hatred in the name of decrying hatred. We’ll never become a color-blind country if we keep learning the wrong lessons.