So yesterday, I found a vegan café on the outskirts of town. I went in, sat down, took a look at the menu, and waited for my waiter. A granola-looking gal with a large tattoo and several nose rings came to my table and asked me if I knew what I wanted to order. I nodded, looked up, and ordered a bacon cheeseburger with extra onions.

She laughed. “I can help you with the onions,” she said pleasantly, “but that’s about it.” Confused, I asked her why she was refusing my order.

“Well, because a bacon cheeseburger isn’t vegan,” she answered, a little less pleasantly.

“Well, if you want a bacon cheeseburger, I recommend the Carl’s Jr. down the road.” Her smile had vanished.

I told her I didn’t want to go to Carl’s Jr., and that I had as much right as anyone to eat at her café.

I told her she was discriminating against non-vegans.

“We allow any and all non-vegans to eat here,” she said, “but we don’t allow them to change the way we do business, and if they decide to come in here and order off of our menu, they should know that this isn’t a place where they can expect to get a bacon cheeseburger.”

I told her there were more non-vegans than vegans, so she should accommodate the majority. I couldn’t understand why she was so unwilling to see reason. Eventually, she kicked me out of the café.

By that time, I was very angry.

So I called the government, and they were very helpful. They submitted health guidelines requiring all vegan cafés to accommodate the wishes of people who want to order bacon cheeseburgers. They were even so generous as to give them all a year to comply. But for some reason, the vegan cafés didn’t understand the importance of being inclusive at all. The president of the Vegan Café Association (VCA) sent out a letter to all vegan café proprietors, urging them to protest the law, even to take to the streets if necessary. Imagine! 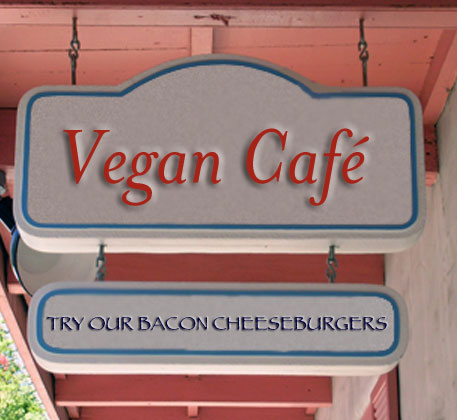 Fortunately, the cool people were all on my side. “The vegan hierarchy seems to be playing a cynical game of chicken and they don’t seem to care that the satiation and well being of millions of American omnivores are what’s at stake here,” said the president of the National Omnivore Rights Action League (NORAL). Even some vegans, many of whom were used to criticizing the VCA when they didn’t agree with them, came out in support of the new rules. “The VCA needs to get up to date,” one lady said. “This is the 21st Century. Everyone eats bacon cheeseburgers.”

At the same time, a prominent onion charity that used to give free onions to restaurants decided to stop providing onions to any restaurant that sells bacon cheeseburgers. This resulted in a public shaming from omnivores who were quick to point out bacon cheeseburgers only constituted 4% of the average restaurant’s business, so it was a scandal that the onion charity could think they could choose to whom they could give their onions. The onion charity then saw the error of their ways and called the whole thing a misunderstanding, and so the onions kept coming.

I’m pretty sure this parable doesn’t end with angry vegans recognizing that a government and a populace that forces people to do business in ways that violate their conscience is tyrannical.

Instead, it probably ends with an angry VCA that doesn’t have the support of its rank-and-file members, most of whom sit back and do nothing while the First Amendment becomes a quaint historical relic that only supports freedom of speech, religion, and association for cool people who like to do cool things. And, of course, it also ends with a lifetime supply of free onions.

You get to decide whether that’s a happy ending or not.

Why Is There Bill Maher?
Sorting Out Santorum