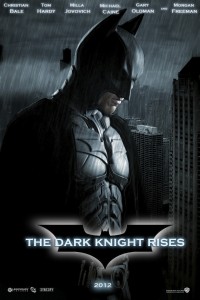 So the Cornells went and saw The Dark Knight Rises last night. The theater was half empty at a 7:40 showing, which I think is directly attributable to the tragedy in Colorado where a loonbat murdered total strangers in cold blood. I have written my thoughts about that and will publish them here if they’re not published elsewhere. There is, however, the possibility of them being published elsewhere, so I don’t want to step on that. I’ll post a link to them when it appears.

So what about the movie?

Well, it passed Mrs. Cornell’s wristwatch test. She judges how much she likes a movie by how frequently she looks at her watch before the end. As we left the theater, she triumphantly announced that she didn’t look at it once during the entire two-hour-and-forty-six-minute running time. Part of that was likely due to the fact that she thinks Christian Bale is pretty hot.

I didn’t look at my watch either, mainly because I don’t have a watch. I thought the movie was unnecessarily lengthy, but I was engaged in it throughout, and I was generally entertained. The plot of the film borrows heavily from the 1986 Frank Miller comic The Dark Knight Returns as well as the Bane-centric Knightfall storyline from the mid-1990s. I enjoyed being geek enough to recognize that, and I’m also thrilled that director Christopher Nolan took my advice on how to craft a sequel to The Dark Knight. If you’ve forgotten that advice, I reproduce it here for “See-I-Told-You-So” purposes.

“So the question is, who is the villain for the next film going to be? Batman’s rogue’s gallery is massive, but none of the villains in it can hold a candle to the Joker, especially after Ledger’s tragic star turn. So who will it be? … If it were up to me, I’d go with Bane, the guy who break’s Batman’s back in the comics… he could fit quite well into this version of Batman’s real world milieu.”

I eagerly await my royalty check.

Actually, this Bane was markedly different from the comics’ Bane, who frequently removed his goofy mask. In the comics, the mask was not used to administer painkillers, but rather to inject Bane with the steroidish drug called Venom, which gave Bane ridiculously huge muscles and super strength. I would have liked to see that Bane instead of this one, as the mask was an unnecessary distraction, especially because of the strange, electronic-y voice. The rumor is that oodles of people complained that Bane was impossible to understand in the previews, so they amped up his voice to 11 in the final mix. Bad move. It’s too loud; it’s too artificial, and, ultimately, it’s unnecessary. (Also, how does the guy eat?)

I was, however, pleasantly surprised by how well Ann Hathaway represents herself in this movie. I thought she was a poor casting choice at first – too cute and quirky to play the sultry Selina Kyle. It was surprising to watch as she projected genuine menace along with more sex appeal than I thought she was capable of producing.

And Joseph Gordon-Leavitt was remarkable in this thing. I went into this spoiler-free, so I kept leaning over to my daughter Chloe and saying, “I’m pretty sure he’s going to end up as Robin.” And I was right. I am a friggin’ genius. Be amazed.

So did I like it? Yes. As much as The Dark Knight? No. It’s bigger than that film was, but that’s not necessarily a good thing. The scope of this one was so huge that the more personal bits – Alfred’s tearful laments, for example – seemed to get lost in the shuffle. Lucius Fox also didn’t have much to do, and I kept wondering why Matthew Modine, as a sort of nebbishy, corruptish cop, was getting so much screen time. The size of the thing also enlarged the size of the plot holes, which didn’t bother me as much at the time as they do now.

So here are my top seven nitpicks. I will not skimp on revealing plot points, so avoid the numbered parts of this post if you care about that sort of thing:

1. What the Sam Hill is the “Dent Act?” What law could possibly end all crime in a large metropolitan city for eight years? And wouldn’t such an act have to be passed on a state or federal level rather than by a municipality?

2. How does Catwoman “kidnap” that congressman and keep him from phoning anybody as to his whereabouts? He seems to be going along for the ride willingly, yet he also seems too addled to do anything about it. Why? Is she drugging him? If so, why is he still “madly in love”with her after he escapes?

3. Bruce avoids Miranda Tate for months, if not years. He then has a single awkward encounter with her at a cocktail party, and then he invites her to see his magical fusion generator in a very businesslike, non-romantic setting. And then, suddenly, they’re in bed together…? Excuse me? Isn’t this the guy who has been a hermit for eight years pining over his lost love? How does he break out of that with a girl he seems to barely know?

4. Wayne Manor was rebuilt after burning to the ground in Batman Begins. Apparently, none of the original art burned down, though. But if Batman went into hiding directly after Harvey Dent died, why is there all that Batman fooferah in the Batcave? The manor wasn’t finished in The Dark Knight, so why would it now include extensive Bat-themed paraphernalia if, while he was building it, he knew he wasn’t going to be Batman anymore?

5. Billionaire Bruce Wayne appears again after eight years of seclusion. At precisely the same moment, Batman reemerges, too, using equipment that clearly costs a whole lot of money. How stupid are these people in Gotham that they don’t connect the dots? Jim Gordon, I’m looking at in your direction.

5. Bruce Wayne limps and has no cartilage in his knees – but some magic leg brace fixes that. Does he have that brace when Bane sends him to the pit prison? Doubtful. So how does he walk at the end of the film? Bane also smashes his vertebrae so badly that they’re sticking out of his back, but he doesn’t damage his spinal cord and paralyze him. Really?

6. No one can get on or off the island of Gotham or else Bane will blow the whole thing up. They can try to walk out on the frozen ice, but that always cracks and kills the people who attempt it. But after Bruce Wayne escapes his prison in an unnamed foreign country, he manages to not only catch some flight back to Gotham, or someplace near Gotham, but he then casually walks up to Catwoman in a deserted alley. Did he stroll over to the island on the ice? Seriously, how the %^&% did he get there?

7. WARNING: BIG ENDING SPOILER. READ AT YOUR OWN RISK.SERIOUSLY. THIS CONCERNS THE CLIMAX OF THE FILM

So Talia Al Ghul hated her father until Batman killed him. So she wants revenge on Batman for killing her father that she hated…? Hunh? And Bane is willing to go along with all of this because… why, exactly? Once you discover that Talia is the driving force behind everything we’ve seen, you start to wonder why Bane is invested in any of this at all. Plus Bruce gets a knife in the gut, but it doesn’t seem to slow him down much, even as he swims miles back to shore in his Batman outfit after bailing out before the nuclear blast. Pardon me?

Although it’s not the end of the nitpicks. For instance, Bruce spends a lot of time in his Batman suit talking to people who know who he is under the mask. So why does he have to use his goofy Batman gravelly voice when he talks to them? That voice has always annoyed me. Not like Bane’s voice, mind you, but it’s annoying.

All things considered, I went away pleased, as I can’t really imagine how they could have wrapped things up in a more satisfying way. I was, however, disappointed by the lackluster Man of Steel teaser, though. Who wants to see a Superman movie where a bearded Clark Kent spends his time on an Alaskan fishing boat?

The Order of the Arrow FAQ
Thoughts about the Aurora Shooting