Now the Obama administration insists that the crude anti-Islamic YouTube trailer
had nothing to do with the attack on our embassy in Benghazi. Um, OK. But when the president spoke to the United Nations last month, he once again took occasion to condemn the video and insist that “[t]he future must not belong to those who slander the prophet of Islam.”

On its face, that’s a noble sentiment. A pluralistic society shouldn’t encourage the slander of anyone, least of all the founder of one of the world’s great religions with over a billion adherents.

But the devil, so to speak, is in the details.

It just so happens that faithful Muslims consider any depiction of the Prophet Mohammad to be slander, even one intended to be complimentary. So while Christianity is replete with depictions in every media of Jesus himself and the most sacred stories of the faith, there is no parallel artistic tradition in Islam. And, really, how could there be? How does one recount the history of such a vital religious movement when the foundational figure, the star of the story, isn’t allowed to show up?

Believe it or not, that hasn’t stopped people from trying. 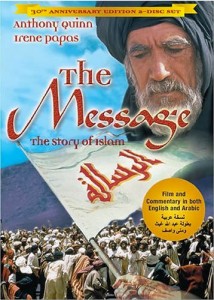 In 1976, an Islamic filmmaker named Moustapha Akkad produced and directed a major motion picture titled Mohammad, Messenger of God, released as The Message in the United States. It starred movie legend Anthony Quinn as – Hamza, Mohammad’s uncle. The taboo against physical portrayals of Mohammad extends to all members of his immediate family, too, so Hamza was the closest relation that Akkad could give any screen time.

Islamic custom requires that Mohammad be neither seen nor heard, so the prophet couldn’t appear via voice over, either. Instead, his presence was symbolized by a stately musical theme played on a pipe organ. People speaking to Mohammad would look directly into the camera, and as the soft organ music swelled, characters would repeat verbatim what Mohammad was supposedly saying. Despite all of these dramatic challenges, many critics hailed the film as both respectful and moving and a remarkable introduction to a faith widely misunderstood in the Western world.

Yet there were still riots.

Rumors had swirled during production that either Charlton Heston or Peter O’Toole had been cast as Mohammad, and neither was considered an acceptable casting choice. Riots and death threats plagued the film’s production, which took a staggering seven years to complete. When the film was finally released, a number of Muslims were still under the mistaken impression that Quinn was playing Mohammad, not Hamza, a misunderstanding exacerbated by the film’s poster, which showed Quinn’s bearded and stately visage floating above legions of Muslims riding off to war. The movie was decried with the same kind of furor now seen in protests against a piece of YouTube garbage, and it was banned entirely in most Arab nations.

Prior to its premiere in Washington, DC, an extremist group seized a Jewish community center, took 150 hostages, and threatened to blow the building sky high unless the premiere was cancelled, which it was. Theatre chains, not eager to encourage riots at the local moviehouse, stayed as far away from the film as possible, which resulted in a paltry box office take and no further attempts to make a positive film about Islam’s history until 2008, when another Muslim filmmaker announced plans for a remake.

Given current developments, such a film ever seeing the light of day seems increasingly unlikely. And, from my perspective, that’s very unfortunate.

A positive movie about Islam would fill a huge void in a popular culture that views Islam with misunderstanding and mistrust. It would also be an invaluable educational tool for a society that has learned more about Moses from Cecil B. DeMille’s “The Ten Commandments” than it has from the book of Exodus.

People of good will, then, agree with the president and don’t want a future that “slander[s] the prophet of Islam.” But it’s very hard to move toward such a positive vision when so many Muslims view both slander and respect as the same thing.

The State of the Race: Debunking Nate Silver
Biden Unleashed and Unhinged

One thought on “Remembering The Message”