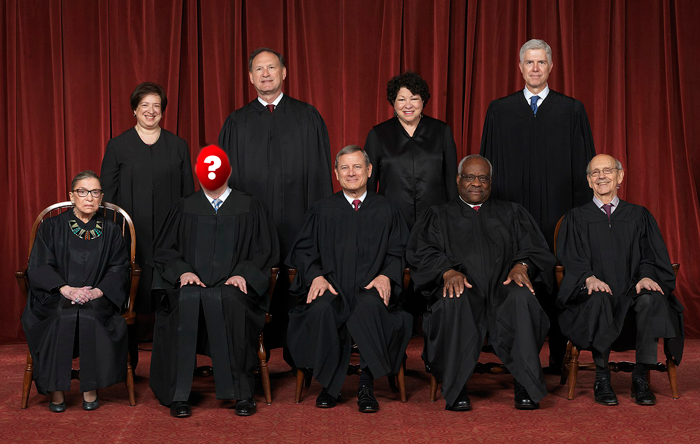 My last post was all about my philosophy re: Supreme Court justices, but I’m getting a lot of questions about the practical consequences of Justice Kennedy’s retirement.

What does this mean? Who’s going to replace him? What’s going to change? Is this the beginning of the apocalypse?

The TL/DR answers are:

If you’re satisfied with that four-part summary, look no further. If you want more, then read on…

1. Not as much as you think.
For all the talk about how Kennedy is a huge swing vote, he really isn’t. He votes reliably with the conservative bloc far more often than not, and his blistering Obamacare dissent was as hard right as anything Antonin Scalia ever wrote.  On economic issues, he’s a model of judicial restraint in ways that aren’t likely to make Democrats happy. Kennedy also wrote the majority opinion for Citizens United, which the Left universally despises, and, just recently, he sided with the conservatives upholding Trump’s fascistic travel ban.

True, Kennedy has broken with the conservatives on the two major social issues of our time, notably abortion and gay rights, which is why he’s the one Republican appointee beloved by the Left. But he’s not even particularly reliable on those two issues, either. He wrote the opinion telling the Colorado baker that he didn’t have to bake the damn cake, and he voted with the conservative majority in a recent abortion rights case, National Institute of Family and Life Advocates v. Becerra, which found that pregnancy centers don’t have to tell their patients about options for terminating their pregnancies.

But, yes, it’s likely that Roe v. Wade will see a fresh challenge under the new justice, and for most of the general public, which doesn’t know a penumbra from a porcupine, that’s the only issue that matters. I will address that under item 3. First, I want to point out who the new justice will be, or, more specifically, who it will not be.

2. Not Mike Lee.
I’ve had several people approach me with concerned looks on their faces asking how I will respond if Trump picks Sen. Mike Lee for the High Court. Lee won his seat by defeating my father, and, while I’m certainly not the most objective observer on the subject, I still think he’s been an embarrassment to the state of Utah as a lousy senator more devoted to ideological purity than constituent service.

That said, I really don’t harbor any personal animus toward the man, and I haven’t pulled out my Mike Lee voodoo doll in years. I think his obsession with the Constitution as a magical talisman is much better suited for the Supreme Court than it is for the U.S. Senate. All told, he’d probably be an entirely adequate justice. There are a number of reasons, however, why he will never get the chance to prove it.

The buzz around Lee is that Trump thinks that since he’s already a senator, the Senate is more likely to confirm one of their own with less contention than they would in confirming someone they don’t know. This is exactly backward. The fact that he’s a politician, not a judge, means he has a 100% political track record, complete with plenty of fodder for advocacy groups to use in attack ads. It also means that moderate Republicans – notably Susan Collins and Lisa Murkowski – have enough familiarity with Lee to breed an appropriate amount of contempt. The wafer-thin Republican majority in the Senate can’t afford any defectors, and Lee has a remarkably Cruz-esque knack for alienating his colleagues.

In addition, Lee has never been a judge, When non-judge Harriet Meyers was nominated by W., her nomination was eventually pulled after Republicans revolted en masse, in part due to her lack of judicial credentials. Lee is also a Mormon and a graduate of BYU Law School, which, although a solid school, is not a member of the rarefied fraternity of Ivy League-level institutions that serve as the bullpen for the judicial big leagues.

And while Lee has proven to be a reliable Trump toadie for the past two years, he had scathing things to say about Candidate Trump, and he refused to endorse The Donald even after he’d won the nomination. Trump is like an elephant in many respects, most of them physical, but the one thing he never forgets is disloyalty.

I don’t know who the pick will be, but it’s going to be the choice of the Federal Society, not Donald Trump, and the Federalist Society is not going to nominate Mike Lee. It won’t matter all that much, because of what is likely to change, namely:

3. Not a whole lot.
A friend of mine on Facebook, after Kennedy announced his retirement, said “You promised me that Roe v. Wade would never be overruled!” That’s not a promise I’m equipped to keep, but I’d still be willing to lay money on that being true. Roe has been repeatedly challenged and even eroded by subsequent decisions, but the core idea that government is constitutionally prohibited from making abortion illegal has endured for 45 years and is likely to endure for at least 45 more and beyond. The longer a precedent is allowed to stand, the more reluctant the Court is to pull it out by the roots.

The other factor in this is Chief Justice John Roberts, who has repeatedly demonstrated his squeamishness at presiding over seismic shifts against stare decisis. His Obamacare dissent was his first salvo in establishing himself as the future Kennedyian swing vote, but he’s fired several since then, including the recent Carpenter v. United States decision requiring law enforcement to get a warrant to pull cell phone records. Roberts sided against Kennedy and the three other conservatives and aligned with the RBG wing. Should Thomas et al try to burn Roe to the ground, it’s likely that Roberts will attempt to broker a less-drastic compromise or oppose such a move altogether.

And while this may be a tangent, it’s important to note that overturning Roe, as unlikely as that outcome is, would not suddenly make abortion illegal. Many states have already passed laws that go way beyond Roe’s protections of abortion rights, and those laws would still stand in the wake of a Roe reversal. States that outlaw abortion entirely would be subject to boycotts a la South Carolina’s bathroom bill, which was eventually repealed in the face of public outrage.

Yes, things may get heated and messy for awhile, but the legislative process is the one designated to deal with that kind of messiness. I firmly believe that one of the reasons this issue remains such a tinder box is that the High Court has denied Americans the right to hammer out appropriate compromises. Eventually, the legal landscape for abortion will more accurately reflect the will of the people than Roe currently does, which would ultimately mean less contention and violence.

Of course, all that presupposes that Roe will be overturned, which, as I say, is an unlikely outcome.

As for gay rights, the idea that gay marriage will become illegal is even less likely than a Roe reversal. I outlined why in a previous post, so allow me to quote myself:

[Obergefell v. Hodges] overturned only part of the Defense of Marriage Act. The other part – the section that states can ignore same-sex marriages performed in other states – is blatantly unconstitutional, since it violates the Full Faith and Credit Clause, which reads as follows:

“Full Faith and Credit shall be given in each State to the public Acts, Records, and judicial Proceedings of every other State.”

So if one state makes gay marriage legal, every state has to recognize those marriages.

Congress knew this part of DOMA was illegal when they passed it, and President Clinton knew it when he signed it. It was a cynical, craven pandering to an electorate which, at the time, was solidly opposed to gay marriage. (Yes, times have changed.) Clinton even publicly stated that he looked forward to the day when the High Court overturned the unconstitutional law he had signed.

So that’s out there like a Sword of Damocles waiting to fall on anyone who tries to overturn Obergefell. But even if it weren’t, the Court would now be in a position of not just preventing new same-sex marriages, but of nullifying thousands of existing marriages, something even the most conservative members of the Court would be reluctant to do.

All this should reassure those who think this is the beginning of the apocalypse, when in fact, it’s:

4. Not even a little bit.
This is not just because not much is likely to change, but because even if things do change and every decision you like is reversed, all that does is throw contentious issues back into the legislative arena, which is precisely where they belong. And in that unlikely event, the discussion will shift to what the proper role of the SCOTUS ought to be rather than whether or not a decision produces the policies your team likes.

To sum up – social media should spend less time worrying about the Supreme Court and more time complaining about how much Star Wars now sucks.

America's Referees: Their Emanations and Penumbras
My favorite Facebook thread ever