Two years ago, I wrote a lengthy article titled “Order of the Arrow Ordeal Secrets: The Final Word.” I thought that was, indeed, my final word on a subject that has attracted more people to this blog than any other. But I offer this addendum to share an NSFW comment I just received – edited for community standards, of course.

What’s interesting is that this comment came on the heels of my visit to Scout Camp yesterday.

It was Camp Hunt, to be specific, right along Bear Lake, which sits across the Utah/Idaho border. My youngest son is our troop’s Senior Patrol Leader, and I got to spend the day doing archery, watching corny skits, and playing Mafia by the campfire after the sun went down.

Other than the fact that camping is a miserable experience by definition, it was a pretty good time, with good company and plenty of father/son bonding. I know I’m supposed to be deeply bitter about the Order of the Arrow, but I managed to somehow enjoy myself.

However, it also included a pitch for Scouts to join the Order of the Arrow, featuring this very white dude in faux-Native American garb. 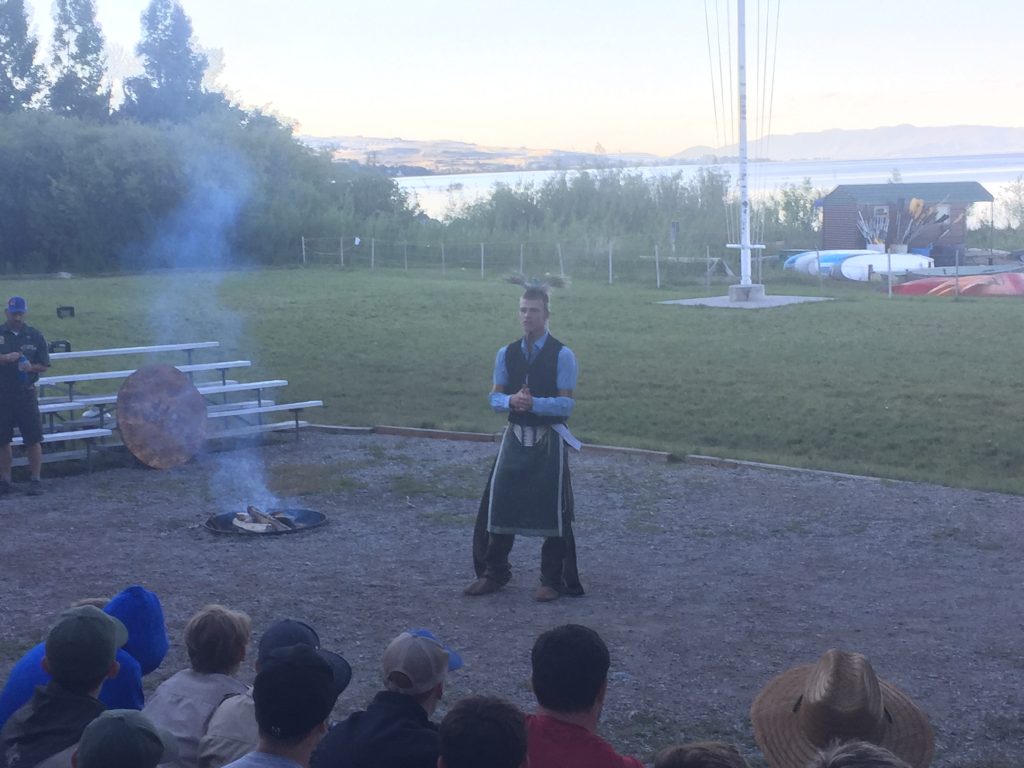 He even asked all current or former OA members to stand up and be recognized. And stand up I did. I was hoping he would ask me to say something, but he didn’t. Which is probably for the best, as anything I would have said probably wouldn’t have been helpful to anybody.

You know, kind of like the following comment, received from someone named Brad, who has chosen to defend the honor of his sacred organization with the following screed, which appears with dashes as substitutes for letters in words that violate the Scout Law:

You’re a F—ING LIBERAL PEACE OF S–T A–HOLE! Who probably never earned EAGLE SCOUT, and you only went through ORDEAL and never participated really, because you were too busy going to the mall and riding on your skateboard – to actually take the adventure and go to a Boy Scout National Jamboree where you meet diligent, disciplined, educated, outdoors-man-type young men READY FOR ADVENTURE coming from all cultures, countries, languages and backgrounds and getting to interact with tose people and et their food and learn their language and customs and guess what young boys in REAL BOY SCOUTS D: Mr. Greek, and Mr. American, and Mr. Kenya and Mr. China, and Mr. Australia, and Mr. Russia, and Mr. India, and Mr. Argentina all sit around the campfire and whittle neckerchief slides (the reason why the BSA was started) – apparently you don’t value you your neckerchiefs – I still have all mine – they make great tourniquets or did you never get past 2nd class and earn the First Aid Merit Badge.

As far as your STUPID CONSPIRACY THEORY regarding the OA being a secret arm of the BSA associated with the Taliban?????????? WTF? You might honestly be the most retarded idiot f—ing douche bag cum dumpster trash can lid complete fat a– piece of s–t, meaning that you and your STUPID points of view are neither accurate or warranted. Effectively your arguments are nothing but the ramblings of a little picked on pussy child. GET UP A–HOLE BE A F—ING MAN! ARE YOU KIDDING? BOO F—ING HOO. I AM SOOOOOOO SORRY YOUR PRECIOUS FEELINGS GOT SO TERRIBLY HURT WHEN YOU WERE “poor me, i’m cold tired wet and hungry”. Well MOUNT UP B—H. Some of that training carried me through the Army as an Infantryman, and Airborne School, and Ranger School, and in 2003 to the invasion of Iraq, and after I got out of the ARMy after being shot – I went back overseas to serve my country more as a Contractor – also getting shot at in multiple countries. But the best part is….I learned earning my Ordeal, Brotherhood, and Vigil, as well as my EAGLE SCOUT, I learned how to survive WITHOUT B—-ING.

So YOUR F—ING WELCOME. Because the OA “Ordeal” and the “Brotherhood Ceremony” and the “Vigil Honor” plus being a Cub Scout, Webelo, and finally an EAGLE SCOUT – because that early training taught me how to live, survive, and taught me how to lead and love my fellow scouts. I was then prepared when I volunteered for the infantry and airborne and ranger and combat….so you can NOW appreciate the opportunity and right to voice this complete BULLS–T. So “DOUCHE BAG” your F—ING WELCOME – C-NT!

And that is all Brad had to say on the matter.

I don’t have anything to add, really, or to say in response. Instead, I offer this one Arrowman’s passionate defense of the organization he loves and let the reader draw their own conclusions.

And that’s my last word. Really. (Until the next last word.)