Got a very nice message from an old friend who told me she appreciates what I write, even though she disagrees with me on climate change and Hillary Clinton being evil. So I thought I’d talk about those two things as I keep blathering on about our new Trumpian reality.

With regard to HRC, my opinion of her no longer matters. The greatest thing about this awful election is that the Clintons are now permanently gone from the national stage, and I need not ever comment on or even think about them again. I wish Hillary a long, happy, pleasant retirement, and I hope she has plenty of time with her grandkids. At this point, any further investigation of her is a waste of time and resources and serves no purpose. I’m happy that Trump seems willing to let it die, even if Jason Chaffetz doesn’t. (He should let it die, though. Hillary’s gone. Move on, folks.)

As for climate change, I’ve been thinking about that since people began hyperventilating about Trump’s removal of the climate change section of the White House website. As I noted earlier, it’s an issue too poisoned by politics to discuss rationally. I’m therefore going to try to approach it from a different angle in the hopes that I don’t fall back into the tired partisan grooves that make for a tedious discussion.

Let’s begin with President Obama, who felt strongly enough about the issue to put a section about climate change on the White House website. That’s all well and good, but the undeniable truth is that Barack Obama, over the course of eight years, did absolutely nothing to lower or even slow the rise of global temperatures.

That’s not to say he didn’t try. True, he issued executive orders that would have increased the cost of energy by 30% and done nothing to affect the climate, but those orders got bogged down in court challenges and were never implemented. During his tenure, domestic production of fossil fuels rose dramatically, due primarily to fracking that Obama hated and tried to stop, but, again, couldn’t. His partisans can applaud his intentions, I suppose, but in terms of what he did in practical terms, it’s the equivalent of what Trump plans to do – absolutely nothing at all.

But Obama sure talked a good game, didn’t he?

He’s the one who insisted that “climate change is a fact” in his 2014 State of the Union address. He wasn’t wrong, but the problem with this statement is a very simplistic distillation of a rather complex issue. Climate change is much more than just “a” fact. It’s lots of facts. It’s also a large number of assumptions and, increasingly, a whole lot of political agendas that often have little or nothing to do with assumptions, facts, or anything resembling reality.

It’s an indisputable fact, for instance, that carbon dioxide traps heat in the earth’s atmosphere, and that human activity generates carbon dioxide. That fact is undenaiable, and when you call me a “denier,” remember that this is a fact I do not and cannot deny.

From this fact, however, it does not necessarily follow that forcing all existing coal power plants to cut their carbon emissions by 30% from 2005 levels by 2030 is a good idea, which is what Obama wanted to do. A study conducted by the U.S. Chamber of Commerce found that these emissions reductions would have a negative drag on the economy at a cost of about $50 billion per year. The price tag for hitting Obama’s arbitrary targets will therefore be somewhere in the neighborhood of $700 billion.

So what would we get for all that money?

On this fact, the scientific consensus is clear: we would get nothing at all. The emissions cuts would neither reduce global temperatures or even slow their rise. That’s the finding of the Obama administration itself, which determined that shutting down all coal-fired plants in the country would only reduce the increase global temperatures by a paltry five one-hundredths of a degree by the year 2100.

But we wouldn’t be shutting down all coal-fired plants. We’d only be cutting their emissions by a third, and we’re aiming for 2030, not 2100. With those variables an applying the Obama administration’s own assumptions, that means that those now-dead regulations would have slowed rising global temperatures by a few thousandths of a degree, a measurement that is all but indistinguishable from zero.

In other words, they would have been a total waste of time, money, and resources. You don’t have to be a climate scientist to understand the math.

This is almost criminal when you consider who will bear the cost for this kind of feel-good government overreach. Coal plants facing steep increases in costs would pass those increases on to their customers in the form of higher prices. This ends up acting as an extremely regressive tax, 99% of which would be borne by the 99%. When President Obama promised in 2008 that electricity prices would “necessarily skyrocket,” he seemed to think that was a price worth paying to save the planet. And, indeed, if these regulations could have actually saved the planet, that might be a discussion worth having. But they wouldn’t save anything, and they’d cost a great deal. The same is true for the Paris climate agreement. Even if fully implemented, it would have no discernible impact on the climate. It’s all nothing but empty – and expensive – symbolism.

We need to be wise environmental stewards, which means to approach every challenge with our eyes wide open. Everything the government does should be subject to a rigorous cost/benefit analysis. The previous administration has thrown a great deal of money at a number of boondoggle projects – anyone remember the Solyndra debacle? – that have had the appearance of being environmentally responsible, but ultimately were useless. They were only “green” in the sense that they cost billions of taxpayer dollars.

That said, there are a number of reasons why we need to make every effort to move away from fossil fuels to renewable energy sources. Technology, not regulation, is our best bet in thwarting a climate crisis, and free markets are far more likely to come up with solutions than the federal bureaucracy. When someone discovers they can get rich by figuring out a way to effectively harness solar power to power cars and heat our homes, many of our current energy and climate problems will vanish virtually overnight.

That’s why I take heart in the fact that some heartless, capitalist pig with no regard for anyone but himself is going to figure out how to make billions of dollars by inventing a car that can turn crap into fuel. As soon as someone can get rich by inventing a sustainable power source, fossil fuels will go away of their own accord. 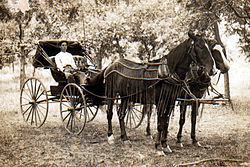 That, incidentally, is how cities drowning in horse crap from the animals pulling their buggies were saved from a sanitation nightmare. Back in the day, the Model T was an environmental miracle that washed the feces off all our city streets.

The best thing the government can do to help make that transition is to take a common sense approach and, whenever possible, get out of the way. Which, realistically, is what Trump is going to do, and what Obama, despite his best efforts, actually did.