Let me share with you my personal incentive to lose thirty pounds.

I was part of a church performance called “A Night of Broadway,” where I was asked to sing “Mama Says,” a song from the stage musical “Footloose.” I had never heard it prior to being assigned to it, but it seemed goofy enough for my personal oeuvre. I asked if I could accompany myself on the guitar rather than perform with a prerecorded track. What I didn’t do is ask whether I could tell a joke at the beginning of my number – this was a one-night-only gig, and I figured there wasn’t much they could do to stop me.

So here’s the joke:

A cowboy walks into a saloon and says, “I’m lookin’ for an outlaw.”
The saloon keeper says, “Well, what does he look like?”
Cowboy says, “He was a guy wearing a paper hat, paper shirt, paper spurs, and rode in on a paper horse.”
The saloon keeper says, “Man, I’d have remembered a guy like that. What’s he wanted for?”
(Pause for effect)
“Rustlin’.”

I told that every night in Jackson Hole to warm up audiences at the Grand Teton Mainstage Theatre. It’s stupid, but you can’t help but laugh. I figured the other performers in this show were taking themselves way too seriously, and I wanted to break the ice.

From what I could tell, it worked. I got a great response to my number, and I was quite proud of it. It had been quite some time since I stood in front of an audience and sang by myself. I thought I acquitted myself well.

The director of the show set up a Facebook page to post pictures of the performance. She didn’t post everything it once, but the first phot of my performance showed up rather quickly. 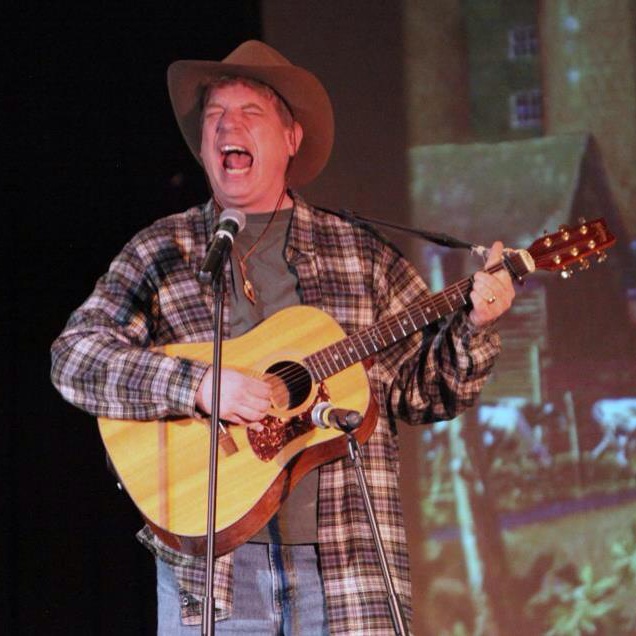 I was quite pleased with this photo. I thought I looked good, despite the double chin. I liked the goofy face I was making, and I quickly made this my Facebook profile picture.

The director soon started to post video of the performances, too. Being the Facebook addict I am, I couldn’t wait to post the video of the whole performance to show off my chops. I considered this evidence that, after all these years, I’ve still “got it.” I’m not sure what it is that I’ve got, or if it’s worth getting, but whatever I had gotten before, I still got.

About two weeks ago, the video was posted. I’ve never shared it with anyone – until now.

Here it is. I’m betting you’ll see why I wasn’t eager to have this on display for public consumption.

I look at myself every morning in the mirror, and I never see a fat person. Oh, sure, there’s a little bit of gut there, but that can be sucked in. And if I just stick my neck out a little, the double chin sort of goes away. And I walk around with the illusion that I’m really not that very removed from the geeky beanpole I was before sometime around my thirtieth birthday, which was when the pooch started to grow. (Cleta, my oldest daughter, affectionately refers to my gut as my “food baby.” You’d think I would have taken the hint by now.)

Watching this video, then, woke me out of my stupor. From the moment I waddle out on to the stage, you can see something’s up. Unlike the photo, this was filmed from the side, so you can see the guitar resting on my generous belly at a 45-degree angle. And the double chin is omnipresent. I couldn’t look at anything else. I mentioned this to a friend of mine, who reassured me that “the camera adds ten pounds.” If that’s the case, there must have been four or five cameras on me that night.

This was particularly problematic for me, as, for the past two years, I’ve been working with a company called the Belief Workout, which uses cognitive tools to teach people to change how they think in order to change their weight. I’ve personally been teaching the classes – looking like the guy in that video. Nobody ever complained, and the results of our teaching have been great – but I never really bothered to change my own thinking or change my own weight. Oh, I made some half-hearted gestures in that direction, but I didn’t really see it as an urgent issue. That was someone else’s problem, not mine.

Until, of course, I saw this video.

So I’m now applying the ideas we teach, as well as using the automated phone coach that’s part of our program. We’ve also partnered with a company called Somae Health, which uses live mentors to help you follow their whole foods regimen. I’m diving in to the Somae program, which means adios to cheeseburgers and diet Cokes. My kids don’t think I can do it, and my wife, while supportive, is also skeptical. But I don’t ever want to watch a video of me singing like fat Elvis. My goal is a lifetime of skinny Elvis. I’ll keep you apprised of my progress.