My Esteemed Colleague and I have had many lengthy and contentious political exchanges of late, most of them focused around his newfound appreciation for Joseph Stalin and the assignment of responsibility for the instigation of the Korean War. I shan’t recount all the details here, but, instead, will focus on one subset of the discussion that has triggered a theological reassessment on my part.

Specifically, My Esteemed Colleague believes that raising children to follow any given religion constitutes child abuse, because all religions are based on irrational threats of eternal damnation and hell.

So let’s talk about hell. 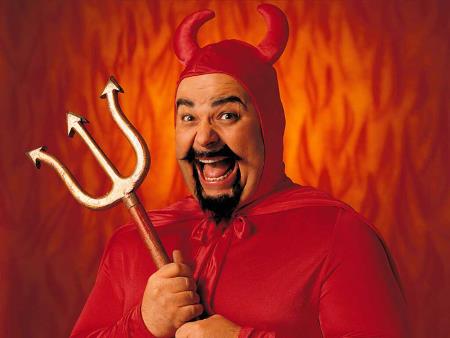 I can recall being quite terrified as an impressionable youngster by certain passages in the Book of Mormon that seem to coincide with My Esteemed Colleague’s diagnosis. Witness this pleasant little passage from 2 Nephi 28:23:

Yea, they are grasped with death, and hell; and death, and hell, and the devil, and all that have been seized therewith must stand before the throne of God, and be judged according to their works, from whence they must go into the place prepared for them, even a lake of fire and brimstone, which is endless torment.

This kept me awake at night. I remember looking up the word “brimstone” and realizing the lake of such stuff would not be a pleasant place to spend eternity. It wasn’t until I brought my terror to the attention of my mother, who was allegedly abusing me by indoctrinating me into Mormondom, that I gained a new, and, I think, proper perspective.

In a nutshell, Mom explained that we Mormons believe that endless torment isn’t endless.

She directed me to the 19th section of the Doctrine and Covenants, which contains this gem in verse six:

Nevertheless, it is not written that there shall be no end to this torment, but it is written endless torment.

Confused yet? I was. The rest of the section, however, sheds a bit more light on the subject.

4 And surely every man must repent or suffer, for I, God, am endless.

5 Wherefore, I revoke not the judgments which I shall pass, but woes shall go forth, weeping, wailing and gnashing of teeth, yea, to those who are found on my left hand.

6 Nevertheless, it is not written that there shall be no end to this torment, but it is written endless torment.

7 Again, it is written eternal damnation; wherefore it is more express than other scriptures, that it might work upon the hearts of the children of men, altogether for my name’s glory.

8 Wherefore, I will explain unto you this mystery, for it is meet unto you to know even as mine apostles.

9 I speak unto you that are chosen in this thing, even as one, that you may enter into my rest.

10 For, behold, the mystery of godliness, how great is it! For, behold, I am endless, and the punishment which is given from my hand is endless punishment, for Endless is my name. Wherefore—

My favorite part of this is where the Lord admits that references to hell are “more express than other scriptures,” because such language will “work upon the hearts of the children of men, altogether for my name’s glory.” In other words, the Lord concedes that he uses such language to scare the hell out of people, so to speak, and sometimes that makes people better. But with regard to actual hell, I learned long ago that one need not fear that God will inflict infinite punishment for finite offenses. The punishment may be described as endless, in that there will, always and forever be punishment for sin, but no matter our level of wickedness, our participation in such endless punishment will only be transitory.

This, among other things, sets Mormonism apart from orthodox Christianity, which generally preaches a static heaven and hell, both of which are fixed and immutable. As such, I fear both. A static heaven sounds tremendously boring, and a static hell is too monstrous to contemplate. According to the doctrines of my church, I have no real fear of hell in the traditional sense that My Esteemed Colleague might recognize, and I make every effort to teach my children that the goal in following Christ is not to avoid hell, but rather to receive as many benefits of heaven as are available in this life and the life that’s coming.

Well, Mormons preach that the actual division closest to the static heaven/hell model can only be found between death and the final judgment, but even in that case, the Mormon version differs significantly from tradition, and we teach that people will have the opportunity to get out of the figurative brimstone lake. The division only exists as a result of people’s acceptance of Christ, and, should they accept Christ when given the opportunity in the world of spirits where we will live prior to the Resurrection, they will end up on paradise, not prison. This solves the theological quandary that has plagued Christianity for millennia: i.e.what happens to all the people who die without any opportunity to accept Christ’s sacrifice? Traditional explanations suggest that they end up burning forever through no fault of their own. What kind of unjust, hideous deity would create something and that inflict eternal suffering upon it for crimes it was never given the chance to understand?

Thankfully, God is both just and unhideous.

After the Judgment and Resurrection, everyone will be assigned to a Kingdom of Glory, and even the most loathsome and foul among us will eternally enjoy a redemption that “surpasses all understanding.” (Doctrine and Covenants 76:89) So people who reject Jesus’ payment on their behalf will eventually pay for their own sins, and that payment may be lengthy and miserable, but once the account is settled, an eternity of glory and happiness awaits them.

Glimpses of this worldview can be found in the Bible. In the 16th Psalm, David, after having murdered Uriah in order to get adulterous access to his bride,rejoices that God “will not leave my soul in hell.” Note that he doesn’t claim that he’ll avoid hell altogether, only that God won’t abandon him there.

The doctrine does suggest, however, that there is a tiny, tiny sliver of humanity that will receive an eternal reward comparable to being abandoned eternally. These are the so-called “Sons of Perdition,” who commit what is called the “sin against the Holy Ghost.” In the New Testament, Matthew 12: 31-32, the Savior himself speaks about the “unpardonable sin:”

Mormons believe that committing this sin is very, very difficult to do, and 99.9% of all the people who come to this world wouldn’t be able to do it even if they tried. Joseph Smith described at as follows:

“He has got to say that the sun does not shine while he sees it; he has got to deny Jesus Christ when the heavens have been opened unto him, and to deny the plan of salvation with his eyes open to the truth of it.”

In other words, to commit the unpardonable sin, one would have to, by means of the Holy Ghost, have a perfect, unassailable knowledge of who Jesus is and what he did, and then knowingly, willfully oppose him anyway. That requires a level of knowledge that has been given to only a tiny group of people throughout all of history, and, among those with that capacity, such deliberate rejection of the truth is exceedingly rare indeed. I think, out of the billions who go through the mortal experience, the people who will ultimately be subjected to such a fate can likely be counted on one hand.

As I get older, and watch people from all walks of life muddle through the disappointments and miseries of mortality, I become increasingly confident that the Lord did not send us here to fail. He operates according to his own timetable, but whether in this life or the next, it is likely that more of us will come to appreciate his mercy, and the reward that awaits us is far, far greater than we can now conceive.

All Order of the Arrow Ordeal Secrets Revealed - Again!
Equal Time for Catholics