For the past two days, I have had a series of exhausting Facebook discussions about the election results. In order to make my point, I’ve had to defend, albeit halfheartedly, some truly awful people, Donald Trump being the chief among them, but Steve Bannon being a close second.

I do not like Donald Trump or Steve Bannon. They are bad people. I do not want to defend them. I am opposed to them. I think they will do awful things, and I think every attempt they make to do awful things should be met with opposition.

It frustrates me that I even have to say this. It frustrates me that the point I’ve been trying to make over the past few days somehow calls my disgust with Donald Trump into question. It frustrates me that every discussion about Trump is so deeply and relentlessly polarizing and painful that it is impossible to find a rational center where people can address the real problems and concerns of what a Trump administration will actually mean, and where people who passionately disagree can still find ways to peacefully navigate the difficult days ahead.

But my frustration is my problem. The larger problem, and the one that preoccupies me as I consider where our country is and where it is going, is that violence is becoming an acceptable option.

Of course, it was already acceptable for the racists and bigots who were Trump’s most vocal supporters, and now they have been emboldened by a bully’s victory. Everyone, including the vast majority of the tens of millions of people who voted for Trump, can see this violence for what it is. It is squalid and ugly, and it is easily identified as such. This kind of bile has always been with us, and it will likely always be with us. It cannot be tolerated, and it should not be defended. I’m confident that the vast majority of people in this country are people of good will who will not tolerate or defend such things.

What unnerves me is that there is a violence that many otherwise decent people will be willing to defend. It is a violence that cloaks itself in virtue, even though it is as squalid and ugly as the violence of racists. It represents itself as the violence of the righteous, or the violence of the oppressed. This violence is predicated on the principle that Trump’s victory is so completely unacceptable that morality provides no limit on the vehemence of an appropriate response. If you accept that principle, you start with peaceful protests, but you’re not willing to end there. If chants and signs and marches don’t bring Trump down – and (spoiler alert) they won’t bring Trump down – then escalation is not only acceptable, it’s imperative.

This kind of violence was not acceptable before Trump. It is becoming acceptable now.

From the last link:

Armenio says the girl hit her, threw her to the ground, pulled out her earrings and hair. She was left with a bloody nose and scratches and bruises.

Trump opponents even beat up a homeless woman who was trying to protect Donald Trump’s star on Hollywood Boulevard. 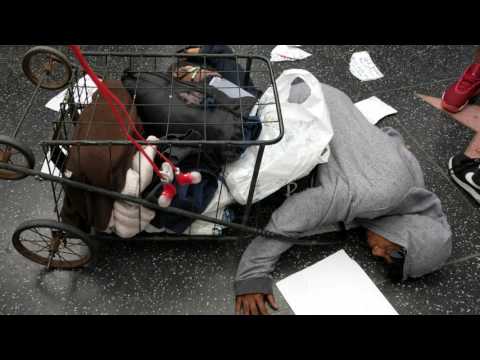 This is a small handful of examples. There are many, many more. And, if the current overheated rhetoric continues, there will be many, many more after that. People will get hurt, and people will die, and many of those outraged by violence from Trump-supporting racists will turn a blind eye to the so-called violence of the righteous. Some will even applaud.

This is not a good thing. This is a very, very bad thing.

Just as we need to oppose Donald Trump in his awfulness, we need to oppose violence from whatever source it may come. Your anger and frustration over Trump’s victory does not give you the right to punch a Trump voter in the face.

Trump/Hitler - Part II: Why It Matters
Not My Warden