For a brief, shining moment circa 1993, the name “Stallion Cornell” was in popular parlance at the University of Southern California School of Theatre, which severely irked a real-life theatre school professor with the surname Cornell, who thought I had chosen the name to make fun of him.

During my senior year, “The Other Cornell,” as I like to think of him, taught a class on directing that explained to actors who had spent almost four years in an intensive conservatory-style classroom setting how to use terms like “stage left” and “stage right.” One of his exercises involved putting a group of actors on stage and then using flash cards to direct them how to go. Should they go stage left? Stage right? Maybe “upstage?” Or “center stage?” So many pointless options.

“Go stage right!” he would read from his flash card.

Bam! Sure enough, the students on stage would then amble toward their right. That’s how it works. Because “stage right,” you see, is to the right of the person standing on the stage, although it would seem like left to the audience, which is looking at the action head on. It can be a very, very tricky business unless you, you know, think about it for a microsecond. Still, it was good that we were finally learning such things, as we had only been involved in a few dozen productions and about a zillion rehearsals and classes where the basics of theatrical rights and lefts were as rudimentary as which shoe goes on which foot. (The rule is “left shoe; left foot,” regardless of where you are standing on the stage.)

It wasn’t until after I graduated that I got a chance to really see these skills in action. My friend Ed and I returned to USC’s Bing Theatre in 1994 to watch their production of Cabaret, directed by none other than The Other Cornell. As we watched, people were unfailingly going left and right all over the place. Those flash cards really seemed to pay off.

If you’ve not seen Cabaret, a few plot points are necessary for you to appreciate the stupidity of what Ed and I experienced as we watched The Other Cornell’s uniquely boneheaded interpretation thereof. The story follows an idealistic American writer ensconced in Berlin during the early 1930s as the Nazis are rising to power. At one point, a collection of fresh faced youngsters come center stage and sing a pleasant little tune about deer and sunny meadows and birds and bees called “Tomorrow Belongs to Me,” which becomes chilling when you discover that these seemingly nice kids are actually the Hitler Youth, and the tomorrow they’re dreaming about is one where the world is under the jackboot of the Third Reich.

In “The Other Cornell’s” version, the song was performed in front of a slideshow of Hitler snapshots and photos of Nazi atrocities. Look! Concentration camps! And there are the book burnings. And then… there’s Ronald Reagan!

Ed and I looked at each other, bewildered. We were both thinking precisely the same thing – what’s Reagan doing up there?

I think this is when we both burst out laughing. Really? Reagan and Thomas rounded up six million people and slaughtered them because of their race? Isn’t that, I don’t know, kind of ridiculous?

The juxtaposition of Hitlerian horrors with modern-day mainstream conservatives continued unabated until the end of the song, as did our plentiful guffaws. This was a problem, because we were on the second row, and our friends were on stage, and they could see us all too clearly. “I know I was out of tune,” one girl snapped at us after the show, “but you didn’t need to laugh in my face.” We tried to explain that she was perfectly in tune and that her performance was marvelous – it was the director’s clumsy attempt at irony that had us busting a gut.

I thought of this when a friend of mine posted a wise captioned picture on Facebook. (I know, right? A Facebook meme that’s actually wise? What are the odds?) I share it here for your perusal. 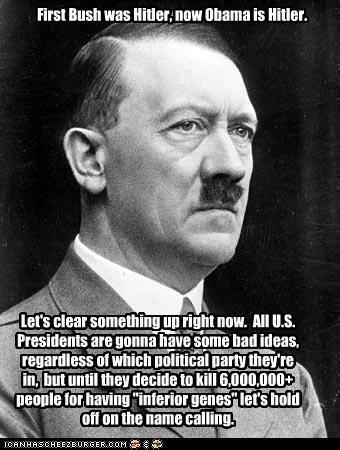 Amen. And I say that regardless of whether your politics are stage left or stage right.

So, to sum up: The Other Cornell had really weird cheek implants.