The title of this post maybe somewhat misleading. I am not a Catholic, nor do I have any intention of becoming a Catholic. But I’ve had the opportunity to contribute to editorials for the Deseret News about the retired pope and the newly elected one, and my admiration and respect for both men and the organization they were chosen to lead grows with each passing day.

So many observers were hoping and praying for a new Holy Father who would abandon both scripture and tradition and allow members of this venerable institution to ignore all teachings they find uncomfortable or inconvenient. Instead, they have been and will be led by men of integrity who stand fixed and immovable as the chasm between the values of the world and the values of the church grows ever wider. 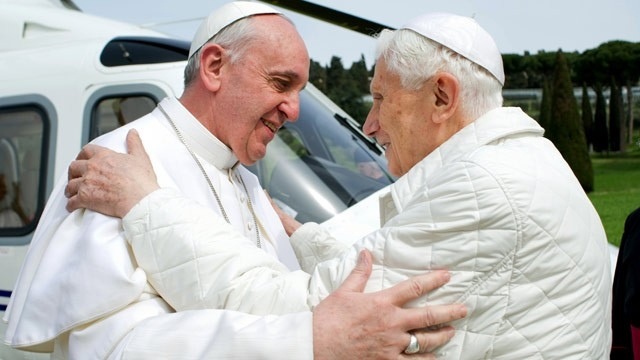 I greatly appreciate that, mainly because society at large is doing everything it can to marginalize the influence and even the validity of religion as an institutional participant in secular life. And I’m keenly aware of the fact that what’s going to happen to my church in that process is going to happen to the Catholic Church first.

I’ve thought about that these past couple of days as I’ve watched a slew of friends change their Facebook profile pictures to “equal” signs in support of legalized gay marriage. I’ve written enough on that particular subject that I have no interest in addressing the specifics again here. That debate has played out to the point where there are very few minds or positions to be changed with further discussion. Indeed, those equal signs are a clear indication that gay marriage opponents have lost the battle over framing the issue, and subsequently the entire war in the process.

From henceforth and forever, being opposed to any form of gay marriage for any reason is an announcement that you are a champion of inequality. It is tantamount to advocating the return of segregated drinking fountains and trying to get people who are different from you to ride in the back of the bus. All who advocate even the slightest degree of caution in redefining an institution that may well predate civilization itself can now be dismissed with no intellectual effort. Such people are now bigots, haters, homophobes. As such, they can no longer legitimately participate in the discussions that will shape the brave new world in which we now live.

Catholic charities and adoption agencies are getting tremendous pushback because of their unwillingness to ignore their own unpopular doctrines about the family. The pressure will continue to grow, and the church will likely find it difficult, if not impossible, to function as they have for centuries. The Catholic Church, as well as all other like-minded so-called religious bigots, will likely lose their tax-exempt status in the United States at the hands of the agents of equality who will use that noble ideal to equate Catholics and Mormons and their ilk with Klansmen or Nazi skinheads or any other kind of loathsome hate group that is rightfully despised by people of goodwill everywhere.

Again, it is already happening.

Please understand that I believe we are all equal in the sight of God, and we should all be equal in the sight of the law. No human being should be subject to cruelty or even unkindness, and hatred does nothing but corrode and destroy. Understand, too, that these are ideals I have been taught as bedrock principles of my religious faith. These are also ideals that are taught from every pulpit in the Catholic Church.

Eroding the influence of such religious voices may now seem to be a good idea in order to achieve certain policy goals, but the long-term effect will be an erosion of not just the institutions, but the morality they espouse that has done much to make the world a better place.

So, despite my many theological differences with my Catholic friends, I stand united with them in countering the movement to consign religious faith to the dustbin of history. When it comes to defending the right to faith, we are all Catholics now.

Hell
My Dog, He Is Fat