I never liked Will Riker.

I’m not sure if it was how Jonathan Frakes portrayed him, or whether it was part and parcel with how bland “Star Trek: The Next Generation” was in total, but the fact was that the Enterprise-D’s first officer always struck me as a bush league James T. Kirk rip-off, minus the charisma and cojones.

So when my fat dog chewed up my Will Riker action figure, I wasn’t too upset about the whole thing. The guy deserved it. Especially after he grew the beard. 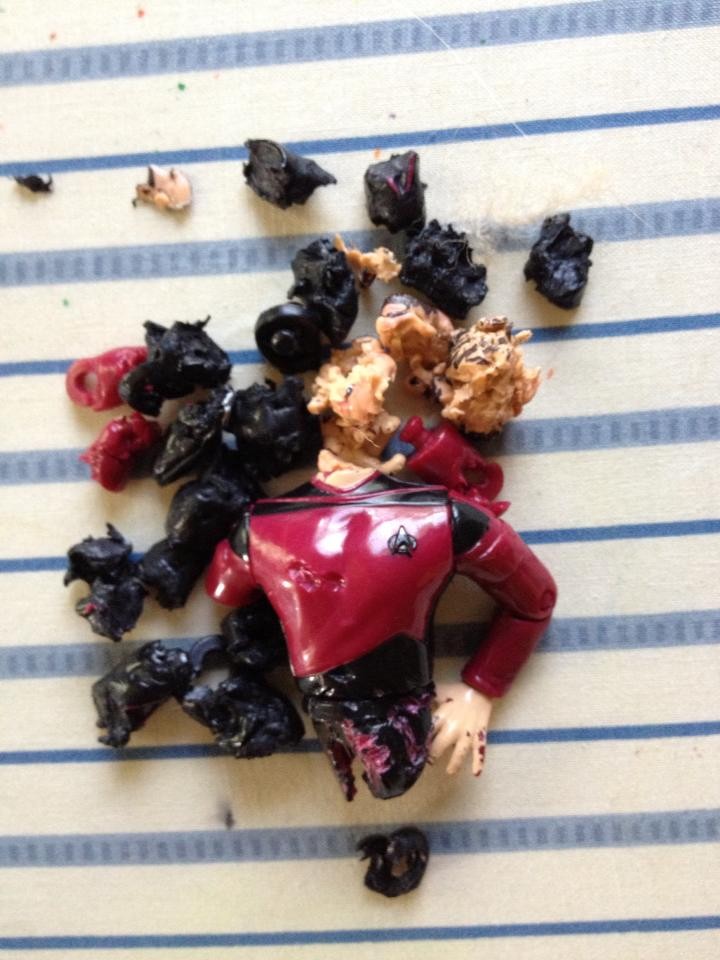 I had originally planned to keep this as a cheap token recording my dog’s dental records, but a friend offered to put it up for auction on eBay! It has a starting bid of only $.99, with a reasonable $2.00 shipping and handling fee.

WILL RIKER HAS BEEN DISMEMBERED!

This vintage action figure of the Star Trek: The Next Generation figure met its demise when visiting an alien planet.  Thankfully, the crew of Enterprise were able to transport the remains back to the ship!

Due to a special camera embeded in his uniform, the crew has identified the alien and are currently planning revenge for their fallen comrade (please see photo #2)…  Will they cut off its biscuit or water supply?  Will they load weapons with fleas and ticks and venture to the planet’s surface?  Can they withstand the lovability and kisses they would receive when they got down there?

Here is your opportunity to own the remains of this figure’s last adventure.  You will receive Riker in his current condition (photo #1).

This item definitely comes from a home with a pet.

Live long and prosper, my friends.  At least longer than this poor Will Riker figure.

No takers. Maybe everyone hates Riker just as much as I do. But I’m surprised that most people aren’t jumping at the chance to by a mutilated piece of plastic. I was hoping the sale of this thing would put my kids through college.

I mean, seriously, would it kill you to bid?

Corroding the Container
Return of the Blog - Moist Board still coming