When my father passed just over two years ago, the media was filled with laudatory tributes to him that brought a great deal of comfort to all of us in the family. The problem was that most of these were posted on websites that included comment sections.

“Don’t read the comments” is the best advice I have ever given that I have never followed myself. Of course I read the comments. And the good news is that, in this instance, the overwhelming majority of them were entirely appropriate condolences. But far too many of them were not. Some people thought his death provided the perfect opportunity to settle old, and now meaningless, political scores, and a handful decided to seize the day by crowing, “Ding, dong, the witch is dead.”

I’m not paraphrasing. That was an actual comment, verbatim. There was no other substance or elaboration, just a terse expression of raw glee that my mother was now a widow and that I had lost my father. And as I stared at that slice of congealed bile for what seemed like forever, I tried to understand the rationale of the person who would say such a thing.

Now I can fully understand having unkind thoughts about public figures when they pass away, as I have had far too many of those myself. But the idea of immediately broadcasting those thoughts to the world at large in forums where the family of the recently deceased can read them is unfathomable to me.

If Mr. Ding Dong had met my mother on the street, would he have had the temerity to repeat his nasty mantra to her face? Would he be willing to come to either of my father’s funeral services, both of which were open to the public, and stand up and burst into song with his Oz-themed hatred?

Well, he didn’t, and neither did anyone else. That suggests that the anonymity of the Internet provides an easy outlet to be ruder than we would ever dare to be in real life. Except anonymity isn’t a mandatory requirement for an online license to be unkind.

I had a neighbor – in Mormonspeak, he was a “member of my ward” – who I knew casually and with whom I sang in the ward choir. He seemed a decent enough fellow, and he was a big fan of Evan McMullin, the independent presidential candidate who ran in 2016 and got 22% of the vote in Utah. He moved out of our neighborhood not long after the election, and I joined an Evan McMullin Facebook group in which I was a lurker while my former neighbor was an active participant.

When the formation of the United Utah Party was publicly announced, my neighbor jumped into the FB group to warn fellow McMullin fans that my new party was dishonestly pretending to be moderate, but he had talked to one of its founding members who had admitted to him that we were really interested in tricking people into accepting huge tax increases to fund vast expansions of touchy-freely social programs.

I jumped in immediately and pointed out that I was likely the founding member he had talked to, and I had never said any such thing, nor had any such idea ever been discussed in behind-the-scenes party conversations. He responded that while it was, indeed, someone other than me who had unwittingly divulged our diabolical agenda, I was still clearly lying to everybody when I denied that this was the UUP’s conspiratorial purpose.

I was flabbergasted. It’s one thing to say you disagree with what the UUP stands for, as that’s an entirely legitimate position to take. It’s quite another to publicly call me a liar with no evidence to back it up.

We exchanged a number of private messages, and he was far less willing to stand by his empty accusations away from the glare of the group spotlight. He finally said, “Look, it’s just politics.” I responded, “No, it’s just rude.” We are no longer Facebook friends, and I’m grateful we’re no longer neighbors. Political discussions do not relieve you of the responsibility to treat other human beings with kindness and respect.

The most recent example of this kind of bad behavior came in my Facebook thread discussing the Brett Kavanaugh Supreme Court nomination. I don’t want to rehash the argument, but I would like to highlight the reaction of one Solomon Kleinsmith, a man I have never met, do not know, and can no longer contact now that he has blocked me on Facebook.

Mr. Kleinsmith is apparently a blogger who claims to have influence over thousands, although I can’t find anything online that he’s written publicly in the past few years. I accepted his friend request during my campaign, and I hadn’t paid any attention to him until he jumped into this thread to offer the following bon mot:

Good lord… I cannot believe I threw several thousand people toward your candidacy in a positive way. I won’t be making that mistake again. If you believe this sort of logic, there is no way you could be trusted with high office. 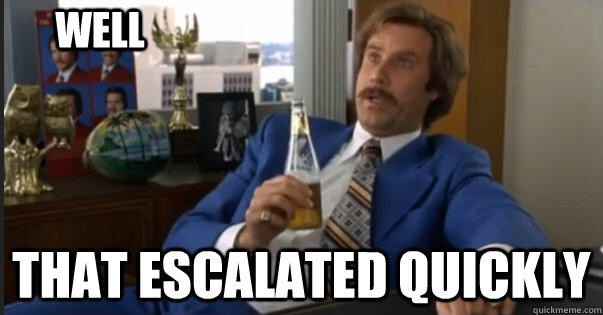 I was quite startled by this, as I didn’t think I had said anything so far outside the bounds of propriety that it merited this kind of reaction, nor did I realize that I owed so many of the votes I had received to Solomon Kleinsmith. I tried to de-escalate the situation and point out that I was no longer running and had no plans to run again, so that made both our lives easier. I then attempted to redirect the discussion back to ideas instead of insults. But the good Mr. Kleinsmith was having none of it:

Good lord – you really are a politician, aren’t you?… Dishonest politicians like you are so much of what is wrong with our political system… Goodbye, and good riddance to bad rubbish.

I was defriended and blocked immediately thereafter.

All right, so what’s my point?

My point is not that I think we shouldn’t be passionate about politics or that we need to tiptoe around each other when engaging in spirited debate. I very much enjoy vigorous disagreements about ideas with good and wise people who have different opinions than I do. It’s when these disagreements turn into discussions about what a terrible person I am that I lose interest very quickly. When that’s the way it starts to go, I’ll often stipulate from the outset that I’m the worst person who has ever lived, so we can stop wasting time finding evidence for my awfulness and focus on ideas instead.

We live in an era where basic human decency is in increasingly short supply, especially when we enter the political arena. Donald Trump is a symptom of our national indecency disease, but, to mix metaphors, he didn’t start the fire. We have increasingly found excuses to be unkind to each other, when we need to find excuses to be precisely the opposite. If we’re going to dig out of the ad hominem pit in which we find ourselves, we need to listen to each other and find ways to disagree that allow us to pleasantly sit side by side in the ward choir together when the conversation is over.

This is how I intend to conduct myself for the remainder of my time on this earth. Although in the online comments for my obituary, I fully expect one from “S. Kleinsmith” that reads “Ding, dong, the witch is dead.”