While going through my father’s papers, my mother stumbled on this shocking exposé from a 1957 edition of the Daily Utah Chronicle, the University of Utah’s student newspaper. I now have to reevaluate my whole life and come to terms with my father’s scandalous past. 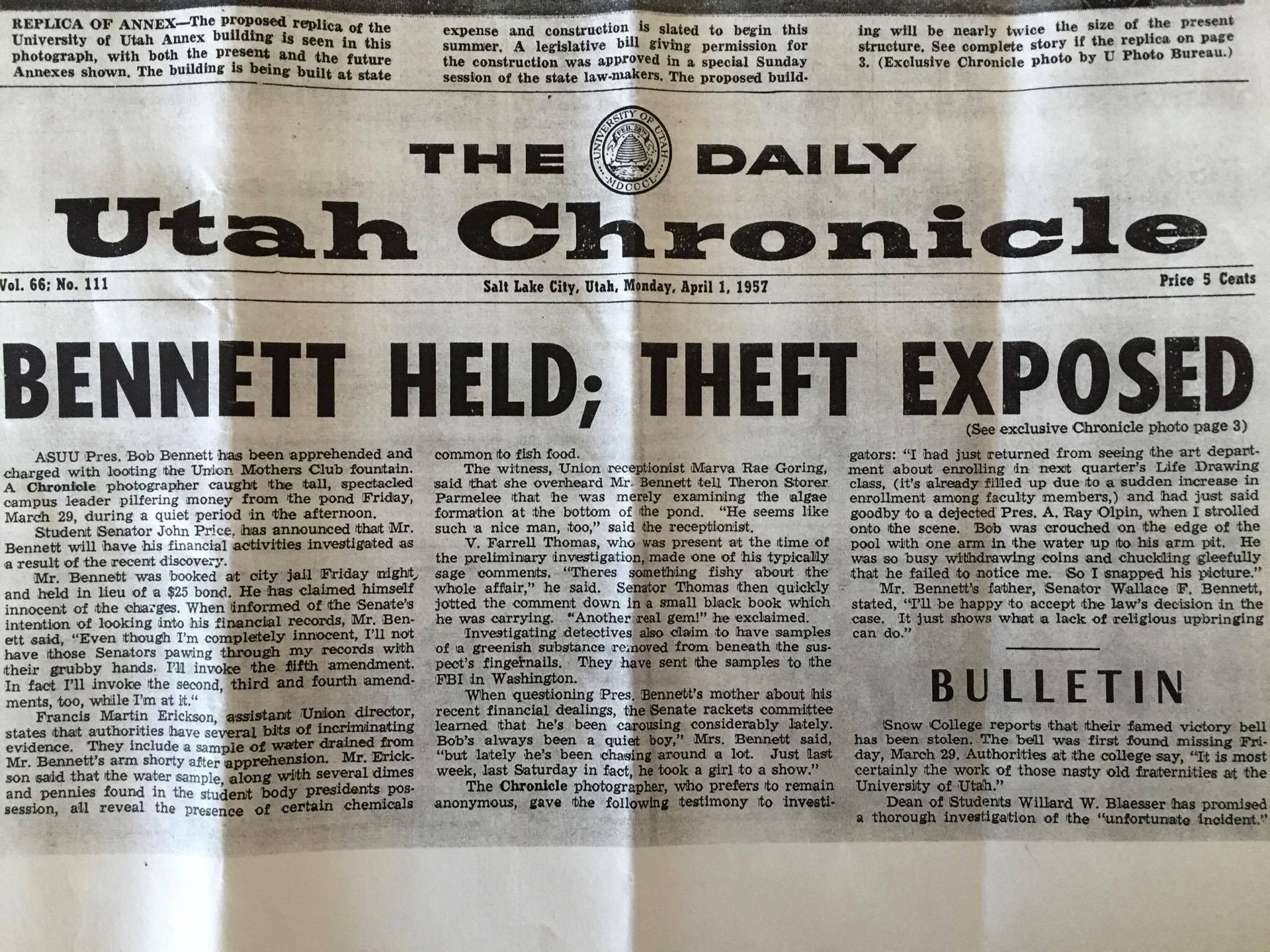 Text of the article:

ASUU Pres. Bob Bennett has been apprehended and charged with looting the Union Mothers Club fountain. A Chronicle photographer caught the tall, spectacled campus leader pilfering money from the pond Friday, March 29, during a quiet period in the afternoon.

Student Senator John Price has announced that Mr. Bennett will have his financial activities investigated as a result of the recent discovery.

Mr. Bennett was booked at city jail Friday night, and held in lieu of a $25 bond. He has claimed himself innocent of the charges. When informed of the Senate’s intention of looking into his financial records, Mr. Bennett said, “Even though I’m completely innocent, I’ll not have those Senators pawing through my records with their grubby hands. I’ll invoke the fifth amendment. In fact I’ll invoke the second, third and fourth amend-ments, too, while I’m at it.”

Francis Martin Erickson, assistant Union director, states that authorities have several bits of incriminating evidence. They include a sample of water drained from Mr. Bennett’s arm shortly after apprehension. Mr. Erickson said that the water sample, along with several dimes and pennies found in the student body presidents possession, all reveal the presence of certain chemicals common to fish food.

The witness, Union receptionist Marva Rae Goring, said that she overheard Mr. Bennett tell Theron Storer Parmelee that he was merely examining the algae formation at the bottom of the pond. “He seems like such a nice man, too,” said the receptionist.

V. Farrell Thomas, who was present at the time of the preliminary investigation, made one of his typically sage comments. “There’s something fishy about the whole affair,” he said. Senator Thomas then quickly jotted the comment down in a small black book which he was carrying. “Another real gem!” he exclaimed.

Investigating detectives also claim to have samples of a greenish substance removed from beneath the suspect’s fingernails. They have sent the samples to the FBI in Washington.

When questioning Pres. Bennett’s mother about his recent financial dealings, the Senate rackets committee learned that he’s been carousing considerably lately. “Bob’s always been a quiet boy,” Mrs. Bennett said, “but lately he’s been chasing around a lot. Just last week, last Saturday in fact, he took a girl to a show.”

The Chronicle photographer, who prefers to remain anonymous, gave the following testimony to investigators: “I had just returned from seeing the art department about enrolling in next quarter’s Life Drawing class, (it’s already filled up due to a sudden increase in enrollment among faculty members,) and had just said goodby to a dejected Pres. A. Ray Olpin, when I strolled onto the scene. Bob was crouched on the edge of the pool with one arm in the water up to his arm pit. He was so busy withdrawing coins and chuckling gleefully that he failed to notice me. So I snapped his picture.” 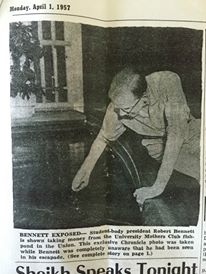 Mr. Bennett’s father, Senator Wallace F. Bennett, stated, “I’ll be happy to accept the law’s decision in the case. It just shows what a lack of religious upbringing can do.”