Didn’t watch the president’s speech last night. Early reviews suggest that he didn’t rise to the rhetorical standard set by Clinton, whose speech I didn’t watch because it literally made me sick to my stomach. Which literally brings me to the subject of today’s post, which is Joe Biden’s speech, which I literally watched.

And if you think I’m overusing or misapplying the whole “literally” motif, I literally don’t even come close to Bidenhood. 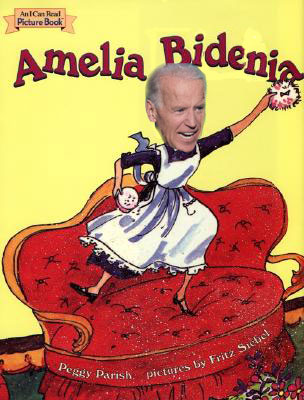 The good vice president gave a passionate and credible speech, but I kept being reminded of Amelia Bedelia, the maid in all those children’s books who can’t distinguish between the literal and the figurative. So when she’s asked to draw the drapes, she doodles a picture of curtains, and when she’s told that to make dinner she has to first dress the chicken, she therefore puts a hen in a miniskirt. Joe Biden has the same problem in reverse; he’s constantly using the word “literally” to intensify a figurative expression. Last night, he concluded by saying the “future is literally, not figuratively but literally, in your hands.” At the time I heard those words, what was literally in my hands was an iPhone and a dog leash. I did not then, nor have I ever, corporeally grasped an intangible concept like the future. The future has no substance or matter. One cannot literally handle it with any part of the human body at any time.

So as he invoked the inverse of Amelia Bedelia, I couldn’t help but mentally assume the persona of Inigo Montoya. “Mr. Biden, you keep using that word. I do not think it means what you think it means.”

Just so we’re all figuratively on the same page here, a literal expression is one where the words are assumed to mean exactly what they say. So, for example, comedians often use the word “killed” to describe a particularly good performance, e.g. “Did you see Seinfeld at the Improv? He killed last night!” People who are not Amelia Bedilia would hear that, recognize the figurative idiom, and not presume that Jerry Seinfeld committed murder sometime after 6:00 PM. But if Joe Biden were to tell the story, he’d probably say, “Seinfeld was amazing! He killed – he literally killed last night!” And then even the least Bidelia-esque among us would have to wonder if he got Kramer to dispose of the body.

Thus we were told by our figuratively literal veep that at the beginning of the president’s term, the nation “literally stood at the edge of a great depression.” We were left to ourselves to decide whether he was referring to the population or the landmass. Were all 300 million of us standing at the mouth of this crater, or did a large chunk of the North American continent rise up out of the ground, sprout legs, and assume a watchful vigil at the edge of the depressed hole from which it sprang?

The American auto industry, we were informed, was so at risk that at some point, it “literally hung in the balance.” One can only speculate as to the nature of the ropes, chains, or wires employed to hoist all the factories and workers into the air! And, remember, they were only one half of the balance in which they were hung. I’m thinking that several aircraft carriers and a smattering of Home Depot stores were suspended by pulleys in order to form a suitable counterweight.

If this massive midair suspension weren’t enough, we also learned that General Motors was “literally on the brink of liquidation.” Probably, it is only logical to assume, this took place at the same time it was literally hanging in the balance. Had this liquidation occurred, the ensuing deluge would have flooded three quarters of the state of Michigan. Our only hope would be if the country were still anthropomorphized and patrolling the literal great depression’s edge, thereby allowing the goo that was once GM to ooze into the ponderous hole’s murky depths.

Biden used the word in other ways, too, that aren’t quite as absurd but still left me literally scratching my head. (My psoriasis helped with that, too.) What does it mean, I ask you, when Biden claimed that something “literally amazed” him? What is the difference between literal amazement and figurative amazement? Only Amelia Bedilia literally knows for sure.

Thats why Obama should drop Biden and put her on the ticket. Literally.

Yes. You heard me. The president of the United States should heft his current vice president above his head, let go of him, and then watch him fall to the floor with a mighty thud. Then he should get the ticket printed and physically place Amelia Bedelia upon it. It should be a large enough ticket that she should be able to sit comfortably and perhaps have room to spread out a picnic lunch, but that will make it very hard for a ticket taker to redeem the ticket, especially if she gets mustard on it.

Oy. I’ve literally stretched this gag as far as it can go. I can literally see the stretch marks.

The Base Convention
Daniel Z. Was Right: Plus other thoughts on the state of the race