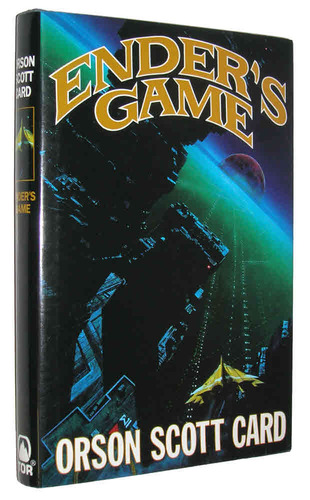 Truly stunning news out of South Carolina today, as we learn that a middle school teacher has been suspended for reading Ender’s Game to her students. The sci-fi classic is apparently “pornographic,” and the teacher may end up losing their job over this.

Had I known the way to get rid of a lousy teacher was to get them to read a dirty book, I’d have plenty of reading recommendations for my instructors over the years. Those recommendations surely wouldn’t have included Ender’s Game, which doesn’t have an ounce of sex in it. Correct me if I’m wrong, as I don’t have a lot of experience in these sorts of things, but isn’t pornography supposed to be sexy? Any smut peddler with Ender’s Game in their product line is going to go out of business very quickly.

That’s not to say Ender’s Game could ever be confused with a Disney princess film, as it has a smattering of vulgarities and isolated scenes of unsettling violence. But has anyone in a South Carolina middle school read The Hunger Games? It’s ten times more violent than Ender’s Game, and it’s poised to be the biggest movie of the year. My middle school-aged daughters bought their midnight showing tickets weeks ago. Would I be able to submit my eighth grade book report on Lord of the Flies to a South Carolina middle school? For crying out loud, how about Harry Potter? The body count in those books is ridiculous, and there’s snogging in them besides!

It gets confusing to try and define what is and is not offensive. When I used to review movies, it was my job to count swear words and chronicle acts of sex and violence in order to warn people away from inappropriate films. I remember reviewing a truly execrable flick called Cop and a Half, starring Burt Reynolds in a really bad toup. This movie had violence aplenty, including several uncomfortable moments where a young child elbows grown men in the crotch. It was the kid’s signature move, and it was always played for laughs. Had the violence in the movie had real world consequences, the movie would’ve been rated R. As it was, the film got a PG rating, because all of the violence was treated as if it never happened three minutes later, so it then becomes silly, not shocking, to see men with damaged testicles double over in pain.

That’s one of the reasons I get uneasy whenever my kids watch the Home Alone movies. Unlike Joe Pesci and Daniel Stern, real people who get bricks dropped on their heads from five stories up or slip and fall, back first, down an iced-up stairwell tend to, well, die. Yet as the Home Alone mayhem piles up, so do the giggles.

Compare and contrast that with the violence in Ender’s Game. There are two scenes where the titular protagonist is faced, one-on-one, with a merciless attacker who intends to kill him. Ender responds with blunt force, and the scenes are brutal, harsh, and disturbing. The book portrays violence as a messy, terrible thing with stark consequences. That lesson may not sit well with many a parent or child, but isn’t that a better message than the idea that all violence is cartoon violence, that the Coyote can always get back up and chase the Road Runner again even after plummeting from a thousand-foot cliff?

Between Ender’s Game and Home Alone, which of the two is more likely to inspire kids to try this at home?

Believe it or not, I’ve had some personal experience with this. A couple years back, longtime followers of my blog were enlisted as beta readers for a novel that, at one point, I was finally able to get a prominent publisher to read. They liked it, but they asked for a new draft with the violence toned down and the “sex” removed entirely.

The rules they laid out for any violence were a little warped. People were allowed to die, but not by natural or sloppy means. In other words, they could magically vanish, but they couldn’t be hit by a car. Absolutely no blood. People could still tussle with each other, apparently, but they couldn’t break the skin.

So I rewrote it, and they claimed to like it even more, but, in the end, they still passed. So I’m rewriting all the naught bits back into it. I mean, come on! If kids in South Carolina can’t read Ender’s Game anymore, I’ve got to put something spicy on their Kindles.

“Nakedly, he elbowed the dude in his little factory…“